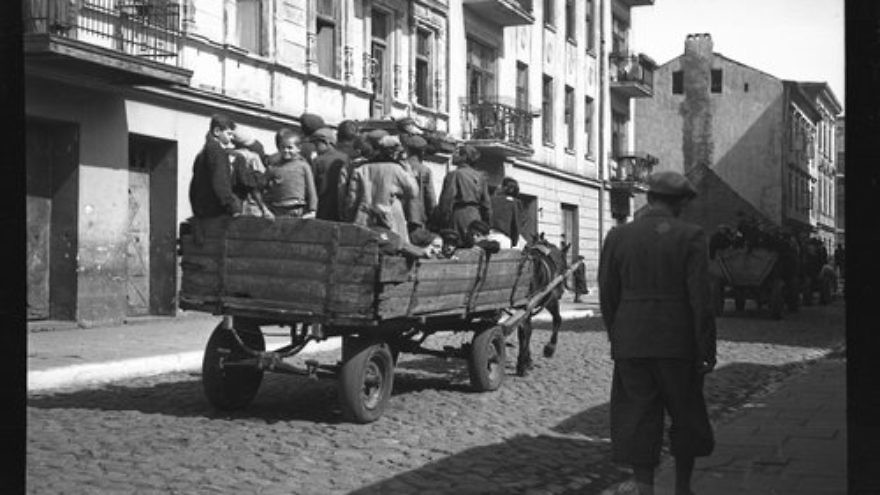 Children are transported from the Lodz Ghetto to the Nazi concentration camp of Chelmno in 1942, in one of the photos on display as part of the “Memory Unearthed: The Lodz Ghetto Photographs of Henryk Ross” exhibit. Credit: Courtesy Museum of Fine Arts, Boston.
Republish this article
848 WORDS
Spread the word.
Help JNS grow!
Share now:

Susan Salzberg was the first to spot her late father-in-law’s face—a face with a striking resemblance to that of her 22-year-old son, Ari. In the photo, her father-in-law, who is pictured perched on a bread cart, is roughly the same age Ari is now.

Indeed, one of Lewis Salzberg’s jobs in the Lodz Ghetto was to hand out bread rations, according to Susan’s husband and his son, Stuart Salzberg.

But since as many as 200,000 Jews passed through the Lodz Ghetto from 1939-1944, the Salzberg family hardly expected to see Lewis among the images in “Memory Unearthed: The Lodz Ghetto Photographs of Henryk Ross,” an exhibit on display at Boston’s Museum of Fine Arts (MFA) through July 30.

Ross’s lens caught the pain and pathos of the Jews remanded to the Holocaust era’s second-largest ghetto after the Warsaw Ghetto. Soon after Germany invaded Poland, like Lodz’s other Jews, the Salzbergs—father, son and two daughters (Lewis’s mother died in childbirth and his older brother was already taken by the Nazis)—were evicted from their comfortable home and sent to a room in the congested ghetto, with only a curtain dividing them from another family.

Ross, a Jewish photojournalist, was assigned by the Nazis to photograph ghetto dwellers for ID cards and idealized public relations shots. Unofficially—and at great personal risk—he also used his camera to document a child dying of hunger on the street, a cart laden with corpses, a mother touching her young son’s head for the last time across barbed wire, a man picking up his fellow from a snowy sidewalk and a solemn procession of Jews being marched to their deaths.

Many of these photos were snapped from inside Ross’s coat, through boards pried away from walls and during surreptitious midnight forays to the railway depot documenting deportation to a death camp.

“This exhibit tells the story of one man’s act of resistance through photography,” the exhibit’s wall notes state. “These photos bear visual and emotional witness to a harrowing period of history.”

In August 1944, the Salzbergs got word of the planned liquidation of the ghetto. The family hid for three days behind a fake wall they erected in their room. Faint with hunger and convinced the Germans had finally left, they emerged to warm up some food. But the Nazis returned and felt the warm stove, and began shooting. The family members surrendered and were taken to the Auschwitz concentration camp with nearly all of the ghetto’s other remaining Jews. Lewis would never see his sisters again, and when he asked where his father had gone, a man pointed to the plume of smoke rising from the crematoria and told Lewis, “Say Kaddish,” referring to the Jewish mourner’s prayer.

Sensing the war’s end was near, the photojournalist and his wife, Stefania, buried thousands of negatives under the ghetto, in iron jars inside an iron-rimmed box. “I was anticipating the total destruction of Polish Jewry,” Ross says in a video shown in the exhibit. “I buried the negatives in the ground in order that there should be some record of our tragedy.”

When the ghetto was liberated by the Russians in early 1945, Stefania and Henryk Ross were among the 877 Jewish survivors. Later, when digging up the trove of negatives, they were amazed by how many emerged unscathed. They moved to Israel, and in 1961, Henryk testified at Adolf Eichmann’s trial, where the photographer and his photos spoke volumes of the true story of the Lodz Ghetto. Ross died in 1991. Now, Boston’s MFA is the first American museum to exhibit his photos.

Irv Kempner, a neighbor of Susan and Stuart Salzberg in Sharon, Mass., also brought a deeply personal connection to the exhibit. In 1940, his paternal grandparents were shipped to the ghetto from Kalisz, Poland, and were later deported to Chelmno concentration camp, where they are assumed to have been killed.

“‘Memory Unearthed’ provided me a rare glimpse of life inside the ghetto,” said Kempner. “I was transported back in time and felt the pain and fear of my grandparents not knowing when or where they would be taken, and worrying about the fate of their only son, my father David. Unlike them, he would survive.”

Lewis Salzberg also survived. Transferred from Auschwitz to a work camp in Hanover, Germany, he was liberated by the Americans. Having heard that his older brother was spotted in a displaced persons camp, Lewis embarked on a search that reunited him with his brother. In 1950, the brothers moved to Boston, where they opened a clothing store. Lewis died in 2002, just shy of his 79th birthday.

The MFA exhibit has touched observers of all backgrounds—not just those with personal connections to the photos, and not just Jews.

“I was too young to know what was going on then. I turned 5 the day after the ghetto was liberated in 1945,” Denise Morin of Marlboro, Mass., said as she exited the exhibit. “I’m Catholic, but these pictures speak to everyone.”