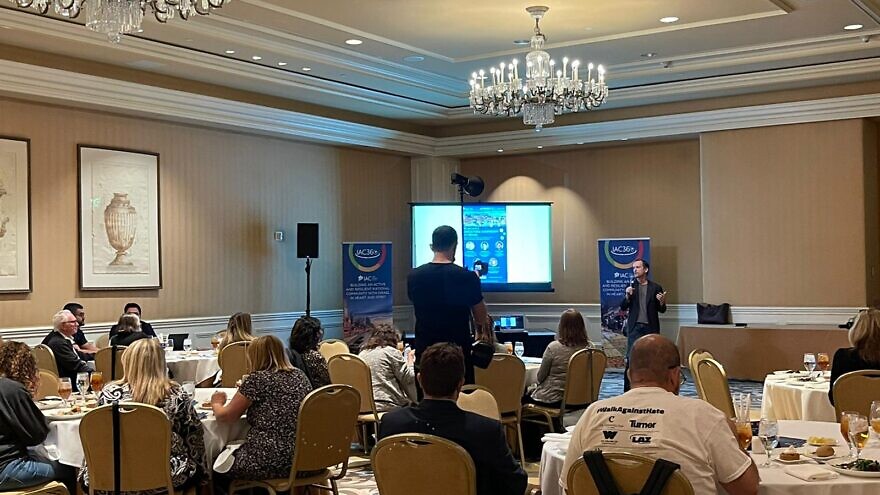 The United Educators of San Francisco in May became the first teachers’ union in the country to pass a resolution supporting BDS. In September, while United Teachers Los Angeles voted to postpone a pro-BDS resolution, San Diego’s American Federation of Teachers Guild stated that “condemning Israel for its ethnic cleansing of Palestinians, occupation, apartheid and war crimes is not anti-Semitism.” Audio leaked in October revealed a school-district administrator in Texas telling teachers to balance Holocaust-related books with “opposing” views.

“There is a rise in anti-Semitism in America, especially in the education system,” Noa Peri-Jensch, national senior director of strategy for the Israeli-American Council (IAC), told JNS. “We are seeing committees and teachers’ unions that I personally think, after two years of COVID, would have so much urgency about how to overcome learning gaps, how to take care of domestic abuse, and all kinds of issues students are facing. But out of all these burning issues, what we are seeing in some places is that the top priority is how to turn the teachers’ union into a BDS-supporting union. Why? Where is that all coming from?”

One of the IAC’s responses to this phenomenon is a recently launched pilot program for educators that aims to dispel misinformation and deepen understanding about Israel. The initiative, which the IAC aims to expand nationally, held its first event on Oct. 17, a symposium for Nevada educators featuring sessions on Israel’s contributions to innovation, technology, science and culture. Presenters included David Brog, executive director of the Maccabee Task Force; Jake Bennett, IAC for Action’s director of policy and legislative affairs; Idan Udi Edry, an Israeli serial entrepreneur; Karin Hochman, a professor of music and Hebrew at University of Nevada, Las Vegas; and Alexandra Emtsova, owner of the Burnt Offerings kosher restaurant in Las Vegas.

“We wanted to bring the teachers to the room and give them a positive way of looking at Israel—not so much showing the conflict, and instead, giving them tools that they can take into the classroom and teach about Israel in a positive way, to look at Israel as a place of innovation and technology, of literature and art,” said the IAC’s Las Vegas region director Ofra Etzion. “We know that when you educate the next generation, they are going to take it forward. They are going to be our ambassadors when they go to college.”

“To understand Israel’s internal diversity and inclusion, people need to be presented with truth and facts to counter the lies and distortion of the BDS hate movement,” he told JNS. “I started by sharing a number of photos of Israeli daily life—for instance, pictures showing Jewish, ultra-Orthodox and Muslim individuals sitting side by side at a cafe, in a university lecture or on a public bus. This negates the libel of anti-Israel hate groups that Israel is an apartheid state. I then showed some photos of Israeli Arabs, Druze and Bedouin who serve in the police, military, government, courts and hospitals, again to dispel the myth of apartheid and government-sanctioned discrimination.”

Bennett proceeded to define the words “Zionism” and “indigeneity” for the educators with the goal of dispelling the myth of Israeli “colonialism.”

“Zionism is the self-determination movement of the Jewish people in their ancestral homeland. Indigeneity is defined by ethnogenesis, the origin of a people, followed by continuous links of language, history, blood, culture and spirituality to a place,” he explained. “Everything about the Jewish people—whatever each family’s pathway during the long diaspora—ties us to the land of Israel.”

Both Etzion and Peri-Jensch said their children have witnessed far different narratives on Israel taking root in Nevada schools, including when one of Peri-Jensch’s daughters wore an Israel Defense Forces’ T-shirt and was accused by fellow students of supporting a “military that kills babies.”

‘There is so much more to our story’

Yet another classroom incident gave Peri-Jensch hope, as well as the motivation to launch the IAC educators’ initiative. Four years ago, her older daughter’s teacher told students that everyone had paid attention to Kim Kardashian’s outfit, but “none of you know that Israel attacked Syria last night.” Her daughter wrote to the teacher about how those comments made her feel, and that there is more nuance to the news report on Israel and Syria. The teacher acknowledged that Peri-Jensch’s daughter “opened my mind” about the issue. Four years later, when Peri-Jensch’s younger daughter took a class with the same teacher, the educator encouraged her to speak up when anything discussed in the classroom might be offensive or misleading.

“It made me think that there are so many teachers who want to know more, but they don’t have the opportunity,” said Peri-Jensch. “Israel is a fascinating subject, but it has become very controversial in the school setting. We wanted not to become the experts on the conflict or who ‘rules’ Israel. But if we are able to develop for educators a positive relationship to Israel through science and innovation and arts and history, and show how some things can be misunderstood, then next time there’s a military operation in Gaza and social media is flourishing with hate and bias, those teachers will have that moment where they say, ‘Hold on, it doesn’t all sound true. Let me look into that before I go to class and say, ‘Israel bombed Syria last night.’ ”

Forty-five educators registered for the recent Nevada symposium—a room divided into thirds between educators with very little knowledge about Israel, those with some knowledge but “not enough” and those who attended mainly for the social networking aspect of the experience, according to Peri-Jensch.

Bennett said a number of teachers requested copies of his presentation.

“Based on a few of those conversations, I think what attracted them was the big-picture context I provided that filled in some gaps for them, buttressed with the granular details, photos and maps,” he said. “I gather that many adults, educators included, are walking around with an overly simplified, Euro-centric narrative about the re-establishment of Jewish sovereignty in the Land of Israel that starts either with Herzl or the Holocaust and ends with U.N. recognition and Israel’s War of Independence. But there is so much more to our story than that.”

He added that “the Jewish, Israeli and Zionist story is full of complexity, both ancient and modern at the same time, and encompasses a vast civilization, including various streams and traditions of music, culture, foods from far-flung lands, Torah-learning, God, film, fine arts, science, business, outdoor adventure, nature, geography, archeology, history, debate, politics, military and civil defense, romanticism and cynicism. Our teachers and our children need to be taught Israel’s beauty and complexity in order to appreciate it.”

The symposium was particularly important, Bennett noted, in light of the recent pro-BDS initiatives promoted among teachers’ unions and other entities in California and across the nation.

“An ounce of prevention is worth a pound of cure,” he said. “The BDS hate movement’s lies could not take root if educators had a basic foundation in the history of the Jewish people and the Middle East region. Lacking that, anti-Israel libels of colonialism, apartheid and racism are able to achieve their aim: playing off people’s general ignorance, demonizing Israel, and creating anti-Israel sentiment and activism.”