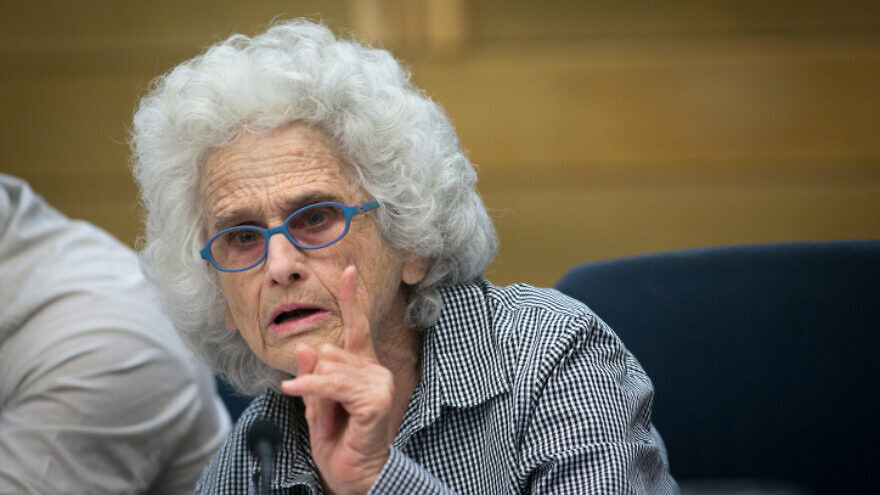 Ruth Gavison attends a discussion on the nation-state bill in the Knesset on Sept. 18, 2017. Photo by Miriam Alster/Flash90.
Spread the word.
Help JNS grow!
Share now:

Gavison, a founder of the Association for Civil Rights in Israel, was one of the country’s most prominent, original and influential researchers and teachers in the field of law. Her opinions were sought after both at home and abroad.

Among her many awards, she won the Israel Prize, the country’s highest civilian honor, in 2011. Others included the Avi Chai Prize (in 2001) and the Cheshin Prize (in 2009). She was also granted honorary doctorates from the Jewish Theological Seminary in New York (in 2003) and from Israel’s Bar-Ilan University in Ramat Gan (in 2009).

A member of the Israel Academy of Sciences and Humanities, Gavison was best known for her research and body of work on issues of religion and state, as well as on that of Israel as a Jewish and democratic state. It was her often controversial views on these issues that, according to former Justice Minister Daniel Friedmann in 2007, prevented her from securing a majority to secure a seat on the Supreme Court, for which she was nominated in 2005.

She served as a member of the Winograd Commission, which investigated the failures of the 2006 Second Lebanon War and whose findings were released in January 2008.

“Her sharp and complex thought did not allow anyone to label her, and her perception was always crystal clear and distinct. Through her words and actions, Gavison dedicated her life to the connection of Israel as Jewish and democratic, democratic and Jewish in one breath. We will greatly miss her voice, which has been taken away from us as a society and as a country,” he said.

Israeli Prime Minister Benjamin Netanyahu said in a statement that Gavison’s “unique voice was heard loud and clear, even when it was unacceptable or by consensus.”

“Many times she refused to accept the accepted legal assumptions and led independent, courageous and groundbreaking positions that challenged the legal discourse and would leave their mark for many years. May her memory be blessed,” he wrote.