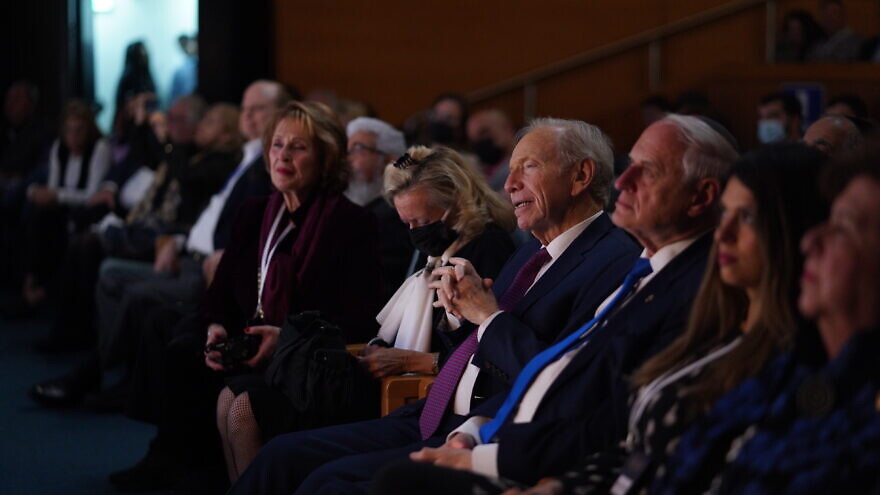 (March 14, 2022 / JNS) America, the four other permanent U.N. Security Council members and Germany should realize that allowing Russia to get away with its invasion of Ukraine “will encourage countries like Iran to be more aggressive with its neighbors,” former Sen. Joseph I. Lieberman told JNS on Sunday.

“For too long, the people in the United States and Europe did not really believe [Russian President] Vladimir Putin when he said he was going to take back Ukraine, and for too long we have not taken seriously the supreme leader of Iran when he calls America the Great Satan and Israel the Little Satan, and when their proxies attack our Sunni Arab allies, such as the United Arab Emirates and Saudi Arabia,” said Lieberman.

Russia’s invasion of Ukraine was a reminder that there are nations “you simply cannot trust,” he continued. “You have to listen to their words even if they sound extreme.”

The former senator spoke to JNS on the first night of the Begin Symposium in Jerusalem honoring 30 years since the death of Prime Minister Menachem Begin, an event titled “Securing the Nation.”

Lieberman served as a senator from Connecticut from 1989 to 2013, leaving politics only months before the Joint Comprehensive Plan of Action (JCPOA) Iranian nuclear deal was signed between Iran and the P5+1 countries in Geneva in 2015. The deal remained in effect until the United States withdrew from it under former President Donald Trump in May 2018.

The Iran deal signed under former President Barack Obama, stated Lieberman, “was a terrible mistake” as it undid what U.S. legislators had worked so hard to accomplish: the adoption of economic sanctions that could be removed only in return for an end to the Iranian nuclear program.

“Much less than that happened in 2015, and it [the JCPOA] also gave Iran too much money, which they used to support terrorism,” said Lieberman. “I am afraid now, for reasons that make no sense, the Biden administration has reentered negotiations with Iran and wants too much to have a deal.”

According to Lieberman, the agreement being discussed in Vienna is a “bad deal,” that like its predecessor, will not end the Iranian nuclear program but supply money that the ayatollahs will use to support terrorism.

“We even hear that the new agreement may include some lifting of sanctions on the Islamic Revolutionary Guard Corps [IRGC], which is a terrorist group that has been responsible for killing Americans, Israeli and Arabs in the Middle East and throughout the world,” he said.

The irony, he noted, is that the new deal has been paused due to a last-minute Russian demand that Washington pledge not to impose sanctions on any trade between Moscow and Tehran when an agreement is signed.

“I think this has finally crossed a red line for the Biden administration and the European powers that are around the table,” said Lieberman, though he added that he is not optimistic it will stop the deal. “I think somehow they will find a way to work it out, and give Iran and Russia, one more time, much more than they deserve in return for no real increase in security for the rest of the world.”

On the question of whether economic sanctions by the United States and other members of the North Atlantic Treaty Organization (NATO) will ultimately stop Russia’s attacks against Ukraine, the former senator said that historically, “military power prevails when there is a leader like Putin.”

He condemned the alliance of 30 nations for refusing to impose a no-fly zone over Ukraine to limit “inhumane” attacks by Russian warplanes on innocent Ukrainian civilians, and he rejected the notion that such a move would drag the alliance directly into Moscow’s war and potentially lead to World War III.

“In my opinion, if you don’t take action because of fear of what your enemies will do, this creates incentives for other countries, like Iran, China and North Korea to take aggressive actions, like Russia did,” he said.

“Less than 100 years ago, Hitler was saying things people thought were so outrageous that he would never do them, but he did them,” stressed Lieberman.

“When people say the kinds of things that Iran is saying, such as that they want to destroy Israel and America is next—or that they want to control the Arab world—we have to take them seriously, and realize how dangerous that would be for all of us.”