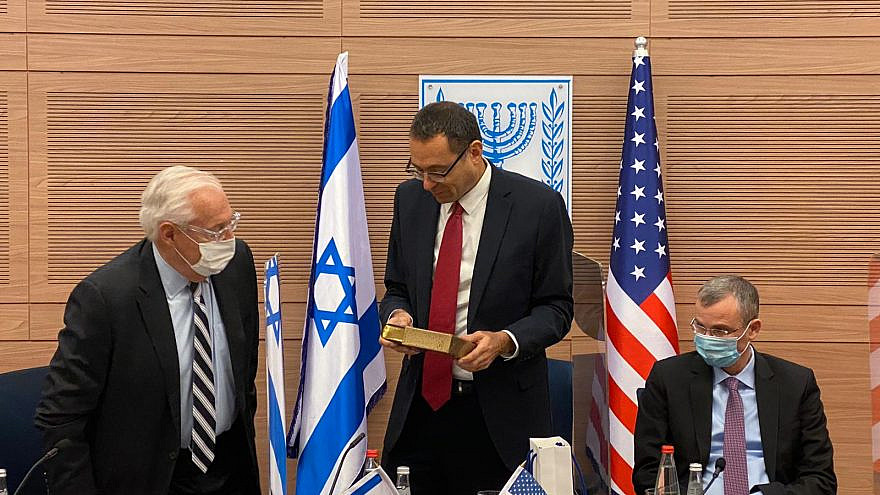 (January 11, 2021 / JNS) The Knesset honored departing U.S. Ambassador to Israel David Friedman on Monday as he is set to finish his term next week.

Zvi Hauser, chairman of the Knesset’s Foreign Affairs and Defense Committee, thanked Friedman for his “extraordinary contribution to strengthening the ties between the United States and the State of Israel.”

Hauser said Friedman was given the task of “fulfilling the dreams of all of us, changing historical distortions, and actually realizing the traditional position of the United States and its historical vision that the capital of the Jewish people in the Land of Israel is Jerusalem.”

Knesset Speaker Yariv Levin also thanked the outgoing envoy and noted his contributions, including increased security coordination, recognition of Jerusalem as the capital of Israel, relocation of the U.S. embassy to Jerusalem and recognition of Israeli sovereignty in the Golan Heights.

Friedman thanked the Knesset committee, saying his three-and-a-half years in Jerusalem “flew by like a flash”—a testament “to how exciting, riveting and enjoyable the job was.”

The departing envoy also noted how the U.S. recognition of Jerusalem as Israel’s capital in December 2017 led to major shifts in the Middle East.

“Everyone feared that the recognition of Jerusalem would lead to an explosion, but it turned out to be an explosion of peace and not of violence,” he said, referring to the Abraham Accords that have led to the normalization of ties between Israel and several Gulf states.

Friedman, who had previously served as Donald Trump’s bankruptcy lawyer before becoming ambassador, recently told The New York Times in an interview that he was “elated” on how things worked out with the accords, despite Israel having to suspend plans to apply sovereignty over parts of Judea and Samaria.