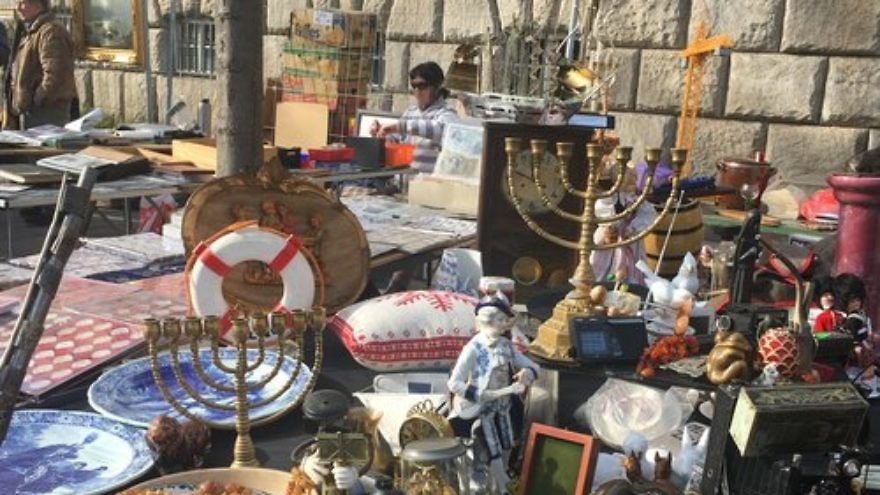 At an antiques flea market in Berlin, one of several stands proudly displays two Hanukkah menorahs for sale. The husky, white-haired seller, who wears a Soviet hammer-and-sickle pin for show, explains how one of them probably came from Königsberg, a former German city in modern Russia. The other is easy to identify: a plaque indicates it was gifted by an Israeli organization to a German-Jewish benefactor in 1992.

Next door, piles of old German photo albums are also for sale. Two albums, chosen at random, show happy, growing German families. One features a promoted German soldier proudly posing in uniform in 1941. In the other, pictures from the Nazi era have been mysteriously removed, leaving glue marks.

Old-fashioned typewriters, Dresden porcelain, silverware, goblets, and books from the 1930s—including a volume on German submarines written in Nazi-preferred font—are among the other objects on display. But who were the original owners? Most vendors can’t say for sure, but chances are, some of the antiques belonged to Nazi-era Germans—and Jews.

While Jewish victims and their organizational representatives have, over the years, processed claims for real estate, businesses and works of art seized by the Nazis, Jews’ more mundane Holocaust-era property may still be circulating in antique shops and households, unbeknownst to the current buyers or owners.

“How do you establish what ordinary household goods belonged to a family that was murdered?” asks Dr. Christoph Kreutzmüller, a curator at Berlin’s Jewish Museum and author of the 2015 book “Final Sale in Berlin,” which details the systematic theft of Jewish businesses in Berlin. Kreutzmüller’s book covers the often-overlooked subject of “Aryanization”—the forced transfer of Jewish property to “Aryans,” the Nazi supremacist term referring to ethnic Germans.

“This was something that happened right in the middle of society, and it touches the core of society,” Kreutzmüller tells JNS.org. “Property is central to all Western societies, and the Nazis excluded one group from property rights.”

Prior to deportation, Jews were required to detail their household inventory, which ended up in the hands of the Nazi government. Jews who emigrated either left goods behind or, in some cases, planned to ship them to their next destination, usually never to retrieve them. At the outbreak of World War Two, shipments docked in the port city of Hamburg, for instance, were confiscated by the Nazi government—and their contents were sold at a bargain price to German citizens.

Films like “Woman in Gold” (starring Helen Mirren), which told the story of a Jewish woman’s quest to retrieve her family’s Gustav Klimt portrait from the Austrian government, have popularized the subject of Nazi-looted art. But mundane objects from the Holocaust era have received little attention in popular culture, says Sharon Adler, director of Zurückgeben, a German foundation providing grants for female Jewish artists and scientists. Fittingly, the foundation’s name means “giving back” in German.

“Is there any public attention regarding things like porcelain, cutlery, beddings, toys, books and so on? I believe there is not, and I find this extremely important—because public opinion goes to the cliché that every Jew is a rich Jew and has a Klimt or Picasso at home,” says Adler, who believes that families possessing looted everyday objects should actually keep them in their homes to encourage thoughtful discourse on how they were stolen, directly or indirectly, from their original owners.

Henning Kahmann, a Berlin-based lawyer specializing in art restitution, continues to assist Holocaust survivors’ heirs in tracking down artwork. Unlike the case for everyday items, a restitution model for fine art exists because paintings and sculptures are identifiable and have the monetary or sentimental value to justify comprehensive efforts to secure their return.

“If your grandmother or so lost a nice table or silverware in Germany, there is hardly any possibility for a legal claim,” Kahmann says. “Typically, any claims would end where the current owner or current possessor invokes the statute of limitations after the passage of 30 years.”

While the statute of limitations has long passed for “Aryanized” property in Germany, international auction houses such as Sotheby’s and Christie’s employ researchers to determine the provenance of artworks for financial, moral and political considerations.

According to Wesley Fisher, director of research at the Conference on Jewish Material Claims Against Germany, West Germany set aside modest funds as compensation for lost household items when it began providing war reparations in the 1950s. But by then, everyday objects were not worth the search—if they could even be found.

For the most part, Fisher says, “what you see at flea markets may very well have been taken from the home of a murdered Nazi victim, but there is no way to trace the items. They remain the ‘little ghosts’ that are with us.”