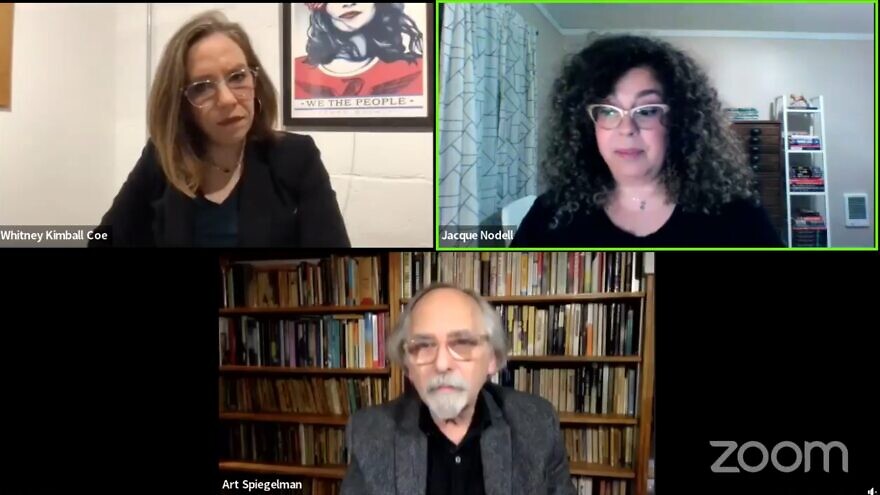 (February 8, 2022 / JNS) Yet again, those who wanted to learn about Maus had to leapfrog obstacles.

More than 10,000 viewers flooded into an online discussion with Pulitzer Prize-winning author Art Spiegelman on Monday to hear him speak about last month’s removal of his iconic Holocaust graphic novel Maus from a Tennessee school board’s curriculum. The public response to the Zoom session, hosted by the Jewish Federation of Greater Chattanooga, was greater than the number of user licenses available, forcing a virtual overthrow crowd onto the Federation’s Facebook page to view a live stream of the event.

“We are thrilled so many are interested and want to hear about this from the local perspective. Art sees this as local issue,” Michael Dzik, executive director of the Chattanooga federation, told JNS.

Maus, completed in 1991, depicts Spiegelman interviewing his father about his experiences as a Polish Jew and Holocaust survivor and the genocide’s aftermath on their family. Depicting Jews as mice and Germans as predatory cats, Maus is the only graphic novel to have won a Pulitzer Prize.

On Monday, Spiegelman blamed a changing political climate and a desire by some to paint over America’s flaws at the expense of teaching history accurately.

“I’m distressed to find that’s changed in the midst of strong political headwinds that are burning books, literally,” he said of the board’s sudden change of heart on Maus, which had long been part of the local curriculum, coupled with last week’s literal burning of other books, including those from the Harry Potter and Twilight series, led by a controversial Tennessee pastor. “They are trying to readjust our curricula to terrify librarians, book readers and teachers.” 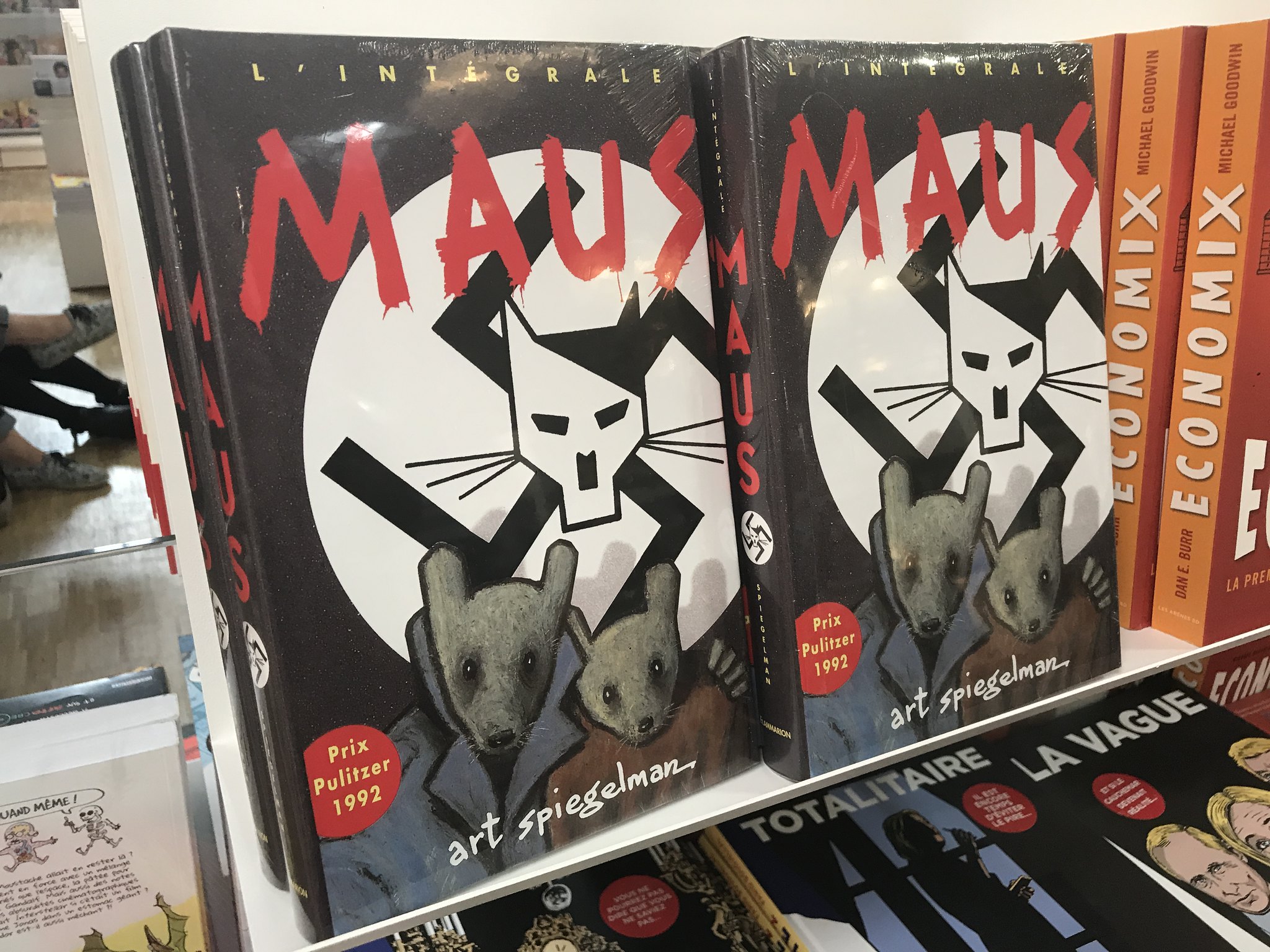 A display of the book “Maus” by Art Spiegelman. Source: Flickr/ActuaLitté.

“Even if they say they’re willing to teach the Holocaust, they want a fuzzier, warmer, gentler Holocaust that shows how great the Americans were,” he said, deriding some recent attempts to give parents more power to monitor teachers and the material they present. Teachers “have to watch your words so you don’t offend somebody who might be unhappy about their grandfather being a Klansman, who might be unhappy and embarrassed about some of the things America has done in its history,” said Spiegelman.

Truth be told, Spiegelman said he initially agreed with the McGinn County School Board’s decision, lamenting that his memoir is often utilized as an “Auschwitz for beginners” in middle schools.

“Hey board, I’m with you: We shouldn’t be teaching this to young kids,” Spiegelman said on Monday, describing his first thoughts on the matter, believing it might be best that Maus not be explored until college.

But once Spiegelman pored over the decision by the school board—a decision that sparked a national debate over the Holocaust, anti-Semitism, parental control and more—he found their reasoning “deeply troubling.”

‘What’s going on now is about controlling’

He addressed the school board’s focus on select elements of Maus, including Spiegelman’s disrespectful language towards his parents, illustrations of dead Jews as mice, the depiction of Spiegelman’s mother committing suicide while naked and other “unhealthy” content. The board voted unanimously to remove Maus from its curriculum. Spiegelman said those personal elements were crucial in telling his family’s story in a believable way.”

“I think this is all about parents wanting to control their kids in the guise of protecting them,” he said. “It’s certainly about Jews, but it’s not just about Jews. It’s about ‘othering,’ and what’s going on now is about controlling—controlling what kids can look at, what kids can read, what kids can see—in a way that makes them less able to think, not more, and it takes the form of the criticisms from this board where they say, ‘He shouldn’t be talking to his parents like that.’ ”

Spiegelman attempted to foreshadow the consequences of the trend lines that lead to the banning of his book.

“The danger is that if you don’t know what happened and don’t pick up from it, it’s not that history repeats itself exactly; it’s just you have to be instructed by what happens in the past to protect yourself,” he said. “After there’s been a genocide on the scale of the Holocaust, it’s now out of the bag. This can be done. This could even be inspiring for some horrible, monstrous politician. … They want a fuzzier, warmer, more gentle Holocaust that shows how great the Americans were when coming in to liberate,” he said, referencing the stated desire of one school-board member to teach the Holocaust in a way that reflected honorably on the United States.

Spiegelman noted on Monday that it was the Russians who liberated Auschwitz, where his father was held, with the U.S. initially displaying reluctance to join the war.

The discussion was moderated by a Jewish local comics historian and the director of a rural policy group, who then turned it over to a local reverend to pose student-submitted questions to Spiegelman. The event was co-sponsored by Chattanooga-based Reform and Conservative Jewish congregations, Ascension Lutheran Church of Chattanooga and a political advocacy site that broke the story of the book-banning.

“There is a larger culture to be touched on in this discussion beyond Jewish community—from the educational perspective, age-appropriateness and other topics,” said Dzik, who described Chattanooga’s 1,500-strong Jewish population as “very united, very connected. They do a lot together.”

Spiegelman, relaxed throughout much of the evening, took wry note of the uptick in sales of Maus in the wake of the school-board decision, coupled with TV personality Whoopi Goldberg’s recent controversial take on the Holocaust and racism on ABC’s morning talk show “The View,” for which she was suspended for two weeks And which caused a viral storm of reactions from the Jewish community and more.

Anti-Semitism, quipped the author, has ironically been “good for business.