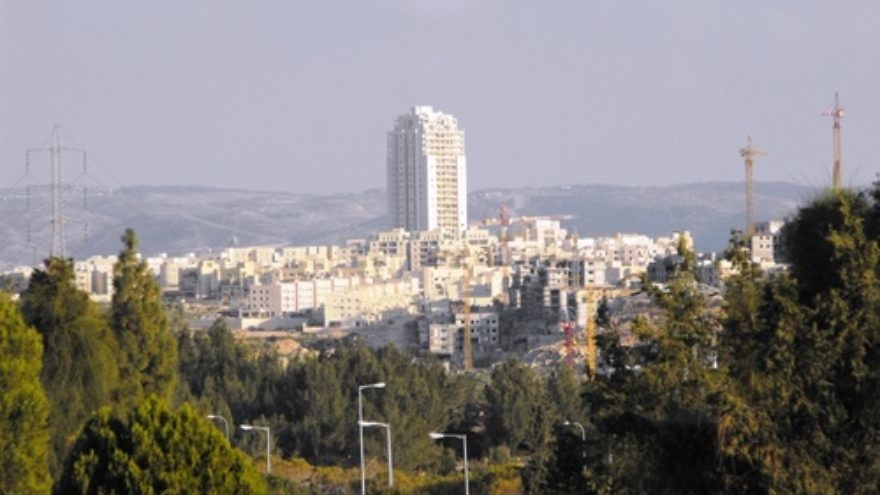 (September 15, 2013 / JNS) Modi’in is a town mentioned in the Mishnah that was home to the Maccabees of Hanukkah fame, and where the oldest synagogue in Israel was discovered, but it is also the Jewish state’s largest planned community and bills itself as “The City of the Future.”

Reconciling those two images of Modi’in is at the heart of a struggle that is playing itself out on the local, national, and international level, as archeologists and preservationists try to raise awareness of Modi’in’s rich Hanukkah-related history and preserve ancient sites, while most city and government officials prefer to focus resources on development of services for today’s residents.

In 1993, Prime Minister Yitzhak Rabin laid the cornerstone for Modi’in on a rocky hillside in the center of the country on an ancient crossroads between the coastal ports and the hills of Judea and Samaria.

The idea was to develop a large city in the center of the country—equidistant from Jerusalem and Tel Aviv, to spread the population and take advantage of the limited amount of land available for development. Today, Modi’in is a diverse and successful city of more than 85,000 people, spread over 10 neighborhoods built on wadis and hilltops. The city features an extensive park system and a high level of cultural, commercial, and sports facilities.

Amongst the first people to arrive in modern-day Modi’in in 1996 was Marion Stone, an immigrant from the U.K. who had been living in the Galilee development town of Carmiel since 1979. “I moved in two days before Hanukkah,” recalls Stone. She was appalled to learn that bulldozers were then already working on the Titora Hill, where evidence of First Temple-era settlement was found along with a complex of cisterns, mikvaot (ritual baths), tunnels, and dovecotes. Some experts believe the area may have been used as a hideout during the Bar Kochba revolt.

Stone immediately joined the Society for Preservation of Sites and Landscape in Modi’in that undertook legal action to prevent destruction of the hill. The society’s efforts were only partially successful, as ultimately part of Modi’in was built on portions of the Titora, covering many of the ancient artifacts. Finally, last spring, a court ruling ordered developers to find an alternative site for construction of an additional 750 apartments.

Stone and Leiah Elbaum—another early resident of Modi’in, who has a background in Land of Israel studies and has conducted extensive research into her hometown—agree that elected officials in Modi’in have neglected to capitalize on the rich Maccabean heritage of the area.

Elbaum and Stone cite Titora, as well as the extraordinary find of the remains of the Umm el-Umdan (Mother of Pillars in Arabic) synagogue built in the Hasmonean period, which boasts a roof supported by eight pillars that was constructed in the time of Herod. The structure, located near the Buchman neighborhood on the Modi’in-Latrun road, closely resembles other renowned Second Temple-period synagogues, such as those at Masada, Herodium, and Gamla, that have all become major tourism sites.

“There’s never been a proper archeological survey done of this area,” Elbaum asserts. “We have places here that could raise the profile of Modi’in and enhance the connection of the people to the land, but it’s not a priority for local officials,” she says.

“Part of what attracted me to live here was the idea of building a new Jewish community where an ancient one had existed so many years ago,” she adds, noting with disappointment that no neighborhood or school in Modi’in is named after an important Hasmonean-era figure.

Stone says one of her most profound experiences took place at the Umm el-Umdan synagogue during Hanukkah in 2002, shortly after it was discovered. Students from the nearby Nitzanim School held a torchlight march to the synagogue and lit a Hanukkah menorah there. “It was momentous,” Stone remembers. “I was in tears. There was singing and speeches. It was the day after the terror attack against Israelis in Mombassa.”

The hanukkiah lighting ceremony at the ancient synagogue went on for a number of years after that, until the event grew too large and there was concern over damage to the site.  In recent years, nearby residents have been marking Shabbat Hanukkah by coming to pray at Umm el-Umdan.

Modi’in resident Howie Mischel wrote of the impact of last year’s Hanukkah’s gathering: “The men stood in the central part of the site, in a rectangular area that was probably the main floor of the beit knesset. In front of me was a small indentation in the stone framework surrounding the floor, perfectly positioned to accommodate an ark to hold Torah scrolls. As I looked past it, I realized that it was perfectly oriented on this hill to face Jerusalem.”

“It was not lost on any of us that this site has remained unmarked, undeveloped and virtually ignored by both municipal officials and our national government. How could we have been standing on this incredibly meaningful site, in the town where the Maccabees’ efforts assured Jewish continuity, and be in the dark? How could this archaeological site be so ignored and treated almost as a nuisance by the municipal government, without— aside from the weeds being plucked—a shekel having been invested in site preservation?”

According to a spokesman for the Prime Minister’s office, the Umm el-Umdan compound was approved for inclusion in the Prime Minister’s Cultural Heritage Program that designates funding for heritage sites across the country. With a projected total budget of 2.1 million shekels, half from the government and half to be raised from outside sources, the spokesman told JNS.org that renovation of the pathways has been completed; preservation of the synagogue itself, the residential quarters of the Hasmonean village, and artifacts is almost finished, and restoration of the synagogue interior is underway. A protective pergola will be in place in coming months, and the final phase is to include an on-site visitor center.

Alex Weinreb, 55, was one of those who stood in front of the tractors at Umm el-Umdan during Hanukkah 2001 to prevent the destruction of the synagogue. His concern led him to run for office, and the New York native subsequently served as deputy mayor of Modi’in between 2003-2010.

Weinreb, who has an advanced degree in archeology, has long been in the forefront of efforts to put Modi’in’s history on the map. One initiative he pushed through is the annual Hanukkah and Modi’in Heritage Conference, which brings together scholars, archeologists, and community members to study aspects of the area’s history. Weinreb also initiated the approach to the Prime Minister’s Cultural Heritage Program.

In 2010, Weinreb and a team of architects, designers and museum specialists put together a sophisticated proposal to create a Hasmonean Educational and Tourist Visitors Center for the promotion of the Maccabean heritage in Modiin on the site of the synagogue dating to the Maccabee period. They’re still seeking donors and government support to jumpstart the project.

Meanwhile, some local families mark Hanukkah by taking an outing to the “Maccabean Graves” just outside Modi’in. They take the kids and a hanukkiah; set up camp on the rocks surrounding the caves in the national park; light the hanukkiah; sing the traditional Hanukkah songs; and even take a primus stove and fry up latkes.

Despite the official sign at the entrance, contemporary archeologists believe the site just outside Modi’in is of Byzantine origin. The true location of the grave of the Maccabees continues to be the subject of speculation, and, like many other parts of history in Modi’in, is awaiting funds for methodical research.