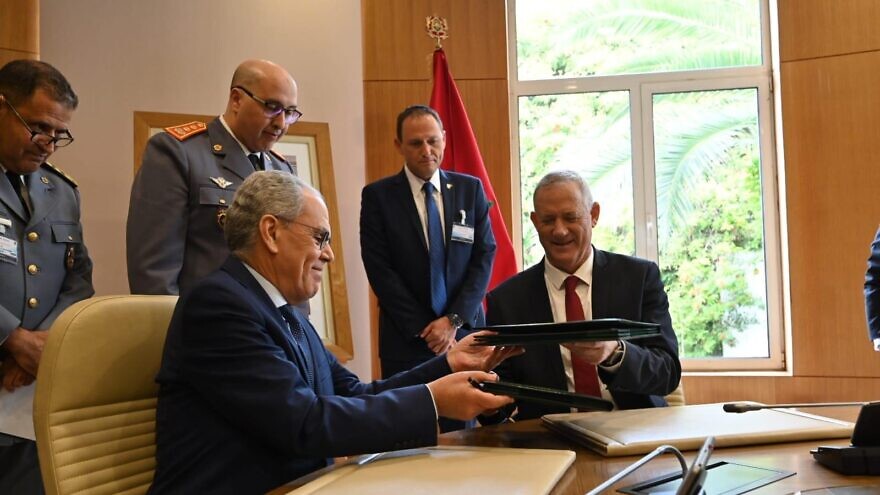 (December 27, 2022 / JNS) Relations between Morocco and Israel are booming.

Just this month, the countries signed a natural gas exploration deal and are working on a “Cyber Iron Dome” to protect computer systems and networks. In Oct. 2022, bilateral trade totaled $12.3 million, up 925% from Oct. 2021. Israel is building a permanent embassy building in Rabat and is set to open a separate trade mission in 2023.

Morocco, Israel and the United States signed a joint declaration in Rabat on Dec. 22, 2020 announcing the opening of a “new era in the relations between the Kingdom of Morocco and the State of Israel.” Twelve days earlier, President Donald Trump had announced that the U.S. had brokered a deal between the two Mediterranean countries, and that the United States had recognized Moroccan sovereignty over the Western Sahara.

Morocco attended the first Negev Summit in Israel along with the U.S., UAE, Bahrain and Egypt, and is to host the Negev 2 Summit in Dakhla in the Western Sahara early next year.

Avi Melamed, a former Israeli intelligence official and the author of Inside The Middle East: Entering A New Era, told JNS that “given Morocco’s location, normalization with Rabat increases and deepens the potential for cooperation between Israel and countries in West Africa.”

“Indeed, in 2021 Morocco supported Israel rejoining the African Union as an observer. For Israel, gaining observer status in the African Union was a political victory and reflected the improvement of its status on the continent,” he said.

Two years on, Morocco and Israel have accumulated several key wins in their relationship.

Israel Aerospace Industries and Morocco signed a memorandum of understanding in the aeronautics sector earlier this year.

Sharon Biton, vice president for the MENA region at IAI, told JNS, “Our cooperation with Morocco involves transfer of technology and knowledge to enable Morocco to have its own aerospace ecosystem, which we are very proud of. We are currently working with our partners to establish aeronautics factories in Morocco.”

IAI also signed a memorandum of understanding with the International University of Rabat (UIR) to boost cooperation in scientific research and innovation.

According to Biton, “UIR has expressed interest in various things, including electro-optics. We are looking into more ways to partner with Morocco, including through its universities because while they are not our main clients, we see the opportunity in working together to benefit the next generation. As an Israeli of Moroccan descent, I would love to see Moroccan engineers working shoulder-to-shoulder with Israelis at IAI in mutual development. One way to realize that dream is through cooperation with Moroccan universities.”

Lastly, the police forces of Morocco and Israel have increased cooperation. For example, they have agreed to cooperate in investigating instances where Israeli criminals flee to Morocco.

Aviva Steinberger, director of Innovation Diplomacy at Start-Up Nation Central (SNC), a nonprofit organization that connects Israeli innovation to the world, told JNS that “Israel seeks to leverage its innovation ecosystem and Morocco’s role as a major regional player in North and West Africa to expand the impact of technological solutions in that region, especially in the water, energy, agriculture and food sectors.”

In May, SNC co-organized the three-day “Morocco-Israel Connect to Innovate” conference in Casablanca that brought together 250 business leaders from the two countries and focused on ways to collaborate in the agrifood-tech, water-tech, energy, logistics and human capital sectors.

SNC was integral in brokering this deal, Steinberger told JNS.

“Morocco is interested in the experience of Israel’s ecosystem-building journey, and this water tech cooperation is one prime example since water security is a major concern in Morocco’s urban centers and periphery. The country has been experiencing the worst drought it’s seen in decades, with cities like Marrakesh needing to close their taps for significant portions of the day. Collaboration with Israel can directly impact the citizens of Morocco,” she said.

Israel’s Volcani Center and the Moroccan National Institute of Agronomy agreed to cooperate in smart and green agriculture as well as the genetic improvement of wheat.

Israeli company Mehadrin Tnuport Export announced that it will grow avocados in Morocco.

Israel has the potential to assist the North African country in developing its human capital, Steinberger told JNS. “While Morocco is investing in strong technology programs in its universities, a lot of junior to mid-level tech talent is leaving Morocco in a brain drain. Cooperation with Israel creates local opportunities in Morocco that will help reverse this trend.”

Israir and El Al started Tel Aviv to Marrakech direct flight routes, and Israir signed an agreement with Morocco to promote tourism to the country. Royal Air Maroc started flights from Casablanca to Tel Aviv. The countries also signed an agreement to increase innovation and maintenance in the civilian aerospace industry.

This year, Jerusalem and Rabat signed a trade deal and an MOU on intellectual property.

Israel signed an MOU for the construction of several hospitals in Morocco at an estimated cost of $497 million. Israel has agreed to bring Moroccan nurses and construction workers to work in Israel.

He plans to restore “hundreds” of Jewish heritage sites in the country; since that declaration, Morocco has already restored the 10-acre ancient Jewish cemetery at Meknes.

Morocco also opened its House of Memory museum in Essaouira to commemorate the historical coexistence of the city’s Muslims and Jews.

The International University of Rabat and Ben-Gurion University of the Negev signed an MOU to collectively study Moroccan Jewry and the interaction between Jews and Muslims in the Middle East and North Africa.

Lastly, Morocco inaugurated the first synagogue at a university in the Arab world, at Mohammed VI Polytechnic University near Marrakech.