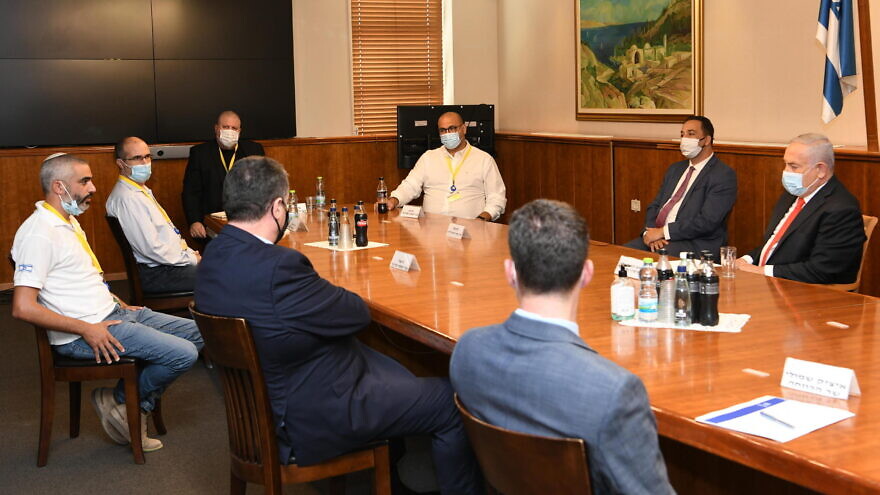 (September 7, 2020 / JNS) Israeli Prime Minister Benjamin Netanyahu announced on Sunday that ahead of Rosh Hashanah the government will triple to NIS 18 million ($5.3 million) financial support for food banks and hunger-relief organizations. A budget of NIS 9 million ($2.6 million) will also be allocated for food parcels for the holiday, he said.

“We are investing almost NIS 1 billion [$296 million] in immediate assistance for sectors in distress; we want it to reach them and reach them quickly,” said Netanyahu.

The prime minister said that the three-fold increase was intended to demonstrate the government’s commitment to those in need.

Unemployment has soared in Israel since the outbreak of the COVID-19 in March, with the Bank of Israel reporting that as of April 21, 2020, the number of job seekers (which are sometimes labeled “unemployed”) had crossed 1 million people, accounting for more than 27 percent of the labor force.

According to data released by Israel’s Central Bureau of Statistics in July, 55 percent of Israelis age 21 and over reported fearing difficulty in meeting monthly expenses, up from 46 percent in the previous survey. The figure was significantly higher in the country’s Arab sector at 65 percent. Forty-one percent of Jewish Israelis and 49 percent of Arab Israelis surveyed reported a worsening of their financial situation and that of their families as a result of the coronavirus crisis.

Some 21 percent—about 1.2 million people—reported that they or a member of their household had reduced the quantity of food or number of meals that they ate over the past week; 33 percent among Arabs, according to the report. This figure (21 percent) is higher than that observed in the previous survey—14 percent.

The $7 billion relief plan—first presented by Netanyahu and Finance Minister Israel Katz on July 9, includes the extension of unemployment benefits until June 2021 or until unemployment falls below 10 percent, and the payment stipends of up to NIS 4,000 per month ($1,163) to those aged 67 and over until December 2020.

While calling the plan “comprehensive” and “unprecedented,” Netanyahu acknowledged that there were “holes in the net” that needed to be addressed.

“I know that it is not complete; I also know that there are holes in it. The finance minister and I have already spoken, and I intend to speak about this also with [Defense Minister] Benny Gantz in order to provide a response to the holes in the net,” he said. “There are many things that need to be dealt with, including help for families, sectors and other things. We will deal with all of these.”