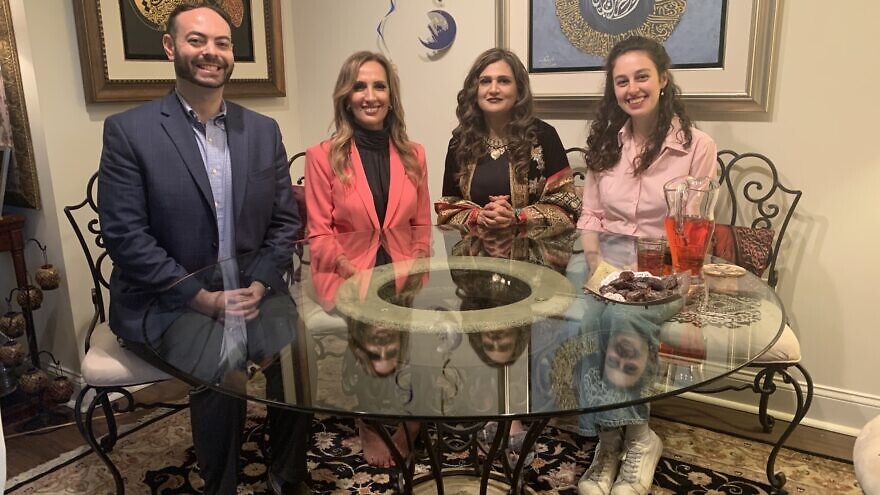 (April 12, 2022 / JNS) The Abraham Accords have led to a host of programs to bring together Jews and Muslims. One new project, the Mukhayriq Initiative, is named after a Jewish rabbi who gave his life fighting to defend the Prophet Muhammad at the legendary Battle of Uhud in 625 C.E. The story of the rabbi’s sacrifice—and his close friendship with Muhammed—is known mainly to Islamic scholars, but the founders of the initiative say it reflects a positive, if suppressed, aspect of Muslim-Jewish history. To underscore the importance of the story, coming as it does at Islam’s start, the co-founders picked the anniversary of the battle, March 23, to announce their new initiative.

“The main goal is to celebrate a shared history of Jews and Muslims living together, in certain countries for millennia, as neighbors, as business associates and as friends. Secondly, we want to build unity between Muslims and Jews around the world,” Ellie Cohanim, former U.S. Deputy Special Envoy to Monitor and Combat Anti-Semitism, as well as one of the Mukhayriq Initiative co-founders, told JNS.

Cohanim said previous efforts to bring Muslims and Jews together have had only tepid success, or in some cases failed altogether as the people behind them were found to have connections to radical organizations. What sets this initiative apart is that it brings Jews from the MENA region (Middle East and North Africa) into the project. “Surprisingly enough, Mizrachi and Sephardi Jews have been excluded from a lot of these efforts in the Jewish community in the past,” she said.

The timing of the initiative couldn’t be better, said Cohanim, noting that there is a new openness among Muslims in the MENA region to rediscover the “indigenous Jewish communities that existed in the region for thousands of years.” She said Muslims want to learn more about that history and even “to reach out to those former neighbors.” She noted that among Jews, there is also a “real excitement” to learn more about Islam and Muslim communities, not just in the MENA region but around the world.

The initiative’s first major project is an accelerator program, in which applicants submit project ideas that would bring Muslims and Jews together. Those selected will receive part of a $50,000 funding pool and work with board members to see their idea brought to fruition. A maximum of 20 applicants will be accepted.

“The accelerator is designed to hopefully attract the next generation of leadership. We’re open to any ideas that will succeed in bringing Muslims and Jews together, whether it will be in local communities or on a global scale,” said Cohanim. “Rather than us try to dictate to others how we can advance this relationship, we want the community to tell us what’s needed.”

‘We are all the descendants of Ibrahim [Abraham]’

Anila Ali, board chair and president of the American Muslim and Multifaith Women’s Empowerment Council, who helped found the Mukhayriq Initiative, said she wanted to be a part of the project the moment she heard the story of Mukhayriq. “When they reached out to me, I quickly Googled it and I said, ‘Oh, my God, I can’t believe I didn’t know this. What a beautiful story,” she told JNS.

Ali, a longtime advocate of improved Muslim-Jewish relations, has in the past worked with groups like the Combat Antisemitism Movement and the Anti-Defamation League. “I feel like the Jews are our natural allies,” she said.

A native of Pakistan, her upbringing comes as a surprise to those exposed only to accounts of intolerance in today’s Pakistan. She said her parents taught her tolerance and respect for other religions—that “we are all the descendants of Ibrahim [Abraham].” Women didn’t wear hijabs and men didn’t grow beards when she grew up. Her grandmother was even a women’s rights leader in India. “There were cultural restraints on me, but they were mostly not religious,” she noted.

She said things began to change around the time of the Russian invasion of Afghanistan in 1979. “I saw it as it happened. There was a shift to the far-right,” she said, noting that parts of the Koran were ignored or misrepresented as Muslim leaders decided that “the best way to control people is to oppress them.”

Despite the violence and radicalization among some Muslims, Ali remains optimistic. She said she used to see much more anti-Semitism among American Muslims. Speaking of educated Muslims in America, she said “they now won’t work with organizations that hate Jews—that are anti-Semitic. They say, ‘We like Jews. We work with them. They are our colleagues, our neighbors, our kids play with their kids.’ I didn’t hear that conversation 15 years ago.”

Cohanim added that “we know for a fact that the radicals and the extremists are small in number. But unfortunately, they’re loud and significant in impact. What we hope to do with the Muhayriq Initiative is to flip that phenomenon and make it so that the millions of peace-seeking Muslims and Jews will have the greater voice and greater impact.”

She doesn’t underestimate the challenge and said the initiative in no way attempts to whitewash the often painful history of oppression Jews suffered at the hands of Muslims “in different countries and in different eras.” She noted that she felt that persecution firsthand when she was forced to flee Iran as a young girl with her family during the Iranian Revolution. “That’s an experience that’s with me every day of my life,” she said. “I’ll never forget what was stolen from me, what was taken away from me by that radical regime.”

“At the same time, I would tell you that there were also periods that were very good for Jews in Muslim countries,” she added. “We want to celebrate all the positives that did take place.”