The term “blacklist” is one that brings up memories of McCarthysim to most Americans. But those on a new Israeli “blacklist” who are to be blocked from entry to that country for promoting boycotts are undeserving of any sympathy.

The 20 listed groups—singled out for their support of the Boycott, Divestment and Sanctions (BDS) movement—are a collection of vile hatemongers working not merely to cripple Israel’s economy, but to isolate it and to treat its people as pariahs who deserve to be attacked by terrorists. So it’s reasonable that the Jewish state should decide that it would no longer allow people intent on doing its citizens harm to do so within its borders. 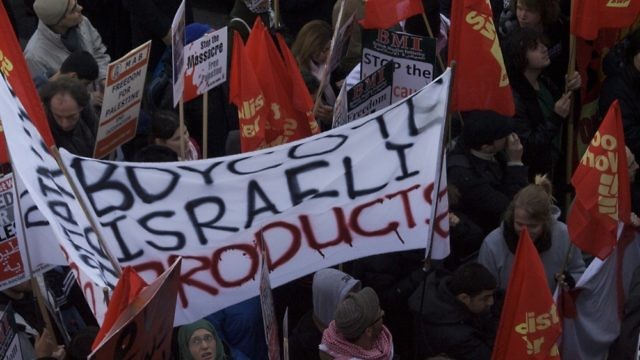 A protest in London calling for a boycott of Israel. Credit: Claudia Gabriela Marques Vieira via Wikimedia Commons.

That’s what many defenders of Israel have been saying and they’re not wrong to make those points. No sovereign country is obligated to let those working for its destruction to cross its borders freely. Nations like the U.S. have been enforcing such restrictions, such as a ban on known Communists or supporters of Islamist terror, long before President Donald Trump came along.

But just because Israel’s new regulation is defensible doesn’t mean it is smart. Far from hurting the BDS movement, the measure is the best thing that could have happened to these enemies of the Jewish state. The 20 on the blacklist, and in particular, Jewish Voice for Peace (JVP)—the sole member of this anti-Israel alliance that claims to be Jewish—have gotten more publicity out of this move than anything they could have done on their own.

More importantly, the focus on their entering Israel misrepresents the real danger of BDS. Contrary to the fears of Israeli lawmakers, the real threat is to Jews in the Diaspora, not those in the Jewish state.

While BDS is an annoyance to Israel, it has done little damage to the nation’s prosperous economy. Outside of publicity stunts involving artists choosing not to play in Israel—often while also appearing in nations with real human rights abuses—the movement can claim few successes. And for every Lorde or Roger Waters who backs BDS, there are others like Jerry Seinfeld, Chris Rock or Ringo Starr, who come to the Jewish state and more than make up for them.

The real danger from BDS comes from the way anti-Israel groups operating on college campuses in the U.S. and elsewhere promote and practice anti-Semitism. They seek to not merely intimidate Jewish and other pro-Israel students from speaking out, but also to effectively make it difficult to openly live as Jews.

BDS supporters are not really interested in changing Israeli policies. Their goal is the elimination of Israel. That is made clear by JVP, which explicitly endorses the so-called “right of return” that would mean the end of the Jewish state as well as openly anti-Semitic charges. In its efforts to gain African-American backing, it has sought to blame Jews who support programs that bring American law enforcement personnel to Israel for training for the killing of blacks by police, a new version of the old blood libel.

Though there is a distinction between BDS and those who wish to only boycott settlements, the latter effort is also reprehensible since it helps legitimize other more dangerous boycotts. Those who back that idea also fail to understand that Israel’s foes make no distinction between Tel Aviv and Jews living in the West Bank.

Keeping people out of Israel simply for expressing an opinion, however odious it might be, is a mistake since the boost it gives them far outweighs the cost of any mischief they might get up to once in the country. Allowing BDS supporters to play the martyr also gives another excuse for newspapers like The New York Times to treat JVP like a legitimate organization rather than a group of Jews giving cover to anti-Semitic hatemongers. It also gives them an opportunity to falsely smear Israel as a tyrannical state rather than the pluralistic democracy that it is.

The real answer to the libels spread by BDS groups is not a travel ban, but to tell the truth about Israeli democracy, the Palestinians’ consistent rejection of peace as well as the reasonable concerns Israelis have about creating another terrorist state bent on their destruction. Keeping out pro-BDS activists is a mere expression of resentment that, though it is understandable, hands them an undeserved victory. Far from helping the efforts of those in the Diaspora working to refute and isolate pro-BDS groups, especially via laws that point out that anti-Jewish commercial boycotts are illegal, the Israeli measure is a pointless blunder that impedes their efforts.

Jonathan S. Tobin is editor in chief of JNS.