(March 16, 2022 / JNS) For most people, when the images of Russian tanks approaching Ukraine’s border began to be broadcast around the world, it was something looked upon as news from a distant front—horrific, but very far away.

But for me, who lives in Ukraine, this was life, and it was all too real.

At first, most people around here said that it was just Russian President Vladimir Putin being Putin, and that he wouldn’t invade. I wasn’t at all sure and thought he very might well invade, so I made the decision to buy airline tickets for my family to escape to Israel. My wife and five children (ages 6 to 14) were able to get on the very last flight out of Ukraine destined for Israel.

I stayed behind because I knew my help would be needed. Together with the chief rabbi of Ukraine, we began to look for solutions to an escalating crisis. We were able to find a path for many Jews living in the larger cities to flee. We set up hotels along the border where the refugees would be able to stay. We bought food, medicine and basic supplies, and on that last night before the Russians invaded, we were able to evacuate dozens of people who never in their lives thought they would see such a shocking day.

When the sounds of bombing began at 4 a.m., we were already in the shelters. Over the course of the day, as people realized what we were facing, the roads became jam-packed with people trying to head west. Many people who wanted to escape weren’t able to find transportation. Many bus drivers simply were afraid to drive fearing they could be struck by the enemy at any time on the road.

Over the course of that first day, we desperately worked to help people into shelters. By Shabbat (a day later), we saw the Russian air force attacking and thought it was just a matter of time before our hideout would be hit by a rocket. Because of the immediate danger to our lives, we were permitted to drive on Shabbat; however, we had no idea which direction was the best to take or which roads might lead us directly into danger. We had to make sure that we weren’t driving towards a Russian army brigade or that we would get stuck in the middle of a battlefield. I can’t honestly tell you which roads we took, but by Motzei Shabbat (Saturday evening), we had reached the border crossing.

You need to understand that people are fleeing with literally nothing to their names. This is real war. They are running out of their homes after being told that there’s a bus to leave on, and they jump aboard without asking any questions. Where possible, they grab some clothing, critical documents and some money, and they just run.

At the border, they arrive completely exhausted; physically and emotionally. Every day, I meet hundreds of Jewish refugees, and I do whatever I can to help them and set them on their way. Shorashim has set up a hotline that helps anyone who wants to make aliyah and to assist them in getting the necessary documentation. We are working 24 hours a day, and the phones never stop ringing. War doesn’t care about the time of day or whether it’s light outside; no matter the hour we need to be available. 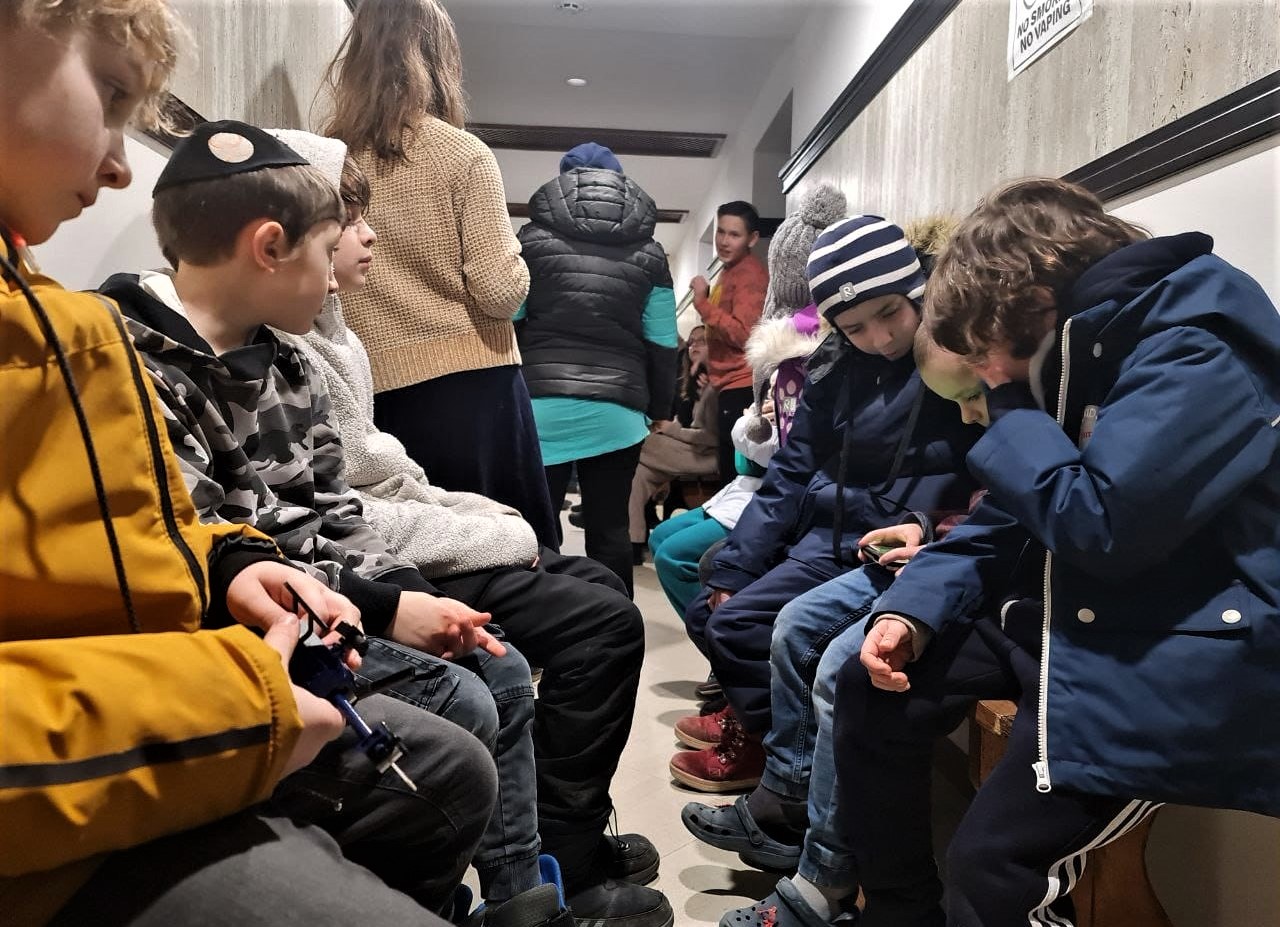 Jewish children huddle in a shelter during an attack by Russia, March 2022. Credit: Courtesy,

Within those masses of refugees are countless incredibly difficult stories. Many of those women and children you see on the news are leaving behind husbands and fathers who are fighting, and they truly don’t know if they will ever see them again.

One family that we have helped comes from the town of Irpin, close to Kyiv (Kiev). They lived for two weeks under almost constant attack from Chechen forces, who are known to be among the most brutal soldiers serving the Russian army. Miraculously, they were able to flee and are now in a far safer area—still in Ukrainian territory but along the Hungarian border. They are now thinking about their next steps with the likelihood that they will soon call Israel their new home. And we will be there to help them, and a growing number of families like them, to make that possible.

Despite the awful images and painful stories I’m seeing and hearing, I choose to be optimistic. I chose to think that if a war has a beginning, then it will also have an end. Our greatest prayer is that it will be here very, very soon.

Gershon Bloritzky works in Ukraine with Shorashim, a project of the Tzohar Rabbinical Organization that provides Jewish identification services for Israelis needing to prove their Jewish lineage. Click here to learn more.