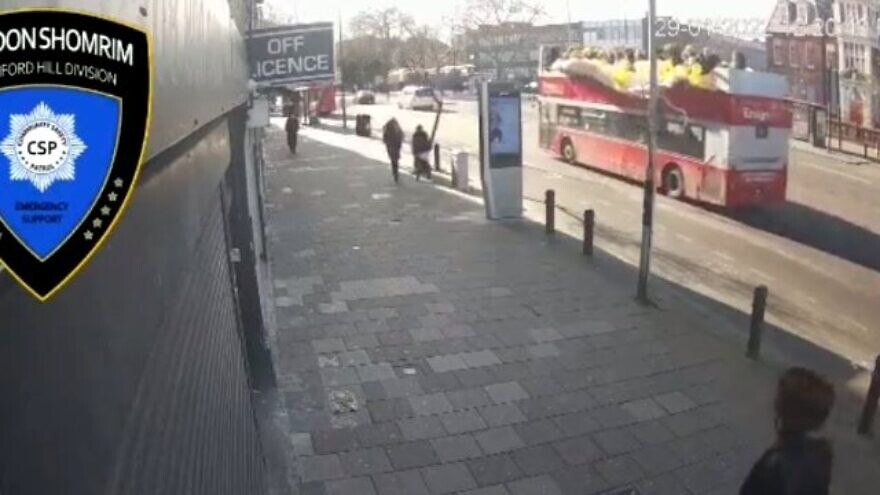 (January 31, 2022 / JNS) A bus company in London claims that it has no connection to anti-Semitic slurs that were reportedly shouted at Chassidic Jews walking in the Stamford Hill neighborhood on Shabbat. It was one in a series of incidents in recent days targeting area Jews.

According to a report by the local Jewish security group Shomrim of Stamford Hill, people on the double-decker Ensign Company bus—on surveillance seen adorned with yellow balloons—shouted, “Yiddos, go home.”

Diane Abbott, a member of the British Parliament in whose district the incident occurred, tweeted: “Shocking abuse and harassment of Orthodox Jews in Stamford Hill Hackney. Important that the perpetrators are swiftly brought to justice.”

On social media, the bus company explained that the vehicle had been charted by a private group, “what we understood to be a church group.”

They said, “We had absolutely no idea that this would happen or was planned, and we are now investigating the matter and will be speaking to the client. We are happy to assist the police with any investigation.”

Officials from Ensign Bus went on to say that “our driver, unfortunately, did not hear anything due to the general amount of noise from the number of people upstairs. If anyone has audio (or video with audio) of what was said, we would like to hear it to help with our own investigation.”

A spokesperson for Campaign Against Antisemitism told JNS, “That a bus could drive through one of London’s most heavily Jewish neighborhoods calling for the expulsion of its Jewish residents is utterly reprehensible. This is yet another addition to the growing litany of anti-Semitic incidents that we have seen on the streets of London in recent weeks. The bus company must investigate how this was allowed to happen, and the police must bring the culprits to justice.”

According to the Jewish monitoring organization, there are, on average, “three hate crimes direct at Jews every single day in England and Wales.” In the most recent study of hate crimes by the British government, some 1,288 hate crimes were committed against Jews in just one year.

The spokesperson told JNS that was not the only anti-Semitic incident in the Stamford Hill neighborhood of late. On Monday, members of a local gang known for harassing Jews spit in the face of a 5-year-old boy who was playing outside, while on Saturday evening a group of youths reportedly smashed windows in Jewish-owned homes. And just last week, two Jewish men were assaulted as they came out of their bakery; an 18-year-old was arrested and charged in that incident.