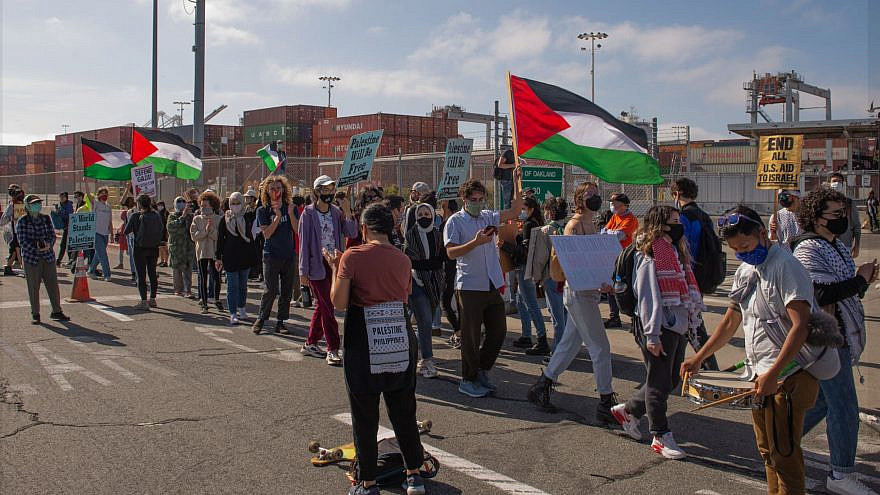 (June 6, 2021 / JNS) Hundreds of anti-Israel protesters prevented the unloading of an Israeli container ship from Asia at the Port of Oakland, Calif., on Friday, with the cooperation of the local longshoremen’s union, which refused to unload the vessel.

The protest was sponsored and organized by the Arab Resource and Organizing Center (AROC), a pro-Palestinian BDS group operating in the Bay Area.

In a Sunday Facebook post, the group, which claimed “thousands” streamed to the protest throughout Friday, praised International Longshore and Warehouse Union (“ILWU”) Local 10, which it said had “honored the six simultaneous community pickets during both the morning and evening shifts, and did not work the ship.”

“Knowing that it could break neither our blockade nor the workers’ demonstration of solidarity, in a dramatic move, community members watched as the Israeli apartheid-profiteering ship left the port of Oakland! #BlockTheBoat #BDS,” said AROC.

The Zachor Legal Institute, which combats BDS and anti-Semitic organizations in the United States, told JNS that by refusing to unload a ship with perceived Jewish ownership, the members of International Longshore and Warehouse Union Local 10 had engaged in an “unlawful secondary boycott in violation of longstanding National Labor Relations Act rules.”

“Local 10 has a history of these types of violations, and members of the union have openly supported the terror-backed groups promoting the boycotts,” said Zachor.

In a May 16 letter to the president of Local 10, Zachor said the boycott “is being promoted by a foreign organization” whose members include known terror groups, among them Hamas and the Popular Front for the Liberation of Palestine.

“[Y]et Local 10 cooperated with the racist boycott despite knowing of its illegality and discriminatory intent,” said the group.

The Israeli ship, the ZIM Volans, originally intended to dock in Oakland the week of May 17, but then turned towards Los Angeles, according to AROC’s website. At some point, for reasons that aren’t clear, it again made for Oakland.

The last time an Israeli ship attempted to dock at the Port of Oakland was in 2014. The ship, the ZIM Piraeus, was met by protesters who physically threatened warehouse union workers and blocked their vehicles, according to reports at the time. The protesters succeeded in driving the ship from port.

In the wake of their success in Oakland, pro-BDS activists called for a June 6 boycott of the ZIM Tarragona, scheduled to dock in the Port of New York and New Jersey on Sunday.