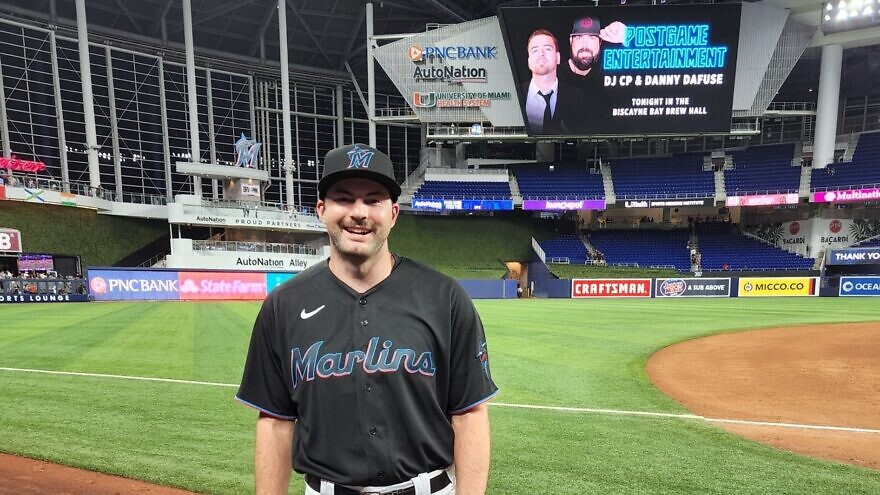 (August 16, 2022 / JNS) The Miami Marlins baseball team has a good sense of humor and loves a good fish story. When Jewish player Jake Fishman was called up to the majors from the triple-A Jacksonville Jumbo Shrimp organization, the Marlins tweeted, “Last name says it all. Newest FISHman,” with a photo and caption “Jake Fishman: Welcome to the Show.”

The 27-year-old left-hander from Sharon, Mass., known for his sidearm delivery, threw mostly sinkers and sliders in his recent three-and-one-third-inning debut against the first-place New York Mets on July 31. While most of the pitches came in under 90 miles per hour, Fishman threw 33 strikes in his 49 pitches. Yet despite his successful appearance, Fishman was designated for assignment the next day to make room for lefty pitcher Jesus Luzardo, who returned to the team as he came off the 60-day injured list.

When self-described “huge Miami Marlins fan” Michele Lobovits heard that Fishman was sent down to the minors, she was disappointed. Lobovits said that she and other Jewish members of a diverse baseball chat group “were so excited for Fishman. Unfortunately, he was kind of a pawn. He pitched in one game and was DfA’d. That means another team could pick him up. Or we could get him back.”

Fishman spoke by phone with JNS while relaxing at his parents’ home in Sharon. He doesn’t share Lobovits’s disappointment and is relentlessly positive as he recounts the story of his Major League debut and shares tales of his baseball career to date.

“It was the moment you dream about for so long,” said Fishman of being told by Marlins manager and Major League Baseball legend Don Mattingly that he was being activated. “You know you are forever a big leaguer—whether you ever pitch or not.” 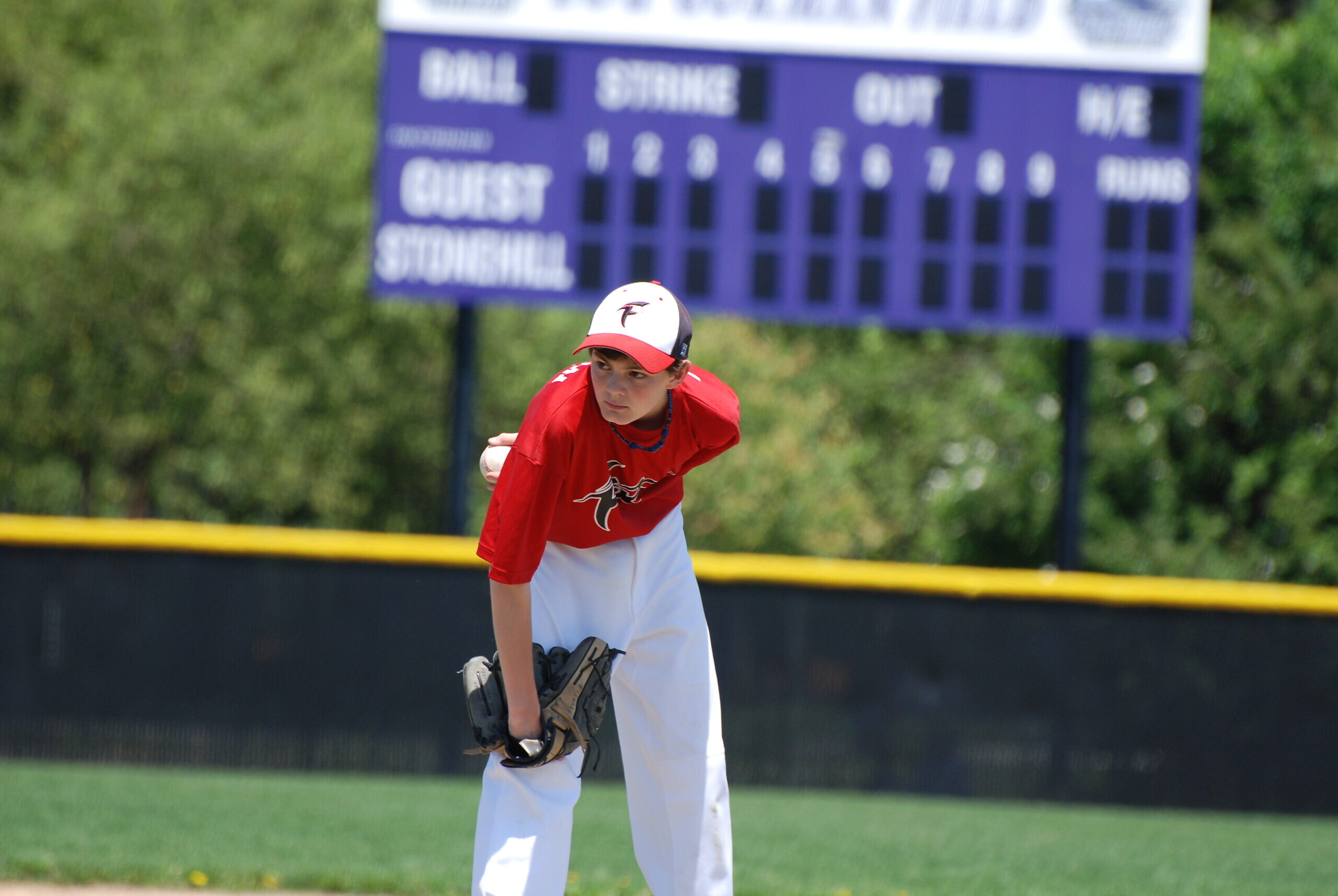 ‘My first pitch was a strike’

Fishman recalled that he got called to the manager’s office while on the road in Georgia. “It really happened quickly. He told Nick Neidert and me that we were going to the Marlins, but didn’t know [at the time] if we’d be activated. The next day, we flew to Miami and spoke with Mattingly, and he told us he’d keep us posted.”

Fishman called his parents, Hutch and Cindy, at 10:30 p.m. on July 29 and told them: “I may get called up.” His parents began searching for flights to Miami. They were not successful but did manage to get one to West Palm Beach and then drove two hours, arriving just in time for the Friday-night game.

Cindy gave a television interview as she watched from the stands along with a small entourage that included Jake’s girlfriend, a lifelong friend and his trainer. She recounted that “we had to really scramble to get a flight down here. All the flights were booked; we had to fly into West Palm Beach. You know all the airports are crazy and the car-rental places are crazy, but we managed to get here. And ever since, we’ve been here [at the ballpark] every day, and it has been great!”

Fishman, who wore No. 94, didn’t play that night. He says he watched the games on Friday and Saturday from the Marlins bullpen.

On Sunday, he was following pitcher Pablo Lopez closely as the Marlins trailed 6-0 in the third inning. “His pitch count was going up, and I was getting ready. In the third inning, they called down to the bullpen and said, ‘Get red hot,’ ” a sign that he might be called in to pitch. When he finally got the nod, Fishman ran out to the pitcher’s mound.

“It was a surreal feeling!” he recalled.

Mattingly tried to put Fishman at ease. “He told me there were guys on first and second, and two out, and said, ‘Go get ’em!’ He made it feel like a regular baseball game.”

Fishman came on with the Marlins trailing the Mets 6-0 in the third inning. He had to come to terms with the fact that he would be facing Mets shortstop and four-time all-star Francisco Lindor. “I didn’t imagine I’d be going up against Lindor as my first batter. I was freaking out a bit! My first pitch was a strike, and I said, ‘I think we got this.’ ”

“He grounded out to third on a sinker, and it helped me calm down and know I’d be fine,” said Fishman, who faced each batter in the Mets lineup at least once and gave up one run on four hits in the Marlins 9-3 loss at Loan Depot Park.

He learned that his time at home with his parents would soon come to an end. He cleared waivers and flew to Jacksonville to rejoin the Jumbo Shrimp, but remains upbeat.

Hutch Fishman said his son was born into a baseball family: “What helped his baseball enormously was that his brother, who is four-and-a-half years older, let Jake play with him and his friends. … He was 8 playing with 12-year-olds.”

Fishman attended Hebrew school and celebrated his bar mitzvah at Congregation Klal Yisrael in Sharon. “It was a lot of work learning to read from the Torah, but it felt rewarding,” he said. Fishman acknowledged that his Hebrew-school attendance and temple involvement “tapered off” a bit after his bar mitzvah so he could focus on baseball.

Despite a successful high school baseball career, he was not recruited by Division 1 schools for college baseball. Hutch said, “He was 5 feet tall when he was a freshman in high school. … He grew late, so no D1 schools were interested.” Fishman was reportedly 5’7” until he had a seven-inch growth spurt in his junior year. He now stands 6’3” and weighs 215 pounds!

Fishman went on to pitch at Union College in Schenectady, N.Y., where he led all of college baseball with a 0.41 earned run average. He was selected in the 30th round of the 2016 Major League Baseball draft by the Toronto Blue Jays. As he was still in college, he negotiated a contract that would include paying his tuition. Fishman returned to Union in 2018 to complete his degree in managerial economics with a minor in digital media. He spent six years in the minors with the Blue Jays organization before being selected by the Marlins in 2020.

Fishman was also on the roster for Team Israel at the 2017 World Baseball Classic.

Peter Kurz, general manager of Israel’s Olympic and national teams, noted that “Jake Fishman was on our extended pitching roster in the 2017 WBC, but unfortunately, was not needed by the team. He has come a long way since then, and making his debut in MLB this past week was wonderful to see. He played for us in the Olympics and is a big side-armed lefty who pitched in three critical games for us. He was a wonderful teammate and really loved to be around the guys. He fit in perfectly with the team, and I hope that he’ll be on our 2023 WBC team as well.”

In order to play on Israel’s Olympic team, Fishman needed to obtain Israeli citizenship by formally making aliyah in 2019. “Traveling the country and competing in the Olympics were definitely highlights,” he reported. He was struck by the “amazing food” in Israel and was surprised by just how modern Tel Aviv was, saying with gusto: “I want to go back!”

Fishman observed that “competing in the Olympics is different than regular professional baseball—in Minor League Baseball, the team is focused on development. In the Olympics, all that matters is winning and getting the job done!”

In 2021, Israel defeated Mexico 12-5 in the double round-robin phase of the Olympic baseball tournament. Fishman said that “winning versus Mexico was a very special moment.”

The Fishman parents were proud of Jake for playing for Team Israel in the Olympics. “We woke up early and stayed up late to watch all of the games. Watching Jake play with former Major League players with good careers was cool,” said Hutch.

After years in the minors and a stint with Team Israel, Fishman finally saw Major League action. While his stint with the MLB Marlins was short-lived for now, he said he is pleased to remain in the Marlins’ system. He may even get the second chance that will make Lobovits and other fans happy. 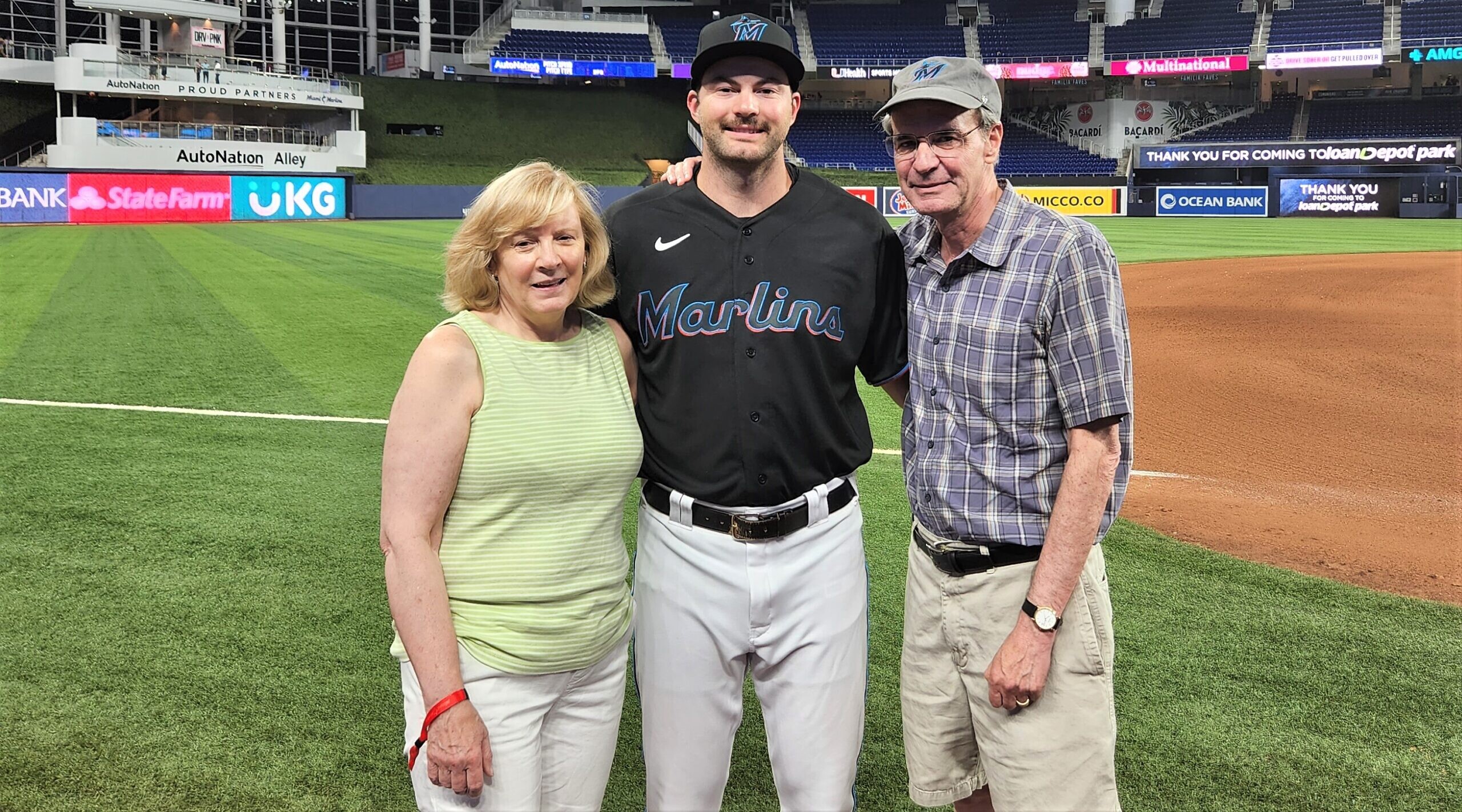 Jake Fishman and his parents, Hutch and Cindy Fishman. Credit: Courtesy.
Republish this article in your newspaper or website