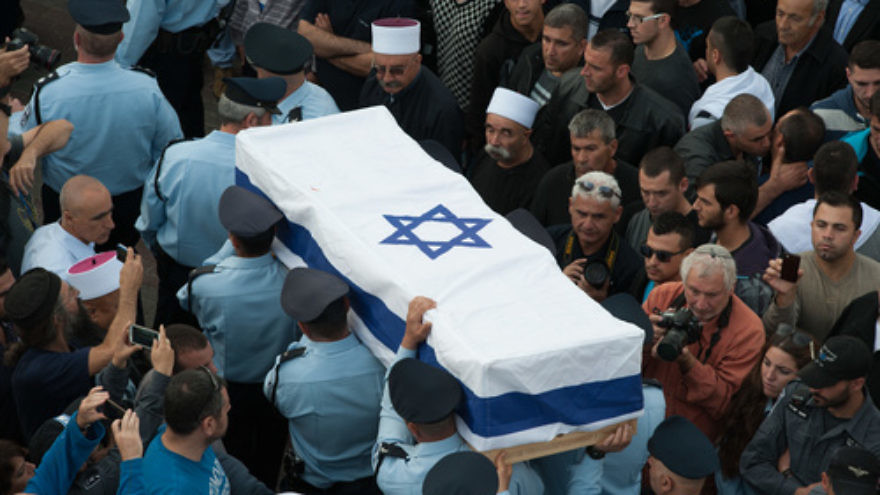 Members of the Israeli police carry the coffin of Druze police officer Zidan Saif during his funeral in the northern village of Yanuh-Jat on Nov. 19. Saif was killed while trying to save Jewish worshippers from Palestinian terrorists who attacked a Jerusalem synagogue on Nov. 18. Credit: Flash90.
Republish this article
1290 WORDS
Spread the word.
Help JNS grow!
Share now:

(November 21, 2014 / JNS) The Nov. 18 killing of Israeli Druze police officer Zidan Saif, who was the first officer to enter the scene of a Palestinian terror attack on worshippers at a Jerusalem synagogue, has led to an outpouring of support from Jews for the Druze community. Thousands attended Saif’s funeral near his home in the Western Galilee.

“He is a source of pride for you, the Druze people, for the police, and for the people of Israel,” Israeli Public Security Minister Yitzhak Aharonovitch said at Saif’s funeral. “The values that you instilled in him compelled him to protect, and he fell while defending the state of Israel. We have that shared fate. Together we will fight the murderers.”

Another Druze police officer, Jadan Assad, was killed in a Nov. 5 Palestinian vehicular terror attack on a Jerusalem light rail station. Since the deaths of Assad and Saif, many Israeli Jews have turned to social media to offer condolence messages, often referring to the Druze and Jews as “brothers.”

“Most in Israeli society view the Druze very positively,” Shmuel Shamai, a professor at the Golan Research Institute and the Tel Hai College in Qiryat Shemona, told JNS.org. Druze routinely serve in the Israel Defense Forces, the Israel Police, the Border Police, other security agencies, and Israelis “really appreciate their culture,” said Shamai.

The Druze population in Israel totals about 120,000 and resides primarily in the Galilee region and the Golan Heights. The largest Druze town in the country is Daliyat al Karmel, located on Mount Carmel near Haifa. The Druze are considered a separate religious minority, following a monotheistic faith with roots in Islam, Judaism, and Christianity. The Druze revere Moses, Jesus, Mohammed, and most notably Jethro, the father of Moses’s wife Tzipora.

“We are the sons of Jethro. Jethro ordered us to save the eternal people, the Jewish people, and the land of Israel,” Atta Yemini Farhat, chairman of the Druze Zionist Council for Israel, told JNS.org.

In contrast with the positive reputation that the Druze community holds among Jews in Israel, Muslims in the Middle East have historically viewed Druze as an “unwanted minority,” Shamai said, and Israeli Arabs tend to see them as “collaborating with the state of Israel.”

Since this summer’s war in Gaza, some Muslims “have been inciting [against] the Druze all over the country,” Farhat said.

Fighting recently broke out between Muslim and Druze residents of Abu Snan, a small village in the Galilee. The village’s 13,000 residents include 7,000 Muslims, 4,000 Druze, and 2,000 Christians. More than 40 people were injured in the clashes.

The Druze Zionist Council for Israel was founded five years ago in response to incitement by Arab members of the Israeli Knesset. Currently, with the cooperation of the World Zionist Organization in Jerusalem, the Druze council takes members of the Druze community on tours of Israel to teach them more about Zionism and the history of the Jews in Israel, “from the bible to the Palmach (the elite fighting force of the pre-state Haganah forces).”

“We [Druze] try to help the Jewish people,” he added, because among “the Jewish people here in Israel we feel freedom,” unlike in the Arab countries where “women are stoned, gays are hanged, Christians [and other] minorities are persecuted.”

But the Israeli Druze didn’t always align with Jews in the conflict with Muslim Arabs. Druze living in the British mandate of Palestine were primarily pro-Muslim prior to the establishment of the state of Israel, and only during the Israeli War of Independence in 1948 did the Druze realize “that the Jews were going to win,” after which point they “decided to change positions to the Jewish side,” Shamai said.

Tarif convinced the Druze living in the territory of modern Israel not to collaborate with the invading Arab armies during the 1948 war. While many Palestinians fled their homes during the war, the area’s Druze stayed in their villages.

Starting in the 1950s, all Druze men have been required to serve in the IDF. Women are exempt on religious grounds. Until the 1960s, the Druze served in separate IDF units, but now they are accepted into all IDF units together with Israeli Jews.

But Druze residing in the Israeli Golan Heights exist in a precarious situation. Only about 10 percent of their community has actually accepted Israeli citizenship. The rest are only residents, which means “they have all the same rights and obligations,” except they cannot vote in Knesset elections and cannot get an Israeli passport, Shamai said.

The Golan-based Druze community’s hesitancy to become citizens stems from fear that the territory might be returned to Syria one day, and if they are Israeli citizens in that scenario, they might be persecuted for collaborating or siding with the Jewish state.

“If the Golan is returned to Syria, almost all of [the Druze] will try to stay in Israel,” Shamai said. “In Israel they have freedom of religion. … In Israel they can slander the Israeli government [if they want to], but they are afraid to say anything against [Syrian President Bashar al-Assad] to this day.”

Yet Golan-residing Druze tend to support Assad, much like the Syrian Druze. Despite his mostly negative reputation when it comes to human rights, Assad has protected minorities such as the Druze and Christians in his country. Therefore, Druze residing in the Israeli Golan fear that their situation could worsen if Assad is removed from power in the Syrian civil war.

With respect to Israeli Druze as a whole, they are not on equal footing with Jews in every aspect of the country’s society. For instance, the Israeli Education Ministry budgeted a core sum of about 25,000 shekels per student in 2013, according to Haaretz—but the distribution among different schools can vary and Jewish Israelis tend to gain greater access to the educational funds, said Shamai. Yet there are initiatives trying to compensate for potential shortfalls in education funding for Israeli minorities, such as the Ytek association, which collaborates with the Israeli government to improve technological education for the Druze and Circassian communities.

“These gaps are being minimized,” Shamai said.

An impressive advancement in Druze education has been evident in Beit Jann, a Druze village on Mount Meron in northern Israel. Despite Beit Jann’s reputation as one of the poorest villages in Israel, in 2013 it ranked third in all of the country in terms of the percentage of high school students who were eligible for a matriculation certificate.

Eighty-five percent of the students in Beit Jann successfully completed their exams. That figure is 700 percent higher than what it was 13 years prior to last year’s assessment and 15 percent higher than it was in 2012, according to the Times of Israel. By comparison, only 66.6 percent of Jewish high school students in Israel (not including those in haredi schools) passed their matriculation exams.

The two Druze police officers killed in the recent terror attacks, meanwhile, are part of a long line of Druze who have given their lives to protect the Jewish state. About 400 Druze IDF soldiers have been killed in action over time, according to statistics reported by Globes.

“We are full Israeli citizens… we must protect the country,” Farhat told JNS.org.