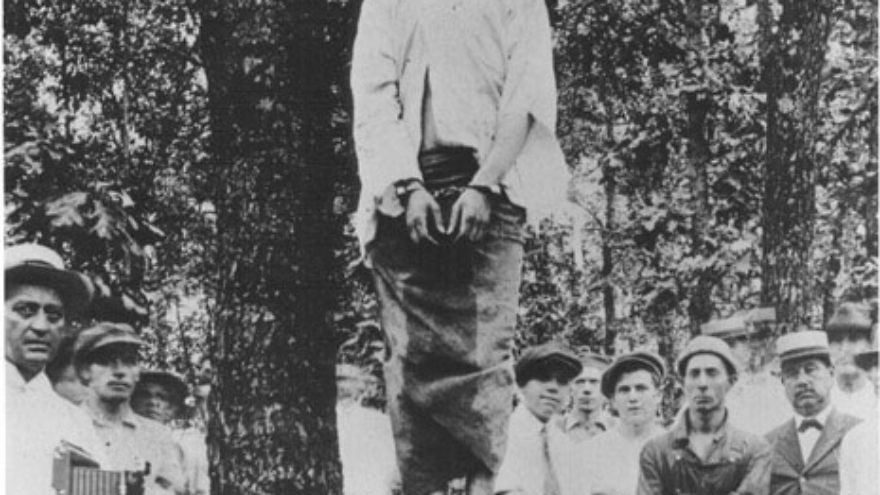 In the early hours of Aug. 17, 1915, a 31-year-old man took his last breath as the table beneath him was kicked out and the short rope hung from an oak branch snapped his neck.

The man hanging from that tree was an American Jew by the name of Leo Frank. Although Frank was the only Jew in the history of America lynched by a mob, his death had a profound and lasting impact on American Jewry.

Earlier, Leo Frank, a superintendent at a pencil factory in Atlanta, had been sentenced to death on questionable evidence for murdering 13-year-old Mary Phagan in 1913. She had worked at the factory. His trial was a foregone conclusion; Frank had already been convicted in the court of public opinion.

The Northern Jew was the obvious target of the people’s rage. A hate-infused trial ensued, and Frank was portrayed as the insidious Jewish infiltrator, taking what he pleased.

A conviction quickly came, and Frank was sentenced to death.

As he went from appeal to appeal, the case against him began to fall apart. Even some of his accusers conceded that Frank had not murdered Mary Phagan. After his appeals had been rejected by the Supreme Courts of both Georgia and the U.S., Georgia Governor John M. Slaton investigated the body of evidence and, taking a bold stand, commuted Leo Frank’s sentence to life in prison. Slaton did not believe the accused had been guilty of the crime.

But this did not sit well with a community longing for justice but blinded by bigoted rage. After he arrived at the Milledgeville State Penitentiary, Frank’s throat was slit by a fellow prisoner. He survived this attempt on his life, yet the wound had barely healed when on Aug. 16, 1915, a well-oiled mob of 25 rolled up to the prison gates, removed Frank in less than a half hour without firing a shot, and brought him to Marietta, Mary Phagan’s hometown.

After being badly beaten, he was hanged from a tree at 7 a.m.

With so many tragedies that have befallen the Jewish people, why should we take time to remember this singular incident? Because Leo Frank’s death was the functional equivalent of state-sponsored murder.

Although the governor had commuted the sentence, prominent Georgians, including judges and other state officials, plotted and carried out a seamless abduction and lynching. A huge crowd watched the lynching, which was supervised by a well-known superior court judge. That very same day the perpetrators of the crime were absolved of any wrongdoing by a grand jury, although they were all well-known locally.

Several photographs were taken of the hanging, which were published and sold as postcards in local stores, along with pieces of the rope used to hang Frank, his nightshirt, and branches from the tree.

In the aftermath of the murder, fear spread among Southern Jews. Until then, they had found themselves quite comfortable and safe in their genteel southern communities. They owned businesses, were respected by their neighbors, and even held government office.

While Frank’s death may have been the only anti-Semitic lynching in America, there were of course thousands of African Americans who were cruelly murdered in this fashion. We cannot forget these poor souls either. We must acknowledge and learn from this dark chapter of our history.

The Leo Frank tragedy occurred when American Jews in Georgia generally felt secure. Georgian Jews never imagined that a pogrom could happen to them.

The lesson here is vigilance. Today, American Jews feel safe, in every state. America is not an anti-Semitic country, on the contrary: it’s the best place in the world for Jews to live outside Israel.

But not even America is immune to hate-fueled violence against Jews. The anti-Semites are among us, and sometimes they strike in a deadly fashion, as was the case in Kansas City last year, or in Seattle in 2005. We must stay alert and be prepared to stamp out evil whenever and wherever it surfaces.

As Leo Frank twisted in the Georgian breeze, evil was rising. The Ku Klux Klan seized the hate-filled moment and held a cross burning on Stone Mountain later that same year. This would mark the resurgence of the Klan that had largely lain dormant until then.

And while the nation sought swift action and began acknowledging the hateful symbols that alleged perpetrator employed, we saw a shameful reappearance. The modern day Ku Klux Klan held a rally in support of the Confederate Battle Flag on that same Stone Mountain.

We cannot let these hate groups rise again. We cannot allow divisive rhetoric to enable enhanced recruitment into these groups.

Racism, bigotry, and hatred are not dead today, and not just in the South, but all over the country and all over the world.

Leo Frank received a partial pardon in 1986. It did not address his innocence or guilt, and it did not mention the blatant anti-Semitism that took him from handcuffs to a vigilante’s noose.

Frank still has not received justice. Let our remembrance and our vigilance be a step in that direction. The parallels and lessons from 100 years ago resonate today.

Menachem Z. Rosensaft is general counsel of the World Jewish Congress. He teaches about the law of genocide and war crimes trials at the law schools of Columbia and Cornell universities.