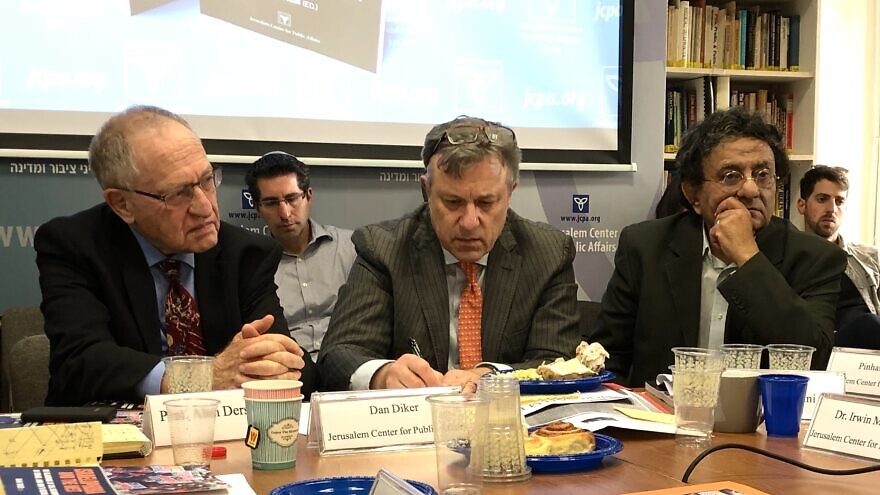 (March 4, 2020 / JNS) With the waning of bipartisan support for Israel in the United States, growing concern over the increasing hostility towards the Jewish state has crept into mainstream talk around the table.

A recent meeting at the Jerusalem Center for Public Affairs (JCPA) brought together leading thought leaders to discuss the findings of a new book published by the center, titled Israelophobia and the West: The Hijacking of Civil Discourse on Israel and How to Rescue It.

The book’s editor, Dan Diker, director of the Project on BDS and Political Warfare at the JCPA, told JNS that the work will help “rebrand the unprecedented rhetorical assault on Israel.”

“Israelophobia,” he explained, was a term coined decades ago by JCPA fellow Fiamma Nirenstein to characterize Europe’s hostility to Israel, insisting that it’s political criticism.

For Diker, the acceptance of radical language condemning Israel and the mainstreaming of delegitimization of Israel by major universities, institutions such as the United Nations and by some members of the U.S. Congress, is a national security issue, with the potential to destabilize the U.S.-Israel relationship.

Harvard Law School Professor Emeritus Alan Dershowitz wrote one of the chapters, titled “The Case for Moral Clarity: Anti-Zionism, Anti-Semitism, and Legitimate Criticism of Israel,” in which he decries the singling out of Israel for condemnation and demonization as “disguised anti-Semitism.”

In his remarks to the JCPA roundtable, Dershowitz asserted that this bias was not amenable to reason. “There is no possibility for reasoned debate in the United States,” he said. “In my lifetime, we’re going to have to live with increasing anti-Semitism.”

However, he noted, it was anti-Semitism of a specific type that posed the greatest threat.

‘Make sure you have a powerful army’

In his remarks to the group, which included Sharansky, Abu Toameh, Kuperwasser, Nirenstein, NGO president professor Gerald Steinberg, Israeli journalist Ben-Dror Yemini, Knesset member Orit Farkash HaCohen, and Ethiopian community activist Messeret Woldemichael Kasbian, Dershowitz said what many in the United States and Israel have put forth: that the BDS movement has been misunderstood by Jewish leaders.

The goal was never to actually boycott or divest from Israeli companies, but rather “to propagandize future leaders of America. It’s an attempt to change the reality of how young people see Israel.” BDS, he added, has nothing to do with the so-called occupation of territories or a two-state solution.

It’s also more a tactic than a movement, argued Dershowitz—“an extraordinarily successful” one at that. “It’s a tactic based on deception and lies, designed to destroy the nation-state of the Jewish people.”

For Israeli journalist Ben-Dror Yemini, BDS is not the most pressing problem. On his speaking tours of American college campuses, said Yemini, he encounters abject ignorance about Israel among Jewish students and faculty. It is this ignorance, he said, that renders them so susceptible to anti-Israel messages.

Sharansky said the only way to build bridges between American Jews, who are overwhelmingly liberal, and Israelis, whose main interest is to defend the Jewish state, is through focusing on human rights.

According to Sharansky, the Israeli government must “show there’s no difference between anti-Semitism on the left and the right.” He called on the government to fight against all those who abuse human rights and to ask the United States to do the same.

In his concluding remarks, Dershowitz had a grim message for Israel.

“Do not count on the U.S.  Count on yourselves. Make sure you have the most powerful army. We have to show our strength. Make alliances but be self-interested. Don’t ever compromise security on the basis of getting good PR.”