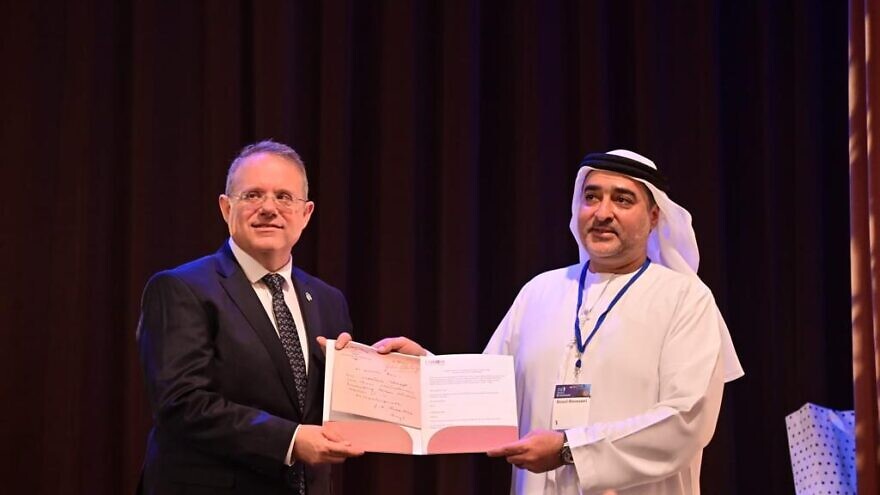 (August 30, 2022 / JNS) Former United Arab Emirates official Ahmed Obaid Al Mansoori said on Monday that it is critical to peace for young people in the Middle East to learn about Israel, Judaism and Zionism.

Al Mansoori, a former member of the UAE Federal National Council and founder of the Crossroads of Civilization Museum in Dubai, as well as of the first Holocaust memorial gallery in the Arab world, spoke on stage at a gala event in Basel, Switzerland marking the 125th anniversary of the First Zionist Congress.

“It is of utmost importance that the young generations of the Middle East will learn about Judaism, Zionism and Israel—this will strengthen peace, not only between Israel and the United Arab Emirates, but between the entire region,” he said

“It is important that we live side-by-side with mutual respect for one another, understanding the history and values of each nation and its people,” he added.

The award-winning Crossroads of Civilization Museum is located at the Royal House on the main road in Dubai’s historical district, and houses ancient Jewish documents, letters, and coins. Part of the museum is dedicated to presenting the rich history of the Jewish people in the Middle East, emphasizing that Jews are a native and integral part of the region.

On stage at the event in Basel, Al Mansoori revealed a rare letter written and signed by Theodor Herzl, according to a statement from the World Zionist Organization. The letter, which he acquired in Vienna in 2016, was written in 1897 and has been authenticated, according to the statement. It has been on display at Al Mansoori’s museum in Dubai as a part of a collection of historical Jewish documents and items.

In the letter, Herzl writes that he cannot accept the prospective applicant to the organization which he established. Evidence indicates that this is a refusal to
accept the applicant to the Zionist Organization, days before the First Zionist Congress in Basel, Switzerland, according to the WZO.

“Herzl never dreamed that the day would come that a brave Arab leader would participate in a Zionist Congress together with thousands of Jews from all over the world whose goal is strengthening and development of the independent and sovereign State of Israel,” he added.

Israeli President Isaac Herzog arrived in Switzerland on Monday to join nearly 1,300 Jewish leaders, business people and donors from 38 countries for the event.