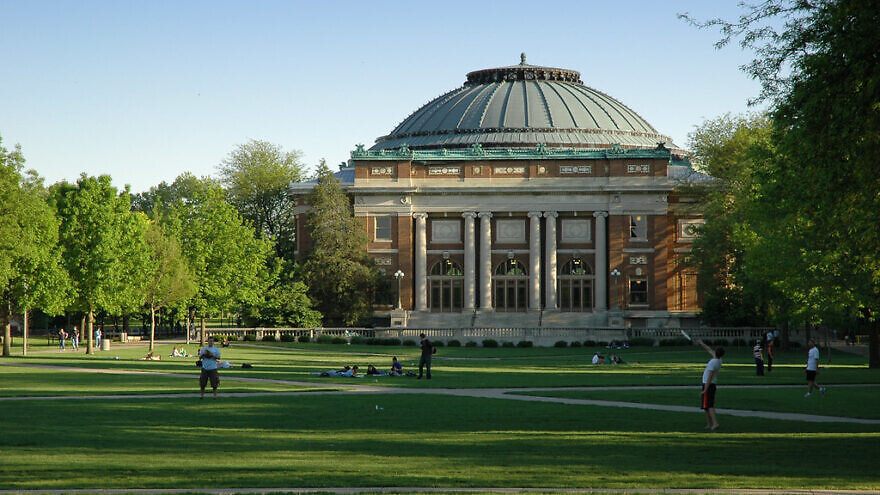 (September 24, 2020 / JNS) The student government of the University of Illinois at Urbana-Champaign passed a resolution on Wednesday night that in part called on the university to divest from Northrop Grumman, Raytheon Company, Lockheed Martin, Caterpillar Inc. and Elbit Systems Ltd. for what the resolution alleges is partaking in human-rights violations in the Palestinian territories—a nod to the anti-Israel BDS movement.

It passed with 22 votes in favor, 11 against and seven abstentions.

Jewish and pro-Israel groups immediately criticized passage of the resolution, which came amid increasing racial and political tensions nationwide.

In a Facebook post, Illini Chabad said the University of Illinois at Urbana-Champaign “should be a place of inclusivity, safety, open-mindedness and equality.”

“Rather, the Illinois Student Government (ISG) has once again used its power to exclude, bully and intimidate Jewish students,” they continued. “ISG’s behavior does not represent Illini’s values, but rather deepens division within the Illini community.”

Illini Chabad added that the “resolution was written purely to back Jewish students in a corner. Jewish students should never have to choose between standing up for social and racial justice while also having to shed their Jewish identity and their connection to the Jewish homeland to do so. Fighting for the rights of one marginalized community should not come at the expense of another marginalized group.”

The campus Chabad added that anti-Semitism at the school “has gotten out of hand.”

Also in a Facebook post, Illini Hillel said that the ISG passed the resolution “against the resounding will of the student body it claims to represent,” and that it was “an attempt to paint Israel and Jews as the obstacle to racial equity amidst the holiest time in the Jewish calendar,” a reference to Rosh Hashanah and Yom Kippur.

“The Jewish students refused to submit to this anti-Semitic litmus test. Instead, they issued a joint statement of principles declaring their steadfast commitment to Zionism and racial justice,” said Illini Hillel. “During the ISG meeting, senators made clear that they are driven by their Jewish values which call for social, racial and environmental justice.”

Hillel noted that while “BDS is deeply hurtful to Jewish students and spurs continued anti-Semitism, it has no bearing on the university or its investments.” It mentioned that university chancellor Robert Jones previously said “the campus and the entire university system are on record in opposition to any boycott of Israeli academic institutions and have opposed divestment measures here in the past.”

In a statement on Wednesday after the vote, the university said that ISG “is an independent organization that can pass non-binding resolutions on any topic it chooses,” and that “it is unfortunate that a resolution before the group tonight was designed to force students who oppose efforts to divest from Israel to also vote against support for the Black Lives Matter movement.”

Without mentioning the BDS component of the resolution, the school said that while it is “committed to dialogue and to supporting students as they navigate challenging conversations” and “will continue to plan programming designed to build understanding of different perspectives on complex and divisive issues,” the resolution “includes several points on which we can agree, but a foundational value of this institution is inclusion, and this resolution includes language that we cannot and will not support.”

In February, the ISG passed a BDS resolution that the university rejected and was vetoed by the ISG president.