(March 29, 2021, JNS Wire) (Miami, FL) –– The Jewish community of South Florida is embracing both the Miami HEAT and basketball player Meyers Leonard following his apology and his efforts at making amends after using an antisemitic slur while publicly live-streaming a video game over Twitch.

A massive street art mural says, “WE LOVE THE HEAT. UNITED AGAINST ANTISEMITISM, RACISM & ALL HATE.” This is a recognition by the South Florida community that they both acknowledge Leonard’s apology and respect the action of the Miami HEAT organization in taking the matter seriously enough to make the difficult decision to remove Meyers Leonard from the team.  The mural is co-sponsored by Artists 4 Israel and StandWithUs.

Craig Dershowitz, CEO of Artists 4 Israel stated, “Graffiti often turns old walls into modern works of art, so we hold dear the belief that an individual can transform themselves and their community. We look forward to Meyers Leonard using this dark time to paint a new, more colorful and more human picture of the Jewish people as his relationships with the Jewish community continues to grow following the incident.”

That recognition is symbolized by a 28′ x 20’ foot urban art graffiti mural that went up on March 16th visible to anyone driving in or out of Miami via I-95 in the Wynwood Walks neighborhood (in the back of 594 NW 26th Street 33127.)

The mural is the brainchild of Miami natives 1Der and Reds who represent Artists 4 Israel in Florida. Neither is Jewish; Reds is Latinx and 1Der is Black. Reds went on a mission with Artists 4 Israel to Israel to paint buildings damaged by war and terrorism. Both artists say they are excited to use their creative skills to celebrate people conquering hate.

“As an organization we stand up to antisemitism because antisemitism hurts everyone. When you allow any kind of hate, it inevitably spreads and can become dangerous,” says Sara Gold Rafel, Executive Director of StandWithUs/Southeast. “Jews around the world are celebrating Passover – and that holiday reminds us that redemption is possible. It takes work, but like our ancestors, we can get free of what enslaves us. We can see that Meyers Leonard is sincere about freeing himself from the antisemitism he may have learned growing up.”  #standuptohatred

After the outcry following Meyers Leonard’s comment, Leonard reached out to the rabbi who organizes the Miami HEAT’s Jewish Heritage theme night. “He came to me on his own and has until now not even let anyone know,” says Rabbi Pinny Andrusier of Chabad Southwest Broward. “We invited him to a Shabbat dinner with a Holocaust survivor. You could see tears in his eyes as he heard their story. He then asked them for forgiveness.”

The Miami HEAT took a difficult but firm stand against antisemitism. Concurrently, Meyers Leonard is taking concrete steps towards making amends. Even though Leonard is leaving Miami, the basketball star seems determined to not only learn from his mistake but to use his influence to teach young people to reject hatred.

The Jewish community through Artists 4 Israel and StandWithUs are delighted to both show respect for the Miami HEAT’s strong stand against hate and also call attention to Leonard’s journey towards redemption. The captivating street mural displays that story where everyone coming into Miami can see. 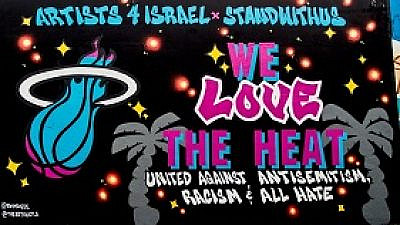 Republish this article
About The Publishers
StandWithUs and Artists 4 Israel
About Artists 4 Israel: Artists 4 Israel (A4I) prevents the spread of anti-Israel bigotry through art and helps heal communities and people affected by terrorism and hate. artists4israel.org About StandWithUs: StandWithUs (SWU) is a non-partisan, international Israel education organization that works on five continents to inspire and educate people of all ages and faiths about Israel, as well as challenge misinformation and fight against Antisemitism. standwithus.com
Publish your organization's press release on JNS Wire
Releases published on the JNS Wire are communicated and paid for by third parties. Jewish News Syndicate, and any of its distribution partners, take zero responsibility for the accuracy of any content published in any press release. All the statements, opinions, figures in text or multimedia including photos or videos included in each release are presented solely by the sponsoring organization, and in no way reflect the views or recommendation of Jewish News Syndicate or any of its partners. If you believe any of the content in a release published on JNS Wire is offensive or abusive, please report a release.