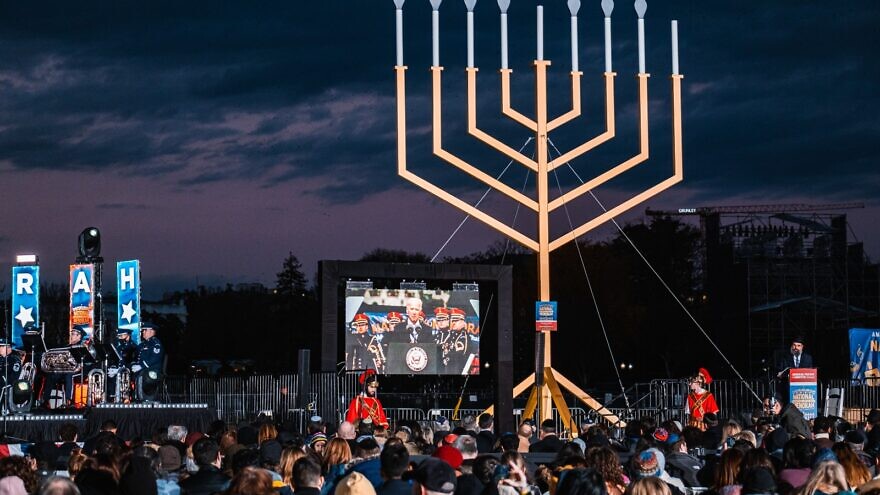 (November 30, 2021 / JNS) After having to limit numbers at its annual lighting of the National Menorah on the Ellipse on the south side of the White House last Hanukkah while the coronavirus pandemic rippled through the country, American Friends of Lubavitch (Chabad) was overjoyed to welcome nearly 3,000 attendees on Sunday to celebrate the first night of the holiday and the freedom of Jews to worship in the United States.

Sitting in rows of white chairs covering the grass of what is sometimes referred to as “America’s front lawn,” the event began with the attendees being serenaded with traditional Hanukkah songs played by the U.S. Air Force Band, followed by a brief performance by “The Three Cantors.”

This year’s event—the 43rd—was highlighted by the attendance of Second Gentleman Doug Emhoff, who represented the Biden administration.

Emhoff repeated the words of U.S. President Joe Biden’s own speech at this event when he had been vice president in 2014 that “Jewish values are American values.”

“I know this to be true. And like so many of us gathered here today, my family members, my forbearers, my ancestors, they left Europe in search of safety and security,” said Emhoff.

But, he said, that freedom to worship and live as Jews has sometimes been undermined by hate, and quoted his wife, U.S. Vice President Kamala Harris, that “we must speak the truth about this epidemic of hate.”

“American Jews and Jews worldwide have experienced and continue to experience hostility, discrimination and violence,” said Emhoff. “As the vice president said just a few weeks ago, ‘We must fight anti-Semitism and hate of every kind and call it out when we see it.’ ”

‘Resolve to strengthen your identity as Jews’

Standing in front of a new national menorah that he pointed out was made of recycled aluminum, Rabbi Levi Shemtov, executive vice president of American Friends of Lubavitch (Chabad), spoke about two surveys he recently encountered. 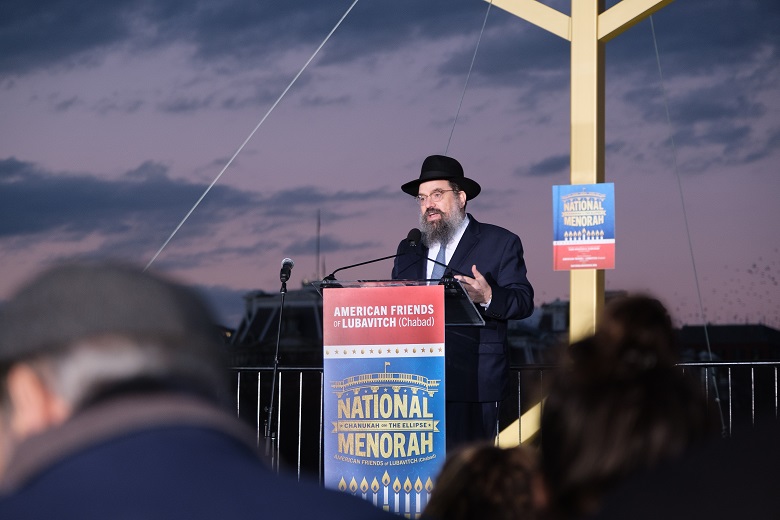 Rabbi Levi Shemtov, executive vice president of American Friends of Lubavitch (Chabad), speaks at the National Menorah lighting ceremony near the South Lawn of the White House on the first night of Hanukkah, Nov. 28, 2021. Photo by Dmitriy Shapiro.

“Now, I know my community and I am fully aware of various levels of observance therein, but Jews of no religion? That is the dream of the Hellenist oppressors of the Maccabees and the Jews of their time, who sought to destroy our temple and our faith and practice,” said Shemtov.

The two survey results, he said, may be related, with anti-Semitism rising to such levels that government officials sought the need to upgrade the position of Special Envoy to Monitor and Combat anti-Semitism to the level of ambassador.

Shemtov reiterated the appeal he made in October at an event on countering anti-Semitism held on the campus of George Washington University that the “most effective way to combat anti-Semitism is robust, informed and involved Semitism.”

“To fight for our Jewish identity, to be peaceful, we must know what it is and what it means,” he said. “So, therefore, I ask you all here today who are of the Jewish faith to resolve to strengthen your identity as Jews. Not to be afraid even as we are concerned and to remember that God told us, the Jewish people, more than any other command—beginning with our first patriarch, Abraham—to be fearless and understand that he is our shield.”

The National Menorah Lighting started in 1979 as part of a campaign initiated in 1974 by the Lubavitcher Rebbe—Rabbi Menachem M. Schneerson—to raise awareness of the holiday. It was attended in 1979, in the midst of the Iran hostage crisis, by U.S. President Jimmy Carter, who lit the shamash and shared greetings with the assembled crowd.

Every president since has recognized Hanukkah with a special menorah-lighting. In 1982, the menorah lit in Lafayette Park became publicly referred to as the “National Menorah” by U.S. President Ronald Reagan.

Rabbi Abraham Shemtov—executive chairman of Agudas Chasidei Chabad, the umbrella group of the Chabad-Lubavitch movement; founder of American Friends of Lubavitch (Chabad) as well as the National Menorah program; and chief Chabad-Lubavitch emissary in Philadelphia—also briefly addressed the attendees, speaking about how the Rebbe inspired his emissaries to light public menorahs all over the world.

He was the one who was “able to take the observance of our past, which was limited to the book, the homes and centers—synagogues—and brought it out to the outside world,” said Shemtov.

“The Rebbe rose us at the time when we and others like [us] have just recovered after the Holocaust, ran away from Russia,” he said. “Observance of Yiddishkeit took a lot of guts, which only a few were able to follow. And this was the Rebbe, who took everything out of the books into real life. As a result, there’s no point in the world today that does not have a shaliach [‘emissary’] and a functioning organization, and the possibility for the observance of our Jewishness and our message to the world.”

Then a scissor lift raised both rabbis—as well as Levi Shemtov’s son Rabbi Menachem Shemtov, and philanthropists Louis Mayberg and Brock Pierce—to the top of the 30-foot-high menorah, where they lit the shamash (“helper candle”) and the first night’s candle. Accompanied by the band, “The Three Cantors”—Jeff Nadel, Avi Albrecht and Aryeh Leib Hurwitz—sung the menorah-lighting prayers. 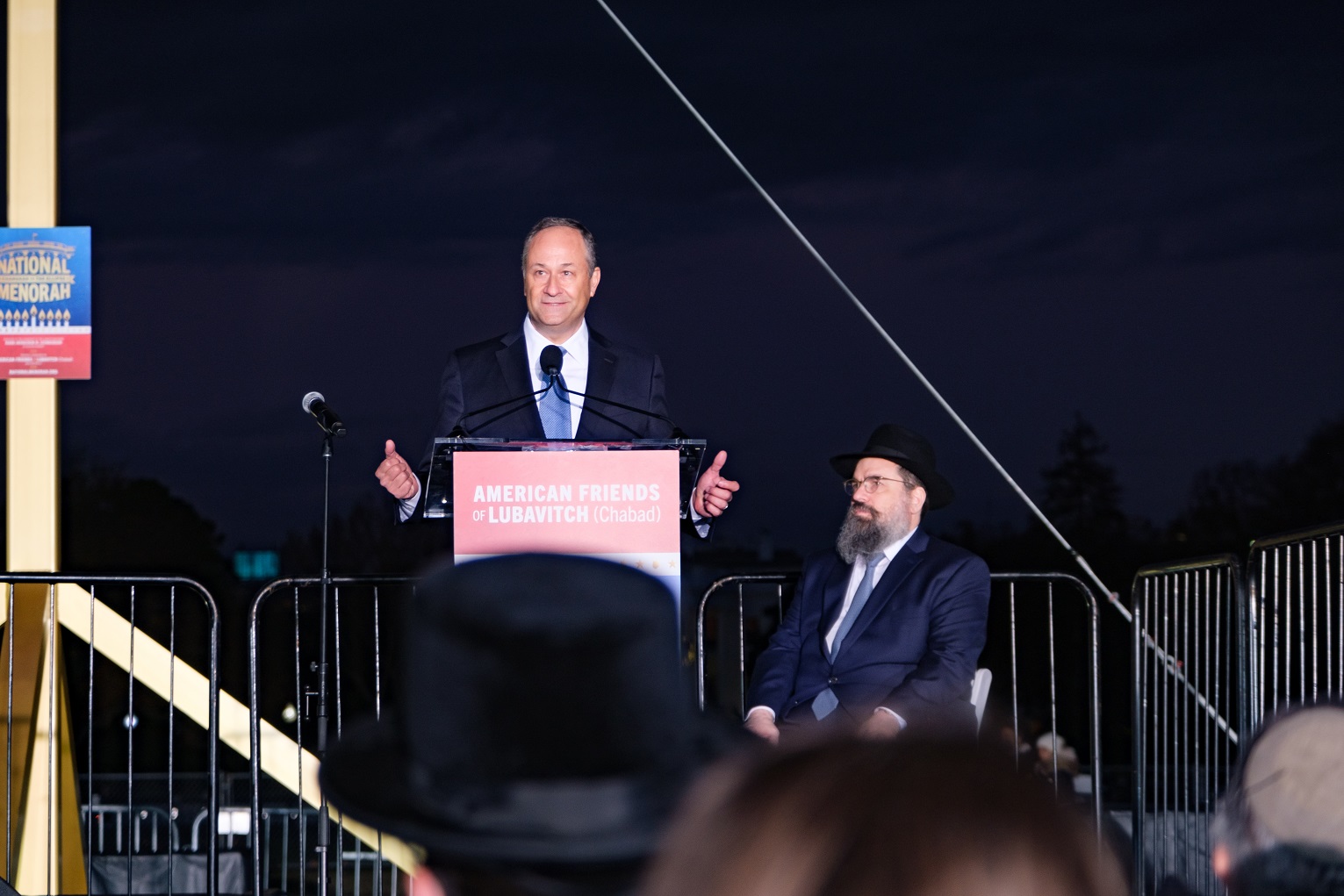 Second Gentleman Doug Emhoff served as keynote speaker during the lighting ceremony of the National Menorah near the South Lawn of the White House on the first night of Hanukkah, Nov. 28, 2021. Photo by Dmitriy Shapiro.

Hurwitz said “with precautions, we’ve got back to performing almost entirely back to the way it was before the pandemic. Which is great! I missed the stage but am glad to see that so many are now coming out and getting back to a sense of normalcy.”

In addition to some lively traditional Hanukkah songs, the cantors ended with “Oseh Shalom,” a song for peace, in addition to “God Bless America.”

‘It’s a magical time of the year’

Eric Lee of Burke, Va., and his wife, Willetta, said that they have been coming to the National Menorah lighting for the past 18 years, and that this time was phenomenal with the added production elements such as a new electrified backdrop and dancing lights.

Chaim Berkovic, his wife and their young children traveled from New York City to see the lighting, which for them is an annual Hanukkah tradition.

“We come once a year this time of the year. We come to visit Washington. It’s our nation’s capital and has a lot of history, so we try to teach the kids, and as well for us, there’s a lot of things to see. It’s a magical time of the year,” said Berkovic.

He said that the event has gotten better with time, despite the challenges posed by COVID-19.

“And this was a beautiful, beautiful event. I know very personally [Rabbi] Levi Shemtov, and this event is amazing,” said Berkovic. “It’s beautiful what they’re doing … that a lot of people can see it and also personally to participate. It feels good.”