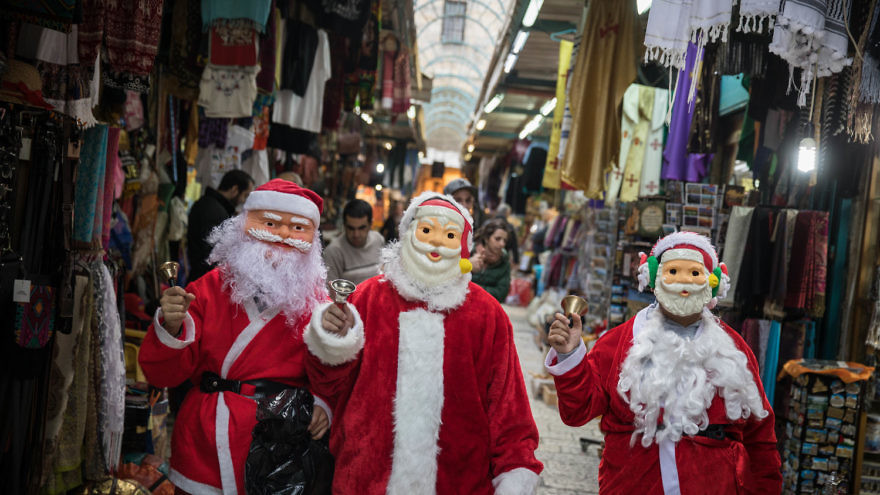 (December 25, 2017 / JNS) The Palestinian Authority (PA) and Israeli Muslim figures often voice support for Christians and seek to utilize them in the struggle against Israel, but it is the Jewish state that stands out as a defender of Middle East Christians.

In a Christmas message last Friday, PA President Mahmoud Abbas called President Donald Trump’s recognition of Jerusalem as Israel’s capital “an insult to millions of people worldwide, and also to the city of Bethlehem.”

The exploitation of Christianity by the Palestinians is not new, as their leaders have for years claimed that early followers of the faith—and even Jesus himself—were “Palestinian,” even though Palestinian nationalism is a creation of the 20th century as a response to Zionism.

But how much do Muslim Palestinian or Israeli Arab leaders actually care about Christians?

Dexter Van Zile, the Christian media analyst at the Committee for Accuracy in Middle East Reporting in America (CAMERA), told JNS that the population of Christians in the West Bank has not declined during the past few decades, as anti-Zionists claim as a talking point against Israel.

Even the anti-Israel Diyar Institute has admitted as much, declaring that “the number of the Christian population has grown ever so slightly in the past 50 years,” noted Van Zile.

Asked about the situation in Bethlehem, Van Zile responded that the number of Christians in PA-controlled Bethlehem has stayed about the same during the past several decades, but has gone down as a percentage of the city’s total population due to the growing number of Muslims.

“That being said, many young Christians have left because of the misrule of the Palestinian Authority,” added Van Zile.

At the same time, life for West Bank Christians is far better than the situation for their persecuted counterparts in Iraq, Syria and Egypt.

“Like it or not, the Christians in the West Bank have Israel to thank for that. The violence against Christians in Iraq and Syria has been in many ways a reenactment of the Armenian genocide that took place in the early 20th century,” explained Van Zile.

“Christians in the West Bank know full well what’s in store for them should Hamas’s brand of radicalism take over the West Bank,” he said.

Bishara Shlayan, a prominent Christian resident of Nazareth, told JNS that some of Israel’s Arab Christians openly support the state, but that many, including in the West Bank, are scared to speak their mind because of Muslim threats.

Shlayan, who is attempting to establish an Israeli Christian political party called Ichud Bnei Habrit (United Allies of the Covenant), pointed out that “the Muslims are stronger than us and their behavior is like that of a Bedouin tribe, but we don’t have a tribe for support, just our individual families.”

Nazareth’s Muslim mayor, Ali Salam, initially cancelled but then claimed to reinstate a number of this year’s local Christmas festivities in a protest against the U.S. policy changes on Jerusalem. A downscaled celebration did take place last Saturday in Jesus’s childhood hometown, but with fewer participants than usual, according to Shlayan. Out of fear, Nazareth Christians go along with Muslim wishes on matters such as scaling down the Christmas celebrations over Trump’s Jerusalem announcement, he said.

Shlayan also said that the security situation for Christians in the city is precarious, with Muslims successfully working for years to change the city’s character from the center of Christianity in Israel to a Muslim city.

After Israel’s War of Independence in 1948, Shlayan said that Muslim refugees from other towns moved to Nazareth. He asserted that due to current tensions in Nazareth, Christians are fleeing for safer cities such as Haifa and Shfar’am.

“It is a religious war and [Muslims] control the area,” he said, noting that Muslim migration to Europe is causing a similar clash of cultures there. But Shlayan emphasized that not all Israeli Muslims are causing problems for Christians and that some respect them.

“Thank God for Israel and that we are not somewhere else,” said the Nazareth resident, referring to the persecution of Christians elsewhere in the Middle East.

CAMERA’s Van Zile said that leading up to this Christmas, he had “seen reports of Christians refusing to celebrate Christmas because of President Trump’s announcement on Jerusalem. I’ve even seen pictures of them burning pictures of Vice President [Mike’ Pence in protest of his planned visit to the Holy Land.”

“Actions like this are required of Christians in Muslim-majority environments,” said Van Zile. “Any time people see a Palestinian Christian in the West Bank or Gaza condemning Israel, they should add an image of their own: that of a jihadist standing out of camera range pointing a gun at them and smiling in satisfaction.”