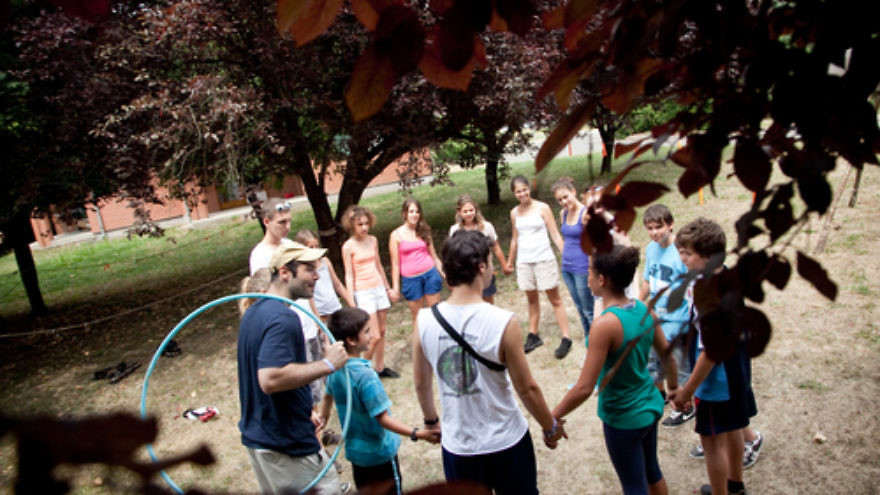 The 70-year-old, post-Holocaust taboo of expressing anti-Semitic views started to break down over the last several years in Hungary, where 100,000 Jews live among a population of 10 million. Stoked by the rise of the neo-Nazi political party Jobbik, that flame has been fueled to greater heights during the latest conflict between Israel and Hamas.

But roughly 100 miles from Budapest, on a 17-acre patch of land between a forest and a lake in rural Hungary, lies a camp that for 25 years has given young Jews from central and eastern Europe the strength to be proud of their religion and to shape their communities.

Camp Szarvas, an international Jewish summer camp funded by the American Jewish Joint Distribution Committee (JDC) and the Ronald S. Lauder Foundation, is completing its 25th summer this month. Those involved say that despite the increase in European anti-Semitism, there is a continuing and remarkable resurgence of Jewish life in the area—and much of it starts at Camp Szarvas.

Ornique, who has been working in the field for the past 11 years, said the testament to the camp’s success is that today the majority of the people who work and teach there are from Europe. When the camp was launched 25 years ago, staffers came mostly from Israel, and some came from the U.S.

“It’s a renewal of Jewish life, where Europeans are engaged in Jewish culture and thinking,” Ornique told JNS.org. “Local people have the right tools to lead—this is a remarkable outcome.”

Each summer, between 1,200 and 1,600 children between the ages of 6 and 18 attend Camp Szarvas. Youths from two or three countries participated when the camp was founded, said the current director, Alexander “Sasha” Friedman. Today, children come from 26 countries (including the U.S. and Israel) to learn about each other, to engage with what it means to be Jewish around the world, and to express their Jewish identity through words, song, and dance. Every day is a life-changing experience, many of the campers say.

Friedman, who was a Szarvas camper and counselor, said the summer experience has a ripple effect. When campers return to their hometowns, they teach their families and friends about Judaism and encourage community growth. New synagogues, JCCs, and cultural centers are being built, usually with the support of current and former Szarvas campers.

“They are proud Jews,” Friedman said.

A hallmark of the camp is its pluralistic perspective. Jews from all denominations come together to form a family. Campers that come from non-structured communities see hope in a Jewish future. Others build their Jewish future as a result of the summer at Szarvas.

“There is a good chance you will find someone who will be your partner for life here,” Friedman told JNS.org. “We have had many Szarvas weddings. Just last year, a wedding took place on the camp grounds. The campers met at camp, were counselors together, and 10 years later got married here. Their journey started here.”

In recent years, Szarvas has served as a model for similar camps. According to Friedman, there are now six other Jewish immersion camps across central and eastern Europe, all of which use the Szarvas methodology.

The camp also has a Zionist agenda, promoting Hebrew words and a love of the land of Israel. Still, noted Ornique, campers are not pushed to make aliyah. He said that is a personal decision and that the camp, as well as JDC, are more focused on creating a strong Jewish community on the ground in Europe.

Martin Levi is a Szarvas alum who now heads JDC youth programming in Latvia. He told JNS.org that while the recent surge in European anti-Semitism has struck a difficult chord with him, he is still glad he reconnected to his Jewish identity.

“I have never questioned the decision of being Jewish. … I have no regrets,” he said.

Levi said he is grateful to Szarvas and believes that the community of current and former campers can look forward to another quarter-century of success.

“Today’s campers will take over at some point,” said Levi. “We are creating generation after generation of kids… who can express their Jewish identities”

Maayan Jaffe is a freelance writer in Overland Park, Kan. Reach her at maayanjaffe@icloud.com or follow her on Twitter, @MaayanJaffe.

***Correction: This article initially stated incorrectly that the population of Hungary is 1 million. In fact, the Hungarian population is about 10 million.