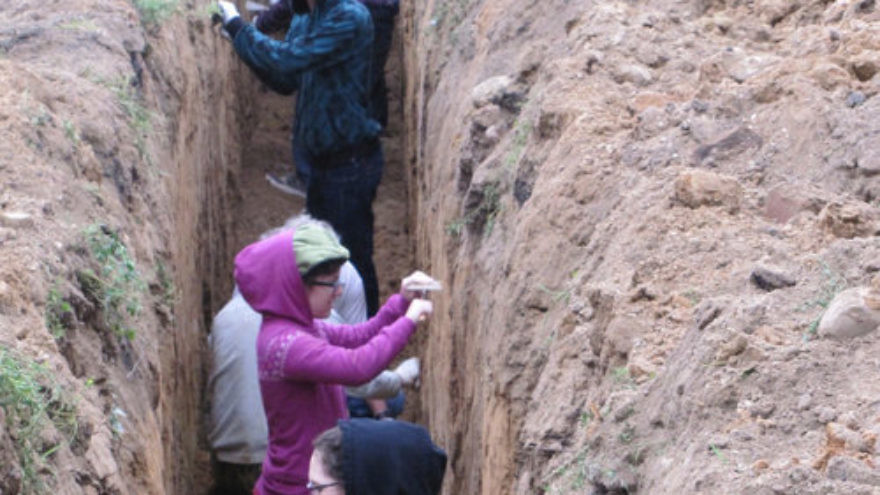 Ever since Michael Kagan, 60, was a boy growing up in the U.K., each detail of his father’s escape from a Nazi labor camp has ricocheted through his mind and heart. Now, in his new documentary “Tunnel of Hope,” the son is sharing his father’s story with the world.

It’s a story that Jack Kagan had fought to keep alive, recording not only the escape, but the murders of the vast majority of the Jews of Novogrudok—a city in Belarus—who were dead long before that fateful night.

“He was driven, determined to get it out there,” says Michael Kagan. Among his father’s projects was creating a museum at the escape site and marble monuments marking the slain Jews’ graves.

The risky escape plan was born of increasing desperation by the 240 Jews clinging to life in the Novogrudok labor camp. It was a ragtag group, the last survivors of some 11,000 Jews from the town and adjacent villages—their ranks decimated by two major slaughters in 1941 and 1942, along with starvation and illness.

Jack Kagan was 13 when the tunnel escape plan was hatched in the summer of 1943. Having lost all 10 toes to frostbite, he was recovering from their amputation when he overheard the adults, led by Berel Yoselevich, formulate the plan. It would take three months of painstaking labor, with the prisoners covering for each other in the camp’s shoemaking and woodworking factories, to excavate the 2-by-2-foot tunnel destined to carry them to freedom in late September.

Among those who made it out that night, two-thirds survived the war, with most of them—including Jack Kagan—escaping to the forest and joining the famed Bielski partisans. Some nine months later, in June 1944, Kagan was among those liberated by the Soviets.

His son, Michael, who lives in Jerusalem, shared the idea for a film with family friend Murray Kushner—the uncle of President Donald Trump’s son-in-law, Jared Kushner. He received Kushner’s pledge of support and recruited Dror Shwartz, a filmmaker who has worked at Israel’s Yad Vashem Holocaust remembrance center.

In 2012, Michael Kagan and Shwartz scouted the former Novogrudok labor camp site, now an agricultural college, ultimately winning permission to bring in escapees’ descendants to dig for the tunnel. Three of the escapees, including Jack Kagan, were among the 55 family members who made the trip from Israel, the U.K. and the U.S. that year.

The elder Kagan and the other escapees’ memories of roundups, selections and mass shootings provide the film’s viewers with context for the prisoners’ growing desperation and willingness to risk everything for a slim chance at survival. In one of the film’s most powerful scenes, Kagan simply takes off his shoe, revealing a foot without toes.

A handful of prisoners, either fearful of Nazi retribution or too weak to crawl through the tunnel, turned down the opportunity to escape. The next day, those remaining quickly erected a wall where they hid for three days. The Germans soon abandoned the camp, and the remaining prisoners were able to join the partisans in the forest.

The film, which took three years to complete, documents the escapees’ weeklong dig for the tunnel—an often tedious and frustrating job. But on the seventh and final day, the diggers switched directions, and the tunnel’s exit came into view.

“My mother was overjoyed when my kids called her to say, ‘We found the tunnel,’” reports Betty Cohen of Jerusalem, who is writing a book on the fates of all 230 escapees, including her 96-year-old mother Fania Brodsky. “Of all the tales of the Shoah, this is one that shows how resilient and resourceful the Jews were.”

Besides the escapees and their descendants, the film features the survivors’ non-Jewish neighbors, one of whom tearfully recalls the massacre of Jews. Another local speaks proudly about the Jewish lives his family saved—the Nazis killed his great-grandfather for that heroism.

David Silberklang, the senior historian for Yad Vashem’s Research Institute, lauds the film for spotlighting the story behind the story. “It’s important to know that they decided to take along the injured, like Jack Kagan after his amputation,” he says. “They said, ‘It’s going to be all of us or none of us.’ That’s a very Jewish response to the Holocaust.”

In addition to the film, which is now being broadcast by i24news across the U.S., London’s Imperial War Museum houses a model of the labor camp and a tunnel for children to crawl through. The Kagan family’s story is also among those featured in Berlin’s official Holocaust memorial.

Last December, on the 75th anniversary of the massacre of 5,200 of his Novogrudok friends and family, Jack Kagan died at 87. His son says he is glad his father lived long enough to be featured in the film, a tribute “to both his tenacity and the tenacity of Jewish life.”

The lesson is not lost on the next generation.

“Seeing where it happened made it all the more real, and gave us all some closure,” says 26-year-old Itai Kagan, Jack’s grandson. “We grandchildren have more distance. To us, my grandfather’s story is more blessing than burden.”