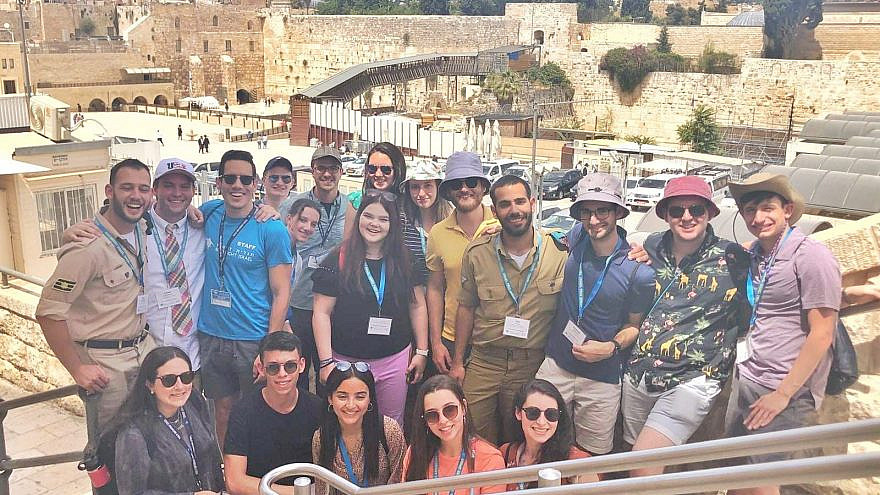 If you’re in Israel this month, you can’t miss the clusters of them downing falafel on Jerusalem’s Ben-Yehuda Street, cooling off in the Dead Sea, climbing Masada at sunrise or slipping prayers between the stones of the Western Wall in Jerusalem.

After more than a year of pandemic silence, the Birthrighters have returned with all the gusto of young adults who’d waited out the year of coronavirus restrictions with visions of Israel dancing in their heads.

Take Conor Mullaney, who applied for a Birthright Israel trip months ago with little hope of going then.

“I’d been looking forward to being in Israel for a very long time,” says Mullaney, a third-year finance student at the University of Maryland’s Global Campus, who arrived on May 24 with the very first Birthright Israel group to set foot on Israeli soil since the pandemic shut the program down more than a year ago.

“Even though I’ve read a lot on Israeli politics and history, never having been here until now, I didn’t fully understand how it all fits together,” he says. “Being here has changed my life and the way I see the world.” It also included holding the bar mitzvah he’d never had at the Western Wall with his new friends cheering him on.

Or take his fellow Birthright traveler Sami Marshak, an aspiring attorney who after the Birthright experience is starting a summer internship with a Tel Aviv international law firm. While the Rutgers University junior had been to Israel years ago with family, she notes that “it’s extremely cool being here with friends.”

And then there’s Jack Berkey, who was busy exploring the country with pals from his school, the University of Michigan. It worked out perfectly to have this opportunity to see Israel for the first time between college graduation and beginning his new job, Berkey reports. “I came with zero expectations of what I will experience,” he said. “I’ve always wanted to come but with COVID, it wasn‘t happening last year. So when I heard I could come on Birthright this spring, I thought, ‘This is my chance; I’m not going to miss out on it.’ ” 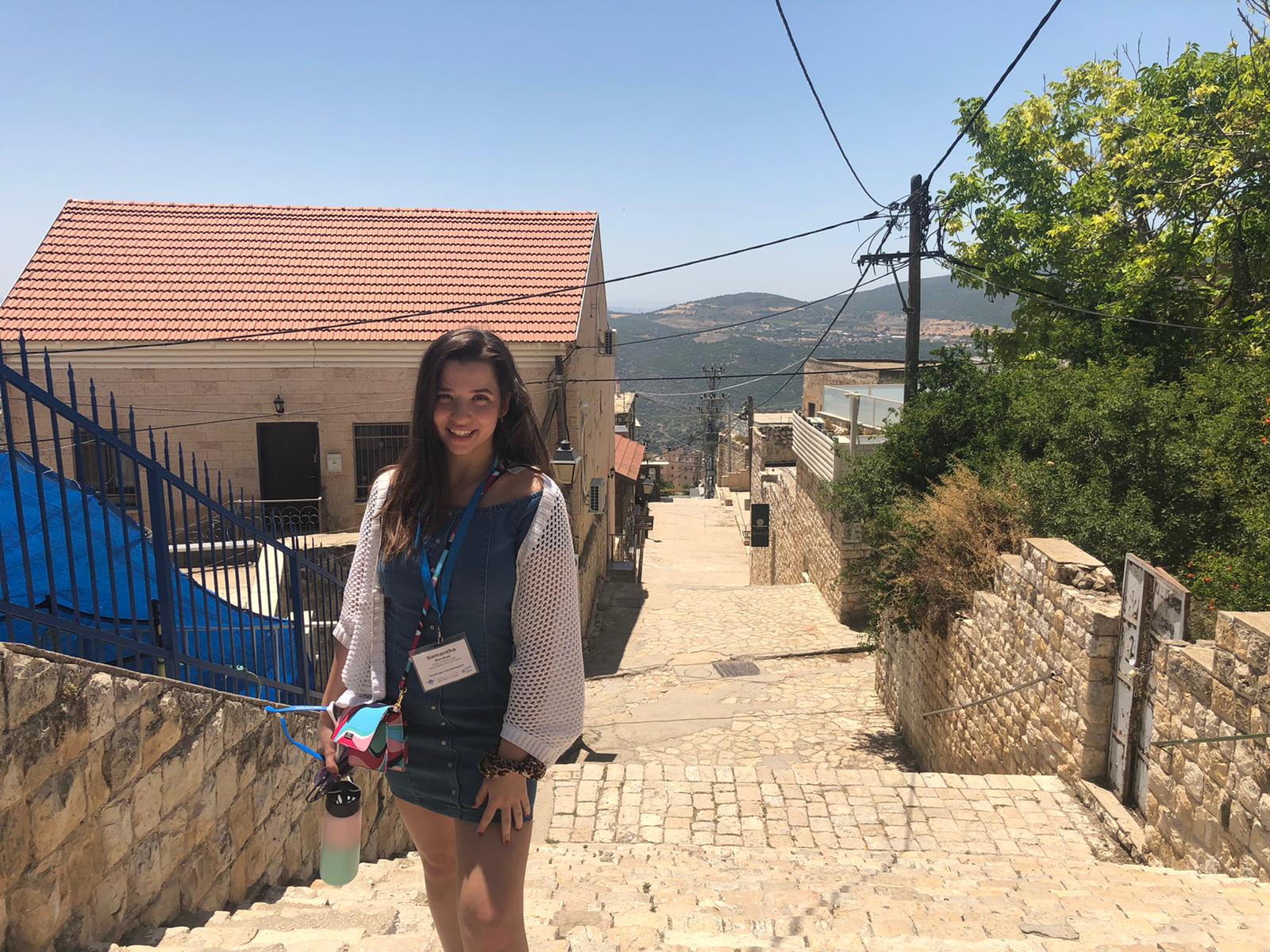 Sami Marshak, who after the Birthright experience is starting a summer internship with a Tel Aviv international law firm. She is pictured here in Tzfat, Israel. Credit: Courtesy.

These three young adults were indeed fortunate to secure a spot; some 6,000 applicants are now qualified and looking forward to going, reports Birthright’s vice president of Global Marketing Noa Bauer. Most of these are expected to be able to enjoy Birthright this summer, with another 20,000 waiting in the wings for winter, spring and beyond.

When they go, they’ll join the whopping 750,000 young adults ages 18 to 32 from 68 countries who in the last 21 years have experienced the unforgettable sights, sounds, smells and tastes of Israel through a free Birthright trip.

In fact, the newly released Pew Research Center study of American Jews found that while just under half of Jewish adults (45 percent) have been to Israel, among those ages 25 to 34, more than a quarter report having traveled on a Birthright trip.

Bauer’s stats say more than a third of the young Jewish adults have been on a Birthright trip, “which makes it a potent force for influencing how an entire generation feels about both Israel and their Jewish identity. And now, after more than a year of isolation, they’re so happy to be free to come and explore at a time when Israel is back to life and more exciting than ever.”

“I’ve always identified Jewishly, but this is my chance to find out what that really means.”

Indeed, professor and American social psychologist Len Saxe, who directs the Cohen Center for Modern Jewish Studies at Brandeis University and has been following how college students have dealt with pandemic isolation this past year, says the time is ripe for them to go. “For this generation coming off the loneliness and emotional challenges of COVID, the hunger to engage with peers makes this a propitious moment to go to Israel and an important moment in our history for young Jews to establish personal relationships with their peers, including the young Israelis they get to know on the trip.”

That’s because only face-to-face contact works for establishing bonds, he maintains. “Online works only if you’ve already formed the relationship in person, and grow and deepen it on the phone and online.”

For Scott and Amy Jaffee of Brookville, N.Y., involvement in Birthright began five years ago when their oldest son returned from his trip. “We saw how energized and inspired he was when he got back, including the rapport he had with his Israeli peers and the beginning of understanding what a young Israeli’s life is like.”

And, adds Amy, who now serves as co-chair of Birthright Israel Foundation’s Long Island Leadership Cabinet, “we began thinking about all the Jewish kids who need to go to Israel but can’t afford it, and we wanted to pay it forward.” 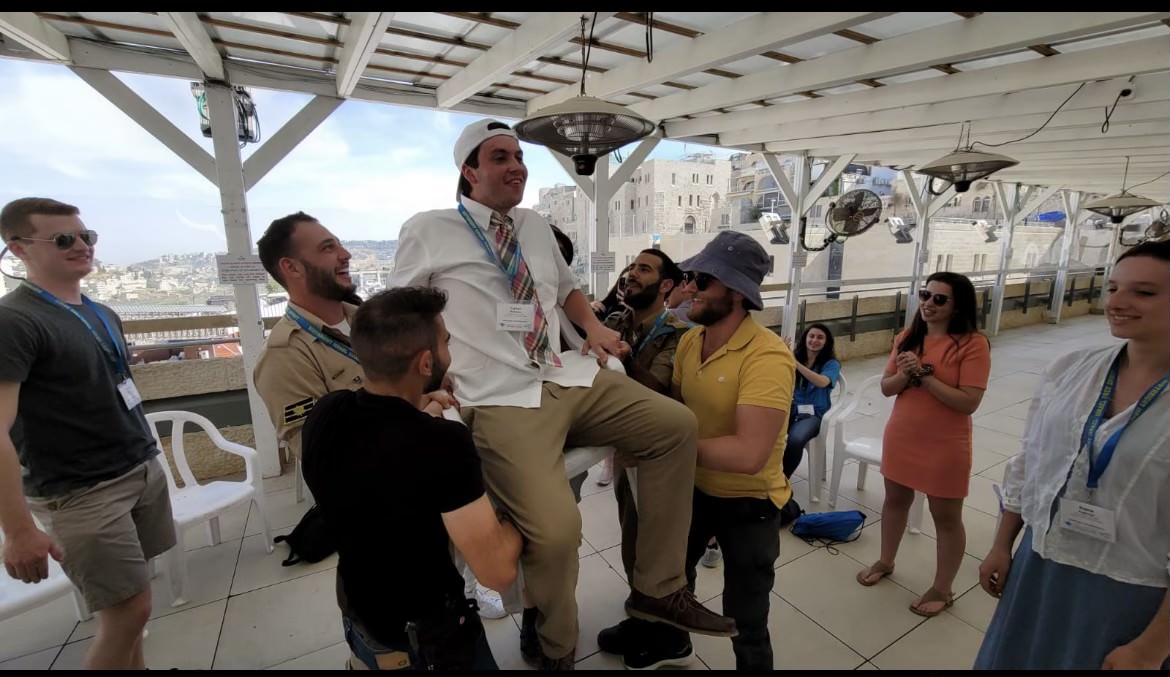 Conor Mullaney, a third-year finance student at the University of Maryland’s Global Campus, celebrating his bar mitzvah at the Western Wall in Jerusalem. Credit: Courtesy.

The rise in anti-Semitic acts and presence in the last few months, including but not limited to anti-Israel pressures from college campuses to social media to online hate to the images from the January riot on Capitol Hill, has not escaped the notice of Birthright-goers. “We’ve had our fair share of pro-Palestinian rhetoric on campus,” says Marshak, noting one professor who said that Israel is an apartheid state and that the Jews have no historical right to the land. “The media also influences what people think, including all of us who came here questioning our beliefs and not knowing how to feel about Israel.”

Her own view: “Despite Israel’s problems, here I see Jews of different politics and religious views all feeling the same way about the rise in anti-Semitism, the importance of Israel and the fear that history could repeat itself.”

Berkey, too, had heard the anti-Israel voices being raised at his school. “I’ve heard a lot about Israel, and it wasn’t necessarily positive,” he says. “But I refused to believe any of it until I could come with an open mind and see it for myself.”

The Jaffees recall meeting one young woman who’d bad-mouthed Israel on the flight over—an attitude that lasted until she got off the plane. ‘She said as soon as she arrived, she began questioning her own assumptions, and wound up falling in love with Israel and the idea of being Jewish,” says Scott Jaffee. “This kind of transformation was something we wanted to be a part of.”

Rabbi Shlomo Gestetner who directs the Mayanot Institute of Jewish Studies in Jerusalem, one of Birthright’s providers, says “the rise of anti-Semitism in Europe and now in the United States makes this such an important time to strengthen Jewish identity. And the only lasting way to do that is to come to the land filled with Jewish history, where you can hear our ancient language spoken on the street and walk on the same 2,000-year-old stones our ancestors walked on.” 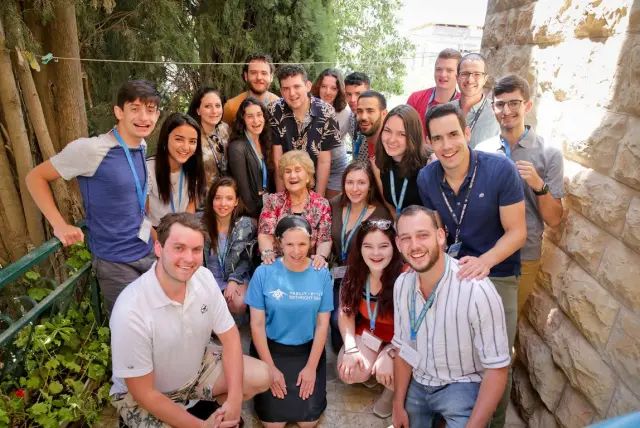 The Birthright group with a Holocaust survivor they met in Jerusalem, June 2021. Photo by Yonit Schiller.

‘The sense of unity that I never expected’

Many a Birthrighter reports those few days in Israel truly strengthen their connection to the Jewish people and to Israel, says Barry Shrage, former president of Boston’s federation, Combined Jewish Philanthropies, who now teaches at the Brandeis Hornstein Program in Jewish Professional Leadership. “It’s a transformational experience, and though we know you can’t get back what you lost so the kids who should have gone this past year might go later or we may have missed them altogether, but now is a particularly important moment to go.”

“Here I see Jews of different politics and religious views all feeling the same way about the importance of Israel.”

In a time of “woke anti-Israel and anti-Semitic propaganda, fighting it with information and advocacy can go only so deep, and facts can and will be distorted by our enemies,” continues Shrage. “The only thing that really works is getting to know their brothers and sisters in Israel, and truly understanding the heart of the Israelis. You can’t educate someone to love and identify with the Jewish people and Israel. Falling in love has to be experiential, and Birthright is the best way we have of giving them that experience.”

Bauer adds that “just getting them here and showing them the real Israel is the single most powerful way to fight BDS attacks. And, though they’re not necessarily going to wave the Israeli flag on campus when they get back, they have a much better chance of questioning the hate they could face from a place of deep connection after having seen firsthand what the Israelis are made of and what they’re dealing with.”

Bauer says when they do hear accusations, returned Birthrighters tend to “pick up the phone and call their Israeli friends and ask them what’s really going on over here.”

Berkey put it this way: While zipping up his backpack as the plane touched down at Ben-Gurion International Airport: “I’ve always identified Jewishly, but this is my chance to find out what that really means.”

Marshak discovered one thing it really means when her group arrived at Israel’s national cemetery on Jerusalem’s Mount. Herzl. “I wasn’t really expecting much,” she says. “But we saw a bunch of soldiers mourning over one grave, and everyone in my group just stopped and mourned with them, staying for the prayer. It really felt like one of us had died.

“I know I’ll always remember that moment—the sense of unity that I never expected and never felt before,” she adds. “You never know how things will affect or change you. But I guess after this, I’m feeling more open to new experiences shaping me and my understanding of things.”