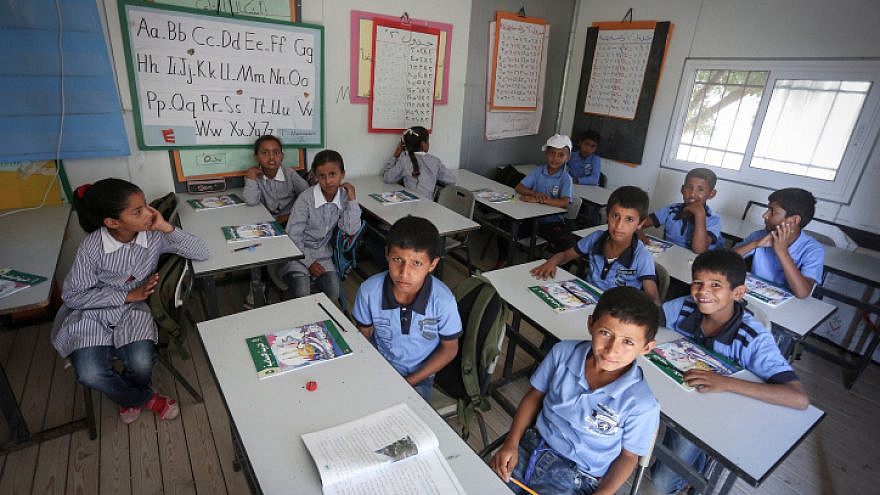 Palestinian students attend the opening of the academic year at a school of near Jerusalem on Aug. 17, 2016.
Republish this article
977 WORDS
Spread the word.
Help JNS grow!
Share now:

(April 26, 2022 / JNS) Despite Western calls for reform, the Palestinian Authority curriculum has ramped up its incitement in recent years, with school textbooks and other learning materials filled with anti-Semitism, calls for jihad, rejection of reconciliation and the delegitimization of Israel. So problematic is the content that, according to reports, it has led the European Union to freeze its funding to the P.A.

In fact, passing up an opportunity to explain the P.A.’s position, Palestinian Education Minister Marwan Awartani pulled out of a debate about the curriculum before the European Parliament’s Committee on Budgetary Control on April 20.

Marcus Sheff, CEO of the Institute for Monitoring Peace and Cultural Tolerance in School Education (IMPACT-se), a Jerusalem-based nonprofit that monitors educational materials around the world for extremist content, spoke at the Committee on Budgetary Control debate focusing on the P.A.’s new “study cards,” released in August.

Sheff told the committee that the study cards came to 10,000 pages, “roughly equivalent in size to a whole school curriculum,” and that they were “in some cases more violent and more inciteful than the curriculum that we’ve seen before.”

Describing them as “openly anti-Semitic,” he said the cards provide lessons that teach that Jews control the world, glorify suicide bombers and that those who kill infidels will go to paradise. “Newton’s laws of physics are still taught through a young girl using a slingshot. Eight-year-olds are taught math by counting martyrs. Girls are taught that to be equal with boys, they need to become martyrs,” he said, adding that a teachers’ guide “instructs educators to punish students for not connecting the Jewish religion with murder.”

Arik Agassi, chief operating officer of IMPACT-se, told JNS that he was surprised as one parliamentarian after another joined in criticism of the P.A., saying that given the E.U.’s history, he had rather expected them to criticize IMPACT-se. “We expected pushback. It was quite the opposite. They’ve had enough,” he said, noting that the European parliament has been aware of the incitement in Palestinian schools for years.

Sheff told JNS that the “most astonishing element” is that the E.U. Commission, “essentially the government of the European Union,” also said that it’s had enough and that it wasn’t going to hand over 200 million euros annually until the P.A. made “significant changes to the textbooks,” as the commission is now convinced that they “incite hatred, violence and are anti-Semitic.”

P.A. Minister of Foreign Affairs Riyad al-Maliki confirmed this development to Ramallah-based Sada News Agency in late March, saying E.U. funds have been frozen since last year, and that the E.U. Commission was divided over whether to apply conditions on the funds involving changes to the Palestinian curriculum.

However, in response to queries from JNS, the European Union would not say that funds to the P.A. had been frozen. Rather, an E.U. official reaffirmed the organization’s “long-standing commitment towards building the future state of Palestine.”

“The European Union continues to be the biggest donor to Palestine, and we hope to be able to announce a decision on future assistance and process the payment as swiftly as possible,” said the official.

‘A step in the right direction’

David Bedein, who runs the Center for Near East Policy Research and who has been covering P.A. curriculum issues for 22 years, said he is highly doubtful that any real change has taken place. “There’s nothing in the public record that says they have stopped money or that they will. We keep going to the horse’s mouth and asking. They refuse to give a straightforward answer. In fact, their statements say the opposite—that they continue supporting the P.A.,” he said.

Bedein noted that unlike the European Union, the United States under the Biden administration has actually conditioned funds to the U.N. Relief and Works Agency for Palestine Refugees in the Near East (UNRWA), demanding that it make changes to what is taught in UNRWA-run schools. UNRWA has flat-out refused to change its textbooks, and so the Biden administration has held the money in escrow, said Bedein.

“That’s a step in the right direction,” he emphasized. “It could be that the E.U. will copy the U.S. approach. So far, it hasn’t happened.”

IMPACT-se’s Sheff and Agassi, however, expressed confidence that the funds to the P.A. have been frozen, pointing to comments during the debate by Henrike Trautmann, the E.U. Commission’s director for the southern neighborhood at DG NEAR (Directorate-General for Neighborhood and Enlargement Negotiations), which they described as the first confirmation from the European Union that all funds had been frozen over the curriculum issue.