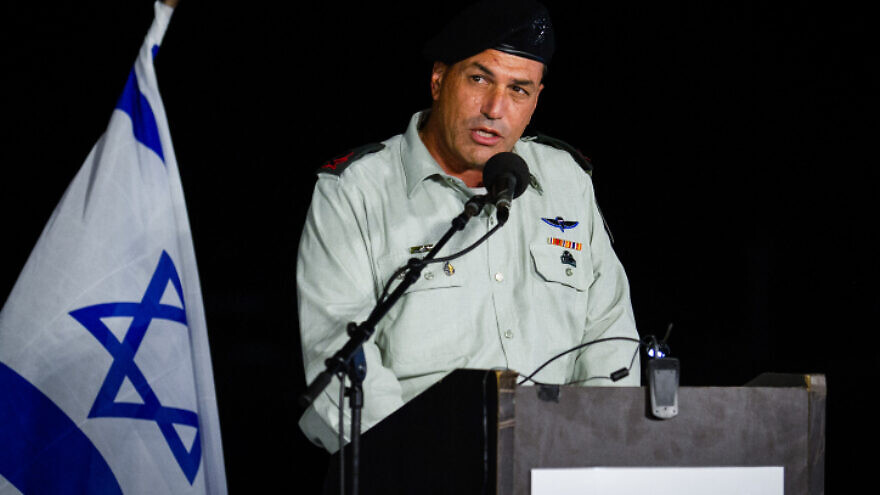 Speaking at the Israeli American Council National Summit in Hollywood, Florida, the former IDF deputy chief of staff said the world could not trust the Iranians. Iran would only stop its efforts to acquire a nuclear bomb if it were faced with a clear deterrent threat, he said. The United States has both the will and the ability to act, he said, and Israeli officials would prefer that the United States take the reins on the issue. However, if Washington does not act, “We have the ability to do it,” he said, adding, “I have seen the plans.”

Zamir further noted that Israel was operating in Syria much more than the public was aware of, with the goal of stopping Iran’s aspirations of expansion across the Middle East. Iran had hoped “to build a big force … like the model of Hezbollah in Lebanon, to build it in Syria,” he said. Israel had succeeded in preventing this so far, said Zamir, but “of course this is a long-term competition. We need to continue to do it.”

Meanwhile, Israeli Defense Minister Benny Gantz has informed senior U.S. officials that he has ordered IDF Chief of Staff Lt. Gen. Aviv Kochavi to make preparations for an attack on Iran’s nuclear infrastructure, according to a security official accompanying Gantz on a trip to Washington over the weekend.

The official added, however, that as far as capabilities were concerned, the United States would be better able to carry out such an attack.

“The Americans are both close and not so close to losing patience with Iran,” the official said. “They understand that Iran is not interested in reaching an agreement, but they aspire to maintain coordination with the international community, including Russia and China. Even if they have their fill of talks with Iran, they won’t go straight for a military option, but will [implement] a different series of pressures, and will begin to advance a military option.”

The official said there were differences in the two countries’ approaches to the Iranian threat.

“We are looking directly at targets. They have a broader perspective, with challenges from Russia and China. Nevertheless, they understand the lessons from Afghanistan and picked up signals from [Arab] Gulf states that have begun to engage in dialogue with Iran, and are reaching their conclusions,” the official said.

Despite the differences in approach, the official said security cooperation between Israel and the United States was expected to deepen in the near future.

In a meeting with U.S. Defense Secretary Lloyd Austin, U.S. Secretary of State Antony Blinken and think tank heads in Washington, Gantz revealed that Iran was building up its military forces in the west of the country to attack countries and forces in the Middle East, and Israel in particular.

Gantz told those in attendance that “in recent months, we revealed a few disturbing data on Iran’s aggressive actions in the region. First, I showed the world the [military] base in the city of Kashan, where Iran’s emissaries around the world are trained in operating explosive UAVs. Second, we revealed that Iran was carrying out explosive-laden UAV attacks from Iran itself. Among other things, attacks were carried out toward the maritime space through explosive UAVs from bases in Chabahar and the island of Qeshm in southern Iran.”

According to the defense minister, “Still today, there are Shahed 129-model advanced attack drones situated in these bases. Third, I showed that the explosive drones have further terrorist uses and in 2018, Iran tried to send a drone with TNT explosives from Syria apparently to terrorist organizations in Judea and Samaria.

“Now, I can also say that Iran is building its forces in the west of the state through the same means to attack countries and forces in the Middle East in general, and Israel in particular. We are prepared for any such attempt, and we will do everything necessary to defend our citizens and our assets.”

In the meeting, Gantz emphasized that Iran’s goal was to acquire regional and even global hegemony.

“I spoke over the last year with defense ministers from around the world, from South America to Africa. They are all concerned by Iran’s involvement through emissaries and terrorist organizations in terror in their regions,” he said.

“Gulf states and the entire region are under threat from Iran, and the attempt to acquire a nuclear weapon is in effect the attempt to deepen Iranian rule and intervention and to impose a radical ideology that will harm human rights and global stability. Iran is not strong today, and that is why we can act to stop it,” he added.

Addressing the IAC conference on Friday, Gantz said Iran presented a threat to Israel and to “our way of life,” referring to the United States and Israel.

“Israel is the only country in the world that has a country, Iran, seeking its destruction and building the means to do it. As Israel’s Defense Minister, I will never let it happen,” Gantz said.

“This is why the international community, with U.S. leadership, must stand together and act forcefully against Iran’s hegemonic aspirations and nuclear program and restore stability for the sake of global peace,” he added.

“Considering all these challenges and more,” Gantz said, “Israel has a moral, strategic, and operational obligation to maintain its military superiority, both in its operational capabilities and in its moral compass. Our operational and moral strength is not only for our defense. Only a strong, secure and moral Israel can extend its hand in peace. Only strong, secure and moral Israel can expand normalization with new partners and deepen relations with existing partners, from Jordan and Egypt, to Morocco, the UAE [United Arab Emirates], Bahrain and even our Palestinian neighbors,” he said.

Addressing the IAC conference on Thursday, Israeli Ambassador to the United Nations Gilad Erdan said the international community can find a “formula” for preventing a nuclear Iran. He said U.S. sanctions alone would not suffice because China and other major players have been finding ways to go around them or ignore them outright.

“What is this formula?” Erdan asked in an interview at the event. “The answer is quite clear: We should listen to the wise words of [U.S.] President [Theodore] Roosevelt, who used to say, ‘Speak softly, but also carry a big stick.’ The international community for many years spoke very softly to Iran. Sanctions are very important, but the sanctions are not enough.”

Iran, said Erdan, is on the verge of becoming a nuclear power. “And this is the time now to present the Iranian regime [with] a credible military threat that would force them to decide between their own survival as a regime and their nuclear ambitions. And I believe the answer will be clear; Iran will rush to the negotiating table once presented with a credible military threat.”

He said that Israel cannot rely on the international community, as the Islamic Republic poses a threat to its very existence.

“We are not going to wait until Iran becomes a nuclear threshold country,” he said. “We are leaving all options on the table, and we’re not going to hesitate. We will do whatever is needed.”