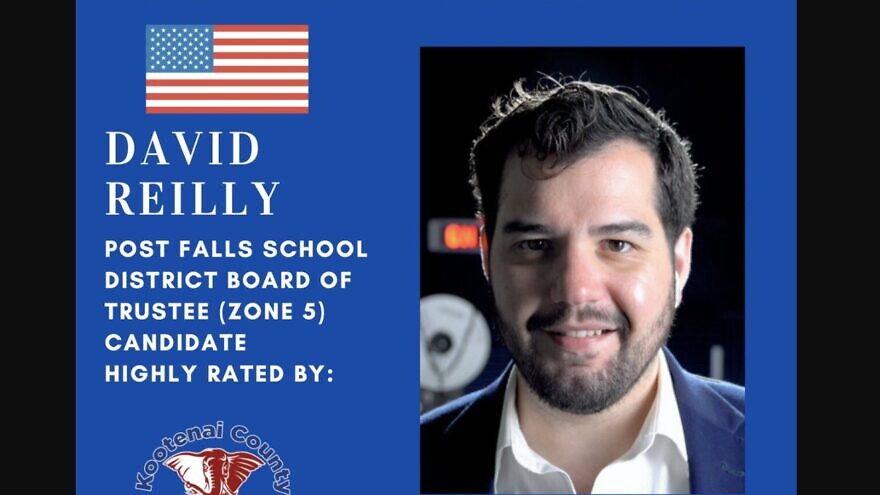 (October 19, 2021 / JNS) Pro-Israel Jewish and Christian organizations are drawing national attention to a school-board candidate in Idaho engaging in “blatant anti-Jewish bigotry” and encouraging violence; and as a result, have been urging the local and state Republican Party to repudiate him.

David Reilly, who is seeking a seat on the school board in Post Falls School District and has the support of the Kootenai County Republican Party, has claimed that “the Catholic Church has been infiltrated by homosexuals, Jews and bad leadership … ” and has, according to a report in The Daily Beast, tweeted that “all Jews are dangerous” and that “Judaism is the religion of anti-Christ.”

“This candidate has an undeniable record of promoting hate. Defending him sends the message that his bigotry is acceptable,” said Randy Kessler, executive director of StandWithUs Northwest. “We urge the KCRCC and Idaho Republican Party to condemn his comments and educate their members about why his bigotry against Jews is wrong.”

According to StandWithUs, Reilly’s past statements “typify the dangerous, age-old approach of scapegoating the Jews and blatantly encourage others to adopt anti-Jewish bigotry and even engage in outright violence. It is unthinkable that someone harboring these hateful views would hold any position of government authority, as he would hardly be expected to treat Jewish constituents as equal members of the district community.”

“Yet the KCRCC not only endorsed Reilly but defended him,” it said. “They have failed to condemn his anti-Semitic statements, and he has not apologized for them. He has deleted his tweets, however, indicating that he is aware of the problem.”

The Idaho Chapter of Christians United for Israel expressed opposition as well. Its director, Pastor David McGarrah, told the Coeur d’Alene/Post Fall Press, in a statement that “Mr. Reilly is an anti-Semite who has no business being involved in children’s education. He has repeatedly made horrific statements concerning our Jewish brothers and sisters, and should be condemned by all people of conscience, including and especially the Kootenai County GOP and the Idaho Republican Party.”

Meanwhile, Reilly posted on Facebook a source of Jewish support. “I am grateful to announce that Alan Golub, the son of a Holocaust survivor, has endorsed my campaign for Post Falls School Board.”

Reilly said “Alan understands that the fight for the soul of our nation begins in our schools. He understands how critical it is that informed parents take control of the curriculum and protect our kids from the dangerous progressive policies of the left—policies like critical race theory—which lead to the demonization of entire groups of people on account of the color of their skins or their ethnic heritage, which both Alan and I stand opposed to.”

According to Idaho’s KXLY.com, critical race theory is not taught in North Idaho schools.

In a statement to KXLY, a spokesperson for Reilly said “we’re referring anybody that’s critical of David personally to his platform; let them decide for themselves whether or not it’s a platform they agree with.”