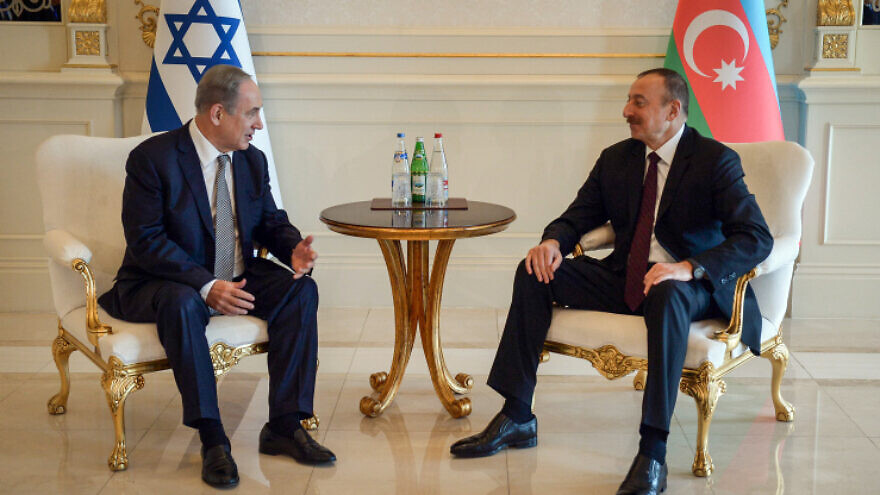 (October 14, 2020 / JNS) Over the last several weeks, Armenia and Azerbaijan have been engaged in an escalating conflict centered around a decades-long dispute over the Nagorno-Karabakh region, which is internationally recognized as Azerbaijani territory but has illegally occupied by Armenia since their first war ended in 1994.

While this conflict seemingly revolves around a dispute between two small Caucasus countries, it has larger regional and even global implications.

While the conflict in the Caucasus does not directly threaten Israel, its long-standing close ties with Azerbaijan and fledgling relations with Armenia—coupled with the larger geopolitical landscape of the region involving heavyweights Turkey, Russia and Iran—put the Jewish state on high alert for developments.

“Israel and Azerbaijan maintain a strategic alliance. It is not just about arms sales or oil, but a very deep strategic cooperation,” Brenda Shaffer, a senior fellow at the Atlantic Council’s Global Energy Center, told JNS.

She said that “Azerbaijan, despite bordering Iran, was not afraid to openly cooperate with Israel over the years. This showed other Muslim majority states that they can, without worrying about repercussions from Iran or other states, establish open cooperation with Israel.”

On Sept. 10, Armenia and Azerbaijan signed a Russian-brokered truce stipulating that a cease-fire should eventually led to a deal on settling the conflict.

However, in the days following the ceasefire, renewed clashes have taken place with both sides blaming the other for continued attacks in violating of the agreement.

On Tuesday, U.S. Secretary of State Mike Pompeo urged both sides to implement the ceasefire.

“We deplore the loss of human life and remain committed to a peaceful settlement,” said Pompeo.

Indeed, as the fighting intensified in recent weeks, Israel has come under fire for its close military ties with Azerbaijan. Social-media video emerged in early October showing Israeli-made LORA short-range ballistic missiles being used by Azerbaijani forces against Armenia military targets. Similarly, Azerbaijani officials have confirmed the use of Israeli-made drones as well.

The use of Israeli-made weapons against Armenia, which also has diplomatic relations with Jerusalem, has led to a diplomatic row between the two countries after Armenia recalled its ambassador to Israel over the arms sales in early October.

Similarly, the head of the self-declared Artsakh Republic, which is the Armenian-backed illegal government of Nagorno-Karabakh region, accused Israel of being complicit in Azerbaijan’s “genocidal” war.

At the same time, Israel’s Supreme Court also rejected a petition to ban arms sales to Azerbaijan, saying there was a lack of evidence that Israeli-made weapons were being used for war crimes against Armenia.

“Israel has friendly ties with the Armenian people and is home to a vibrant Armenian community. On strategic issues, however, the two states are on different sides. Armenia has close cooperation with Iran, and much of the military supplies to Armenia today transit Iranian territory,” said Shaffer.

“In the grand scheme of things, the longer the conflict is on high flames, the greater the chance Israel will be confronted by other countries.”

Azerbaijani Ambassador to the United States Elin Suleymanov accused Armenia of attempting to cause a wider confrontation by drawing in international players such as Turkey, Russia and Israel. “Azerbaijan and Israel have a very wide-ranging relationship. It’s very comprehensive and by far not limited to military cooperation, although security and defense is, of course, an important factor in these ties,” he told JNS.

“Azerbaijan is a country that is under attack and an illegal occupation, so it’s natural that Azerbaijan buys military equipment for self-defense,” continued Suleymanov. “We buy from many countries, including Russia, Turkey and Israel. The Armenian side exaggerates this issue and focuses on Israel so much in order to exert pressure on public opinion.”

Instead, Suleymanov noted that Azerbaijan is being attacked from its own territory by an illegal occupying force.

“It is fundamentally important to understand that all fighting today is taking place within the internationally recognized territories of Azerbaijan. An Armenian army is illegally inside the territory of Azerbaijan, killing and bombing our civilians,” he told JNS. “Azerbaijan has repeatedly stated that we have no military objectives on territories of Armenia and we do not plan to attack Armenia.”

Indeed, both Armenia and Azerbaijan are former Soviet Republics, regaining their independence following the collapse of the Soviet Union in the early 1990s. Since then they have been stuck in an unresolved conflict over the Nagorno-Karabakh region, which is internationally recognized as part of Azerbaijan, but now controlled and occupied by ethnic Armenians.

The current round of fighting between is the second stage of fighting that began last July. During the summer conflict, Armenia attacked Azerbaijani towns along their international border, about 300 kilometers north of where the current fighting is taking place.

“Azerbaijan is now showing Armenia that there are costs and risks in its attacks.”

During the July flare-up, Armenia sought to undermine the security of the energy corridor. That area is also close to several strategic oil pipelines running from the Caspian Sea to the Black Sea and the Mediterranean, which also supply some 40 percent of Israel’s oil. In addition to oil, that area also hosts the Southern Gas Corridor, which is a new pipeline that will supply natural gas to Europe.

“Moscow is likely to have supported Armenia’s attacks in July on Azerbaijan in close proximity to the energy corridor,” said Shaffer, adding that it was done to “to signal to Azerbaijan not to attempt to threaten its gas markets in Europe.”

Additionally, Armenian Defense Minister Davit Tonoyan has also pushed a new military doctrine with the aim to control all of its occupied territories, termed “New Wars for New Territories,” which indicated that Azerbaijan needed to fear it could lose even more territories if it sought to take its territories back.

“The current round of fighting is connected to the July phase. Azerbaijan is now showing Armenia that there are costs and risks in its attacks on Azerbaijan as well,” said Shaffer.

While the Armenian-occupied Nagorno-Karabakh region is at the center of the dispute between the two countries, Shaffer noted that most of the current fighting is actually taking place in seven additional districts occupied by Armenia during the war back in the early 1990s.

‘A challenge for Tehran’

While it’s unlikely that Israel would be pulled into the conflict in any capacity, the Jewish state’s support for Azerbaijan could harm its relations with other allies, such as Cyprus and Greece.

“Israel and Azerbaijan maintain a strategic alliance. It is not just about arms sales or oil.”

“Israel will be criticized by Western countries for providing the Azeris with drones, which have been massacring Armenian targets, and by her close Hellenic allies for taking a side with Turkey (a longtime rival of the Cypriots and Greeks) and against Armenia (having strong political, cultural and religious ties with Greece),” Benjamin Weil, director of the project for Israel’s National Security at the Endowment for Middle East Truth, told JNS.

“In the grand scheme of things, the longer the conflict is on high flames, the greater the chance Israel will be confronted by other countries,” he said.

Nevertheless, the conflict in the Caucasus could also create a new front in the ongoing tensions between Israel and Iran.

Iran, which shares a border with Azerbaijan and is also home to a large population of Azeris, has strong ties with Armenia.

“[Armenian] Prime Minister [Nikol] Pashinyan, during his visit last year to Iran, offered for Armenia to serve as a transit state for Iranian gas to Europe. Armenia has a military unit in Syria that operates under the Russian forces there,” said Shaffer.

Additionally, Russia, which does not share a border with Armenia, is supplying the country with weapons via Iran.

“Tehran’s support for Armenia and its occupation of Azerbaijani incenses many members of the Azerbaijani community in Iran, and this could create a challenge for Tehran,” said Shaffer.

As a result, many Iranian Azeris, wh0 estimates suggest may comprise up to a quarter or even a third of Iran’s population, have been demonstrating against Iran’s support for Armenia, chanting “Death to Armenia” at rallies and expressing solidarity with Azerbaijan’s situation.

“Israel’s close cooperation with Azerbaijan seems to be building appreciation domestically in Iran itself for Israel,” said Shaffer. “Accordingly, many ethnic Azerbaijanis in Iran are writing on social-media positive posts on Israel’s support for Azerbaijan.”