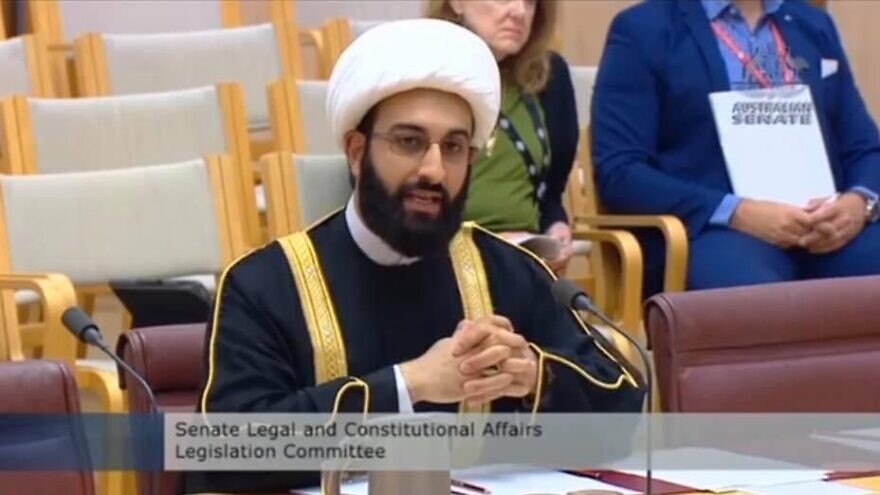 Physically attacked for his positions and forced to flee his home in Australia when it was vandalized by extremists, it is perhaps no wonder he began the preface to his 2018 book, “The Tragedy of Islam: Admissions of a Muslim Imam,” with the words: “It is highly likely that you will one day hear that I have been murdered.”

Tawhidi, who describes himself as the “Imam of Peace,” has said “Palestine is Jewish land” and that he doesn’t believe in Islamophobia as “phobia is an irrational fear. Fearing ISIS is not irrational.” He has criticized Reps. Rashida Tlaib (D-Mich.) and Ilhan Omar (D-Minn.) as “absolute frauds and Islamists” who “promote hatred against the Jewish people.”

He is “a passionate defender” of the Jews—“Now I take antisemitism personally.” In 2019, he visited Auschwitz “to take a stand against antisemitism.”

Tawhidi was born in Qom, a holy Shia city in Iran. He went through his own journey into fundamentalism and back. The groundwork for that fundamentalism was laid at a private Muslim school in Australia, where he moved with his family at age 12. When he returned to Iran in 2007 to complete his Islamic studies, he became still more radicalized.

“Due to my Australian citizenship, I was seen as an asset….I became a close ally, travel partner and adviser to officials within the Iranian regime.

“I was completely radicalized, and willing to kill anyone who spoke a single word against [Iran’s Supreme Leader] Ali Khamenei, whom I saw as the link between myself and God,” Tawhidi said.

However, it was also as a student in Iran that he first became aware of the Islamic regime’s corruption, particularly the way female students were preyed upon. He saw that students could engage in highly immoral behavior just so long as they were loyal to the regime.

A chance encounter in Qom led him to meet a religious leader opposed to Khamenei, eventually causing him to switch sides ideologically. At an Iranian university, he became a well-known critic of the regime, openly disagreeing on political matters with teachers.

Tawhidi says his de-radicalization was a two-stage process. First, he distanced himself from the Iranian regime, a phase that took place in 2010-2012, but still remained a “fundamentalist Islamist.” The second stage involved freeing his mind from fundamentalist ideas, a process he describes as a “period of gradual, slow and quiet change.”

Tawhidi was elected this year to the Global Imams Council, the “world’s first and largest international nongovernmental body of Muslim religious leaders,” which focuses on combatting extremism and promoting coexistence between religious groups.

Q: Why is antisemitism embraced by so many Muslims?

Tawhidi: It’s not ‘embraced’ in the European sense of the term; you know, some European politician comes up with an idea against Jews, and then it becomes ‘embraced.’ Antisemitism is the core of Islamists’ belief. Fundamentalists believe the only reason why Islam exists is because Jews changed God’s message; therefore, God had to send a new religion. God had to send Jesus and because Jews killed prophets, then God had to send Muhammad. And here’s the point—walking away from it becomes very difficult.

Q: There is a parallel in Europe to what you’re describing, which is the role of the Church in antisemitism. And they succeeded in bringing about reform.

A: It’s very close, but it won’t happen in Islam. Islam is not like the Catholic Church where there’s a pope and he’s responsible for everything, the good and the bad. If a priest is doing something wrong in a church, you know who to blame. It’s the pope, it’s the Vatican. In Islam, there’s no such thing. There is no one authority that you can point to and say, ‘These are the ones responsible.’ We are over 70 schools of thought all stemming from two main denominations, the Sunni and the Shia, and you just have to hope for the most influential of these religious leaders to come forward and oppose terrorism.

Q: If antisemitism is at the core of Islamist belief, how do you reform, or expunge, it?

A: Expunge is the perfect word. Reform is not. Reform suggests something that is good but needs to be changed in order to fit in with the current life and times of the group, whether it be Judaism or Christianity or Islam. You cannot reform something that is not supposed to be there.

The Islam of the regime in Iran is 100% antisemitic in its core ideology. It is in their very belief system. Khamenei and [founder of the Islamic Republic Ayatollah Ruhollah] Khomeini and Hezbollah and Hamas, Sunni or Shia Islamists, all of them unite against Jews.

Q: What effect is the Abraham Accords having on people in Muslim countries? Is it influencing them from a theological perspective?

A: Here is where the challenge is: It is seen as a political decision. And politics is dirty and therefore the Islamist extremists say, “See, it’s so dirty, you can even be friends with a Jew. You can even normalize with Israel.” That’s where my job comes in. As religious leaders—myself, rabbis, bishops—we have to give religious legitimacy to the Abraham Accords and say, “No, befriending Jews is not against my God. It is definitely what God wants.”

Q: Are you enjoying success in that respect?

Q: You tweeted that “Islamist extremists are banned from operating in Saudi Arabia and the UAE but they are legally registered and have bank accounts in Europe and the USA.” What is the West doing wrong in its handling of Muslim extremists in comparison to Middle East countries?

A: The extremists don’t think in four-year terms. The politicians and the policymakers in the West do think in four-year terms because that’s their term limit. So the moment they’re in office, what do they do? They start planning in four-year terms. If they get in office in 2020, and you talk to them about anything from 2024 onwards, they don’t care about it because they’re not sure that they’re going to make it to a second round. So in the first term, they’re working hard to secure a second term, or they’re just focusing on the first term. Now with this mentality, you cannot really put in place serious, long-term steps against extremism. It is practically impossible. This is why the extremists are always winning. And if they’re not winning in their terrorism, they’re winning in other fields. So you see they have this advantage.

Whereas in the Middle East, [Saudi Crown Prince] Mohammed bin Salman doesn’t think about four years. He’s there until he dies. He’s the next king. He wants the Muslim Brotherhood banned? It’s banned immediately. Here in the UAE, it’s a terrorist-designated organization. Yet it’s operating in Washington, D.C. This is the difference.

Q: How would you characterize a group like CAIR—the Council on American-Islamic Relations?

Q: Do groups like CAIR accurately reflect Muslim attitudes in the U.S.?

A: No, let me tell you something about CAIR. CAIR cannot really go into any mosque—not just CAIR, but Ilhan Omar and Rashida Tlaib and this entire cult. They’re not accepted. They have their own mosques, two or three. They have their own offices. And then they have their own events. And they have a lot of media around it. But Ilhan was booed at a Somali event in her own city. Her own people booed her offstage. These people, they don’t represent the Muslim world accurately in America.

A: I see a developing region that requires a lot of patience. It has great potential. But usually the corrupt ones are supported and become empowered.