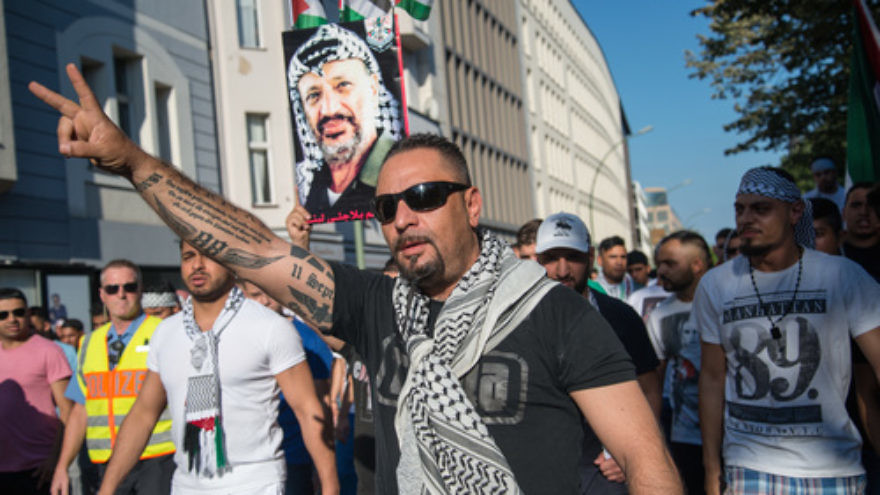 While Germany takes pride in confronting its Holocaust past and maintaining a strong relationship with Israel, the European nation’s recent influx of more than a million Middle East migrants—many originating in countries like Syria and Iraq, which have deeply rooted anti-Israel and anti-Semitic cultures—has generated fear among German Jews that the refugees will undermine their safety.

In October, an official German state intelligence document leaked to the German weekly newspaper Welt am Sonntag warned that the mass migration could conflict with modern German values and lead to “instability in our land.”

“We are importing Islamic extremism, Arab anti-Semitism, national and ethnic conflicts of other peoples as well as a different societal and legal understanding,” the document said.

After the events in the German city of Cologne over New Year’s Eve, when hundreds of women accused migrants of sexually assaulting them, more Germans have grown skeptical about the Mideast refugee situation. A poll released Jan. 15 by public broadcaster ZDF found that 60 percent of Germans doubt the country’s ability to cope with the refugee influx. Meanwhile, German Chancellor Angela Merkel has faced growing backlash from the public and members of her own Christian Democratic Union political party, which recently pledged to “tangibly reduce the number of refugees arriving.”

This anxiety has been expressed by some prominent German Jewish leaders, who fear that the migrants will bring anti-Semitism from their home countries. Jutta Wagemann, a spokesperson for the Central Council of Jews in Germany, told JNS.org “there are concerns in the Jewish community about the anti-Semitism of the Middle East refugees.”

In a joint op-ed with World Jewish Congress President Ronald S. Lauder, the Central Council’s president, Josef Schuster, wrote in September that “huge numbers of refugees are of course a big challenge for Europe.”

“It is also important that those who at present can’t return to their home countries will become familiar with our Western values. In Germany, that means respect for the values enshrined in the Constitution and also an acceptance that support for Israel is part of the political DNA of this country. Moreover, society by and large agrees that the Holocaust must be remembered,” they wrote.

This sentiment was shared with Merkel during an October meeting between the Central Council and the leadership of Merkel’s Christian Democratic Union party.

“Many refugees come from countries where Israel is an enemy; this resentment is often transferred to Jews in general,” the Jewish leaders warned.

More recently, prominent German Jewish leaders have been outspoken in expressing their growing fears of the refugee influx, Islamic extremism, and attacks by far-right pro-Nazi extremists.

“No, we are no longer safe here,” said Daniel Killy, leader of the Jewish community in Hamburg, Germany, citing the disintegration of state power, the excesses of the far right, the loss of political credibility, and “the terrible fear of naming Islamism as such” as contributing to an insecure environment for Jews, the German news outlet Tagesshcau.de reported.

Salomon Korn, president of Germany’s Frankfurt Jewish community, said that most of the new arrivals come from countries that do not enjoy an “enlightened” version of Islam, the German daily newspaper The Local reported.

“Many of the refugees had grown up in environments rife with anti-Semitism and a belief in Muslims’ mission to spread their religion,” Korn said.

Despite their fears, Jewish groups have also been at the forefront of helping refugees settle in Germany.

“Many individuals and official representatives of many local communities as well as the Central Council for Jews in Germany and the Central Jewish Social Organization have extended their hands to the newly incoming refugees, have participated in welfare work, and for example explicitly visited refugee homes,” Stefanie Schüler-Springorum, head of the Berlin-based Center for Anti-Semitism Research, told JNS.org.

“At the same time, many voiced their fear of ‘imported anti-Semitism,’ albeit again in a large variety of tones,” Schüler-Springorum added.

Many of Germany’s Jews were refugees themselves, fleeing the former Soviet Union during the latter half of the 20th century. The fact that many Jews chose Germany as their new home was a testament to the country’s post-war efforts in confronting its own dark history of anti-Semitism.

Yet Benjamin Weinthal, a Berlin-based fellow for the Foundation for Defense of Democracies think tank, believes that the “challenges are enormous” for Germany, given the fact that the country has had a growing presence of Islamic extremists. According to Weinthal, Germany is also home to 950 active Hezbollah members, 300 Hamas members, and a powerful radical Salafist movement with 7,000 radical Sunni Muslims.

“The Salafists in Germany export fighters to ISIS (Islamic State) and Al-Qaeda in the Syrian and Iraqi war theaters. Many have returned to Germany with combat experience,” Weinthal told JNS.org. “When you factor in Germany’s support for a BDS (Boycott, Divestment and Sanctions movement) measure—EU product labeling [of Israeli settlement products]—with the hotbed of jihadism in the country, one can see why Germany has no real political will to tackle the anti-Semitism of many of the refugees and immigrants from Muslim-majority countries.”

The summer of 2014 can be seen as a watershed moment in modern anti-Semitism in Germany, with a number of protests against Israel’s Operation Protective Edge in Gaza leading to an increase in anti-Semitic sentiments and attacks on Jews. At the time, reports indicated that anti-Israel protesters were heard shouting “Gas the Jews,” while a video of a radical Berlin imam shows him telling his followers to “kill them (Jews) to the very last one.”

Regarding Germany’s challenge of integrating more than a million migrants, Schüler-Springorum believes that it is possible “with time, money, and the political will to [meet the challenge], even in face of negative events like [New Year’s Eve] in Cologne.”

Schüler-Springorum cited the historic precedent of Germany’s success in dealing with its anti-Semitic past as providing hope that Germany can successfully educate and integrate the current Mideast refugees.

“As my colleague Michael Brenner wrote some weeks ago: Where, if not in Germany, with its achievements in dealing with our own anti-Semitic past—due especially to many grassroots organizations, civil society initiatives, and NGOs—can this be expected to be successful? Not tomorrow, of course, but hopefully in the non-too distant future,” Schüler-Springorum said.

But despite Germany’s success in overcoming its Holocaust past, Weinthal argues that the country has “failed to internalize that modern anti-Semitism—hatred of the Jewish state and the delegitimization of Israel via product labels, for example—is the main problem.”

As such, Weinthal believes that many German Jews will seek aliyah as a viable option, much like their counterparts in France who are moving to Israel in droves, especially after the Islamist terror attacks in Paris last January and November. In 2015, about 200 German Jews made aliyah.

“The threat to the safety of German Jews will continue,” Weinthal said. “Aliyah as an escape hatch for German Jews will be the natural result of Germany’s failure to protect its small Jewish community and stop modern anti-Semitism.”