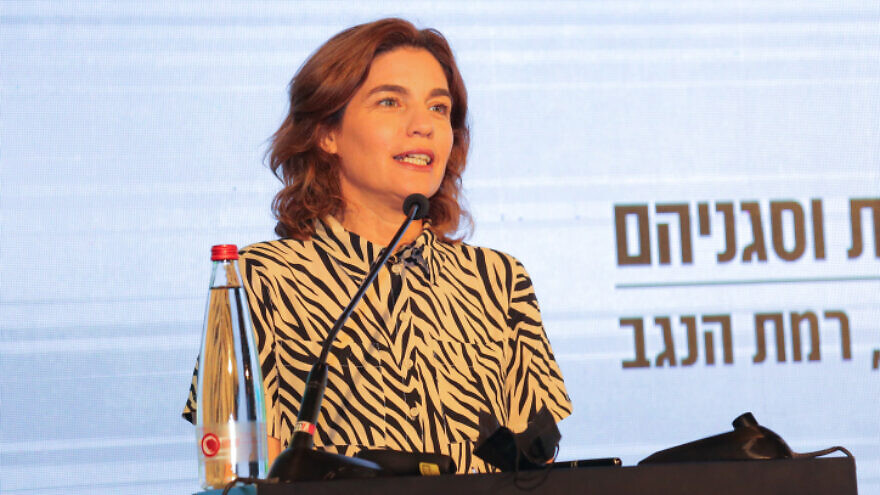 (August 26, 2021 / JNS) Israel’s government unanimously agreed on July 25 to adopt a low-carbon economy, “part of its commitment to the global effort” to reduce greenhouse gases. It’s the first time that Israel has set a national goal to reduce carbon emissions. In doing so, it joins a host of countries that have made similar announcements over the last several years.

Some praise the plan, saying Israel must act as the “science is in,” and the world faces an imminent global climate crisis. Others scoff at the “so-called science” and say there’s no justification for overhauling Israel’s economy—that it will be “all pain, no gain.”

The plan calls for an 85 percent reduction in carbon emissions from 2015 levels by 2050 and sets an intermediate goal of a 27 percent reduction by 2030. To hit those targets, it calls for major changes to the transportation, manufacturing and energy sectors.

There already appears to be disagreement within the Ministry of Environmental Protection about the plan. As presented on the ministry’s website, the plan calls for natural gas to play an integral role. Natural gas has led to a “dramatic decline in local pollutant emissions,” it said. “Thanks to these measures, Israel already meets about 75 percent of the target required for reducing CO2 emissions within the framework of its obligations under the Paris Agreements.”

Yet the ministry’s head, Tamar Zandberg, criticized natural gas on June 29 during a climate change panel at an Israel Democracy Institute conference. “I want to correct a common mistake … natural gas is as natural as coal. It is fossil fuel,” she said, according to Israel Hayom.

Israel’s timing was meant to coincide with a new report by the U.N.’s Intergovernmental Panel on Climate Change (IPCC), which will underpin the upcoming U.N. Climate Change Conference in Glasgow in November, where participating countries will likely undertake to curb their emissions more sharply.

“It was to show support of the IPCC and the U.N. in general and to say that we are concerned with climate change,” Gideon Behar, special envoy for climate change and sustainability at Israel’s Ministry of Foreign Affairs, told JNS.

The first installment of the IPCC’s Sixth Annual Assessment Report, released on Aug. 9, lays the blame for global warming squarely on man-made emissions and for the first time (on the basis of what it says are improved models) links extreme weather to climate change.

“The evidence is clear that carbon dioxide (CO2) is the main driver of climate change,” the IPCC said in a press release about the report, painting a bleak future for the planet if global warming rises above pre-industrial levels by two degrees Celsius (3.6 degrees Fahrenheit).

While stating that “the climate crisis demands from us immense changes to our lifestyle, to our economy,” Behar said he sees opportunities for Israeli technology. “Know-how and technologies are very much needed. Israel is outstanding in its experience and capacity in the field of climate innovation,” he said, noting Israeli advances in areas such as water conservation and desalinization, innovative energy technologies and alternative proteins, which could free up land areas currently devoted to raising livestock.

Behar said no one should question climate change: “There’s no place for doubt anymore. We need to move forward and if skeptics need more examples, they should look at the huge firestorms in Siberia, Greece, Turkey.”

Pinhas Alpert, professor emeritus in atmospheric sciences in the department of Geophysics at Tel Aviv University, told JNS that climate change is the greatest threat humans are facing. For him, the most dramatic evidence is his own research showing the Fertile Crescent has been drying up over the last 20 years. He also cited his 2002 study of extreme daily precipitation over the Mediterranean Sea.

Alpert says that, if anything, Israel did not go far enough given other developed countries have adopted 100 percent carbon reductions versus Israel’s 85 percent.

Nevertheless, questions are being raised about the conclusions of the latest IPCC report, as well as the wisdom of Israel’s transitioning to a carbon-free economy.

Richard Lindzen, a leading atmospheric physicist and professor emeritus of meteorology at the Massachusetts Institute of Technology (MIT), has been fighting the scientific establishment on climate change for 30 years.

When asked his opinion of Israeli solutions to climate change, Lindzen said: “Solution implies there is a problem.” The real question is if the plan’s worth doing. To that, he replied: “Not at all.”

“Demonizing carbon dioxide is just crazy,” said Lindzen. “It means we have a population that’s forgotten elementary biology. They don’t remember photosynthesis. We’ve already benefited due to the increase in CO2 by probably over a trillion dollars increase in agricultural productivity. The earth is greening due to this.”

“If you were to believe the worst scenarios of the IPCC,” it still wouldn’t matter what Israel did, he said, referring to Israel’s tiny carbon footprint when compared to major polluters like China, the United States and European Union.

According to the reference website Our World in Data, Israel accounted for only a 0.17 percent share of global emissions in 2017, the latest year data is available.

Lindzen dismissed the new IPCC report. (He was a lead author on the third one.) “What people focus on is the ‘Summary for Policymakers,’ which is about 40 pages vs. the 3,500-page full report. He said politicians write the summary and “count on the fact that people won’t read the report. It doesn’t even have an index. But if you read the report, you realize it doesn’t say what the summary says.”

He pointed to recent tweets from Roger Pielke Jr., professor of environmental studies at the University of Colorado who has gone through the full report, finding comments like, “No likelihood is attached to the scenarios assessed in this report,” and “The socio-economic assumptions and the feasibility or likelihood of individual scenarios is not part of the assessment.” (Lindzen likened this to what lawyers call plausible deniability.)

Pielke also found that “the scenarios IPCC admits are unlikely dominate the report” with the most extreme climate scenarios getting the most mentions (53 percent).

Lindzen argued that the field of climate science was politicized when it became flush with government funding in the 1990s. “Until then, it was a tiny field. In 1990, no one at MIT called themselves a climate scientist. You were a meteorologist, a geochemist, an oceanographer. Within those disciplines you had an interest in climate. Now they’re all climate scientists.”

‘We have to pay the price of more expensive energy’

Nir Shaviv, a professor of physics at Hebrew University, told JNS that he feels many climate scientists are under pressure to produce alarming reports.

There is “such a large climate industry that people need to publish things that show a large effect [from man-made emissions], or they don’t get grants,” he explained.

Asked by JNS about the feasibility of Israel’s carbon reduction plan, Shaviv said: “These kinds of things are feasible if they’re willing to pay the price. Obviously, you can fill the Negev Desert with photovoltaic cells if you want. But is it the smart thing to do? I think the answer is no.”

He noted the high energy prices in Europe, whose economy is just emerging from a decade of stagnation. “Industries are leaving Europe because they can’t afford the price of energy and manpower. They always had the problem with expensive manpower. They now have energy price problems.”

Bloomberg reported on Aug. 5 that “in Europe, utilities pay near-record prices to buy the pollution permits they need to keep producing power from fossil fuels.”

Israel announced on Aug. 2 that it, too, will adopt a carbon tax that will go into effect in 2023. Paid by consumers, it’s meant to act as a brake on fuel consumption. “The step we are taking today is historic and aligns with the developed countries struggling with the climate crisis,” said Finance Minister Avigdor Lieberman.

He said that most ignore a solution that is staring the world in the face. “If global warming was a serious problem—and it isn’t—but even if it was, there’s a clear solution which you can adopt which is cheap and can supply all the energy requirements, it’s stable, it’s everything you want, and it’s called nuclear,” he said.

If he could give advice to Israel’s government, he would say “concentrate on real environmental issues,” like smog in the Tel Aviv area. “There are a lot of things in the here and now as opposed to something which is mostly extremely exaggerated.”

Lindzen agreed. His advice to Israel? “Ignore the climate crisis. Israel’s already an outlier. Let the rest of the world commit [economic] suicide.”