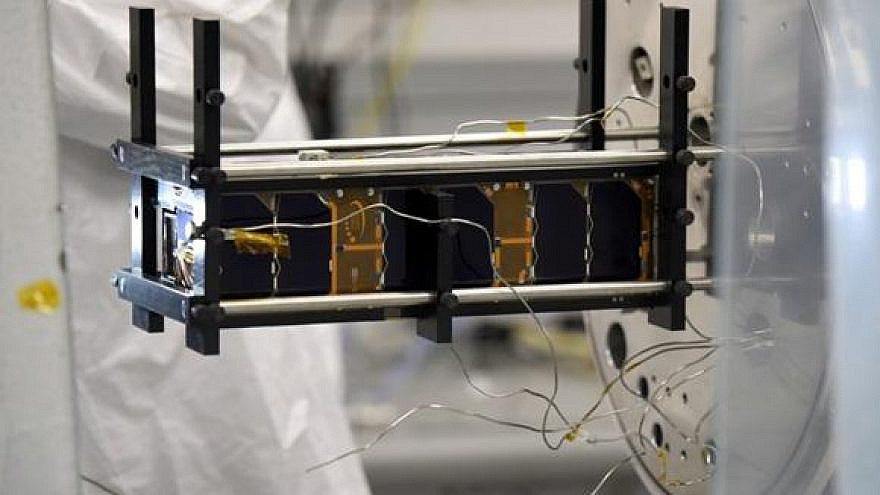 The TAU-SAT1 nanosatellite, which is approximately the size of a shoebox and weighs less than six pounds. Credit: Tel Aviv University.
Spread the word.
Help JNS grow!
Share now:

(February 18, 2021 / JNS) A nanosatellite from Tel Aviv University will begin its travel to the International Space Station when it is launched from Wallops Island, Va., on a NASA resupply spacecraft on Saturday.

The TAU-SAT1 nanosatellite, which is approximately the size of a shoebox and weighs less than six pounds, is the first to be wholly designed, developed, assembled and tested independently in an Israeli university by researchers and students. The NASA rocket will dock with ISS and astronauts will release the nanosatellite into orbit. It is expected to be active for several months.

TAU-SAT1 was created at the university’s Center for Nanosatellites, an interdisciplinary endeavor between the Iby and Aladar Fleischman Faculty of Engineering, the Porter School of the Environment and Earth Sciences, and the Soreq Nuclear Research Center. It was completed about four months ago and sent for pre-flight testing to the Japanese space agency JAXA.

“It’s a big day for TAU,” said Professor Colin Price, head of the Porter School. “We have now joined the ‘Civil Space Revolution’ called New Space, in which, unlike the Old Space, not only giant companies with huge budgets and large teams of engineers can build and launch satellites.”

Data collected by TAU-SAT1 will be extracted using a satellite station built on the roof of the university’s engineering building, said Dr. Ofer Amrani, head of TAU’s Miniature Satellite Lab.

The launch will be broadcast publicly and available for livestreaming beginning at 11:45 a.m. Eastern Standard Time on Feb. 20, preceded by a panel discussion about the satellite.