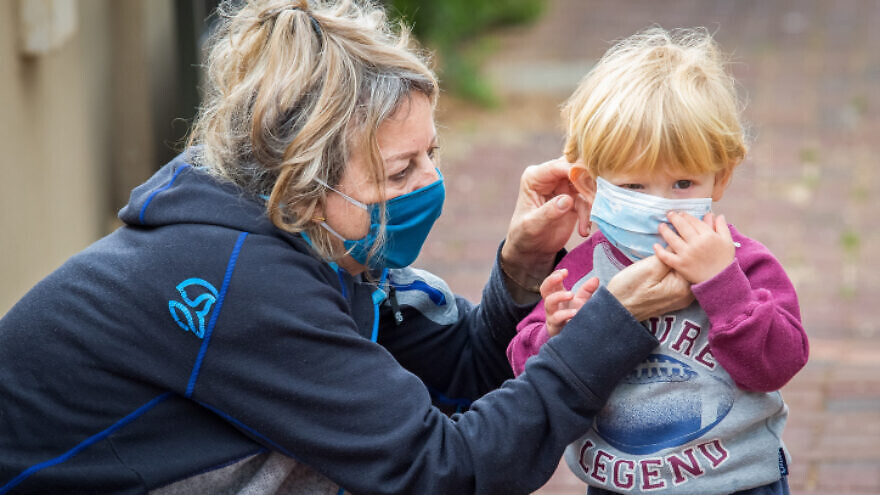 A toddler visits his grandmother at her home in Haniel, a moshav in central Israel, on April 5, 2020. Photo by Chen Leopold/Flash90.
Spread the word.
Help JNS grow!
Share now:

(May 6, 2020 / JNS) Parents across Israel are preparing to send their toddlers back to government-supervised day-care facilities next week, after health officials deemed it sufficiently safe and financial compensation packages were reached between the government and daycare providers.

Schools and childcare facilities were among the first institutions to shut down in mid-March due to COVID-19. Starting next Sunday—approximately eight weeks since they were sent home—children in day care will be divided into groups of up to 17 per classroom, including multi-age groups to enable the maximum number of children to be allowed to return.

However, due to Health Ministry regulations and space limitations, not all facilities may be legally permitted to take back all enrolled children. According to Channel 13 News, as many as 30 percent of children may have to remain at home.

The government will be responsible for bearing the financial brunt, according to the agreement between day-care umbrella organizations, the Treasury and the Labor, Social Affairs and Social Services Ministry.

Children ages 3 to 6 are also expected to return to preschools and kindergartens on Sunday, attending on alternating days for three days a week so that a classroom limit of 18 children at a time can be maintained. Afternoon programs, which normally enable parents to work later during the day, will not be running yet, so the school day will end at 2 p.m.

As of Wednesday, no agreement had been reached with private preschools and kindergartens, which are slated to remain closed. Organization of Private Nurseries and Kindergartens head Dr. Shulamit Bismanovsky said infants and toddlers in private care could not reasonably be expected to maintain social-distancing practices, nor could caregivers distance themselves from the children.

School children in first through third grades, and those in 11th and 12th returned to school at the beginning of the week, divided into smaller classes and subject to a host of restrictions.

On Monday, Israeli Prime Minister Benjamin Netanyahu said that all students are scheduled to return to classrooms by the end of the month, with universities and colleges reopening on June 14. However, they may have to attend school on alternate days or take some of their classes online due to social-distancing regulations.