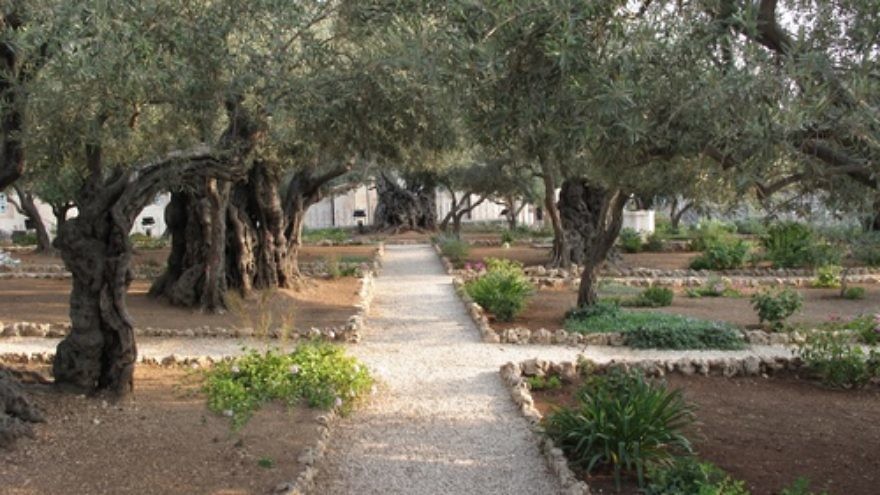 In Jerusalem, trees producing the olives of Gethsemane are set in the small grove pictured here. The grove is revered by Christians because of its connection to Jesus. Credit: Juandev via Wikimedia Commons.
Republish this article
790 WORDS
Spread the word.
Help JNS grow!
Share now:

(December 12, 2013 / JNS) In 2013, the Society for the Protection of Nature in Israel (SPNI) published a survey of mature trees in Jerusalem that was “the most comprehensive of the recent SPNI surveys, including some 4,000 trees,” according to the society’s marketing and communications coordinator, Danielle Berkowitz.

Many of the trees identified through such surveys have rich histories and stories attached to them. In fact, hundreds of trees throughout the Jewish state illuminate fascinating aspects of Israeli history and culture. Ahead of Tu B’Shevat, the Jewish Arbor Day, JNS.org presents a small sampling of those trees.

Behind a high-stone wall, just outside the Old City walls, stand some of the most famous trees in Jerusalem, if not the entire country. These trees, producing the olives of Gethsemane, are set in a small grove revered by Christians because of its connection to Jesus.

In 2012, the National Research Council of Italy, along with researchers from several Italian universities, investigated the eight trees at the site. Samples of wood were taken from several of the trees and carbon-dated to 1092, 1166, and 1198. That would make the trees at least 900 years old—ancient by any standard!

It is possible that the trees could be even older. Olives will readily sprout from the roots, so if the top growth of the trees was cut down or died at some point in time, then their true age may not be accurately reflected.

The Lone Oak in Gush Etzion, located halfway between Jerusalem and Hebron, has served as an area landmark for more than 600 years. After the 1948 War of Independence, it became a symbol of Jewish return to the land.

Today, Gush Etzion is a collection of kibbutzim, moshavim, and villages with more than 70,000 residents. Though the land was purchased in the 1920s, the first successful settlements there started in the early and mid-1940s. By 1947, the total population was 450 people.

On November 29, 1947, life at Gush Etzion changed forever. On this date, the United Nations voted on the plan to partition Palestine. Less than two weeks later, the settlements found themselves under siege, and over the next few months they were under continuous attack. Within six months, hundreds of settlers had been massacred or taken as prisoners. Their buildings were completely destroyed, and thousands of trees were uprooted.

During the 19 years the Gush Etzion area was under Jordanian control, the Lone Oak was just about the only identifiable landmark visible from the Jerusalem hills. It came to symbolize the former residents’ desire to return to their homes (and in fact today, the oak is the logo for the regional council).

After the 1967 Six Day War returned Gush Etzion to Israel, the sons and daughters who had been evacuated during the siege requested permission to return to their lands. The first kibbutz there, Kfar Etzion, was re-established in September 1967.

Hurshat Tal is one of the northern jewels in Israel’s national park system. Expansive lawns, together with streams and pools of clear cool water, combine to make this a particularly inviting spot. The park is dotted with hundreds of huge Mt. Tabor oaks that are among the largest in the country.

According to local legend, 10 of the Prophet Mohammed’s messengers once rested in Hurshat Tal. With no trees to provide shade or hitching posts, they pounded their staffs into the ground to fasten their horses. Overnight, the staffs grew into trees, and in the morning the men awoke to find themselves in a beautiful forest.

One of Israel’s major tourist destinations, and a World Heritage site to boot, the Bahai World Centre is an architectural and landscaping masterpiece. Haifa and its northern neighbor Akko have great significance for the 5 million adherents of this 19th-century religion.

The genesis of the gardens came in 1891, when Bahai religious leader Baha’u’llah ascended the Carmel mountain with his son. Together, they walked until they arrived at a small clump of cypress trees. At that point, Baha’u’llah indicated to his son that this would be the future center of Bahai.

Today, the small clump of cypress trees can still be found on the grounds of the garden— little changed from how they appeared more a hundred years ago.

So, next time you visit Israel and pass by a gnarled ancient tree, take a moment to reflect on the story behind the tree. Perhaps it was planted by early Jewish colonists working for the Turkish authorities, or perhaps it has outlived whole towns or villages that existed on the same spot in previous centuries. At one point, it may have been a landmark in an otherwise barren countryside now crowded with buildings and automobiles. Every tree has a story. You just have to ask.