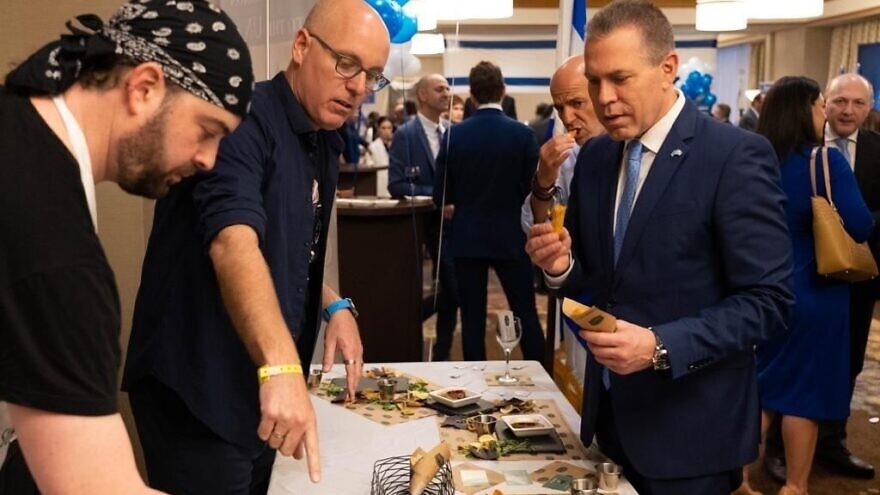 (May 16, 2022 / JNS) Israel is sick and tired of the way it is treated by the United Nations. And so, it’s going to make member states an offer they can’t refuse.

It sounds a bit silly on the surface, but food insecurity in a deadly serious and growing problem. That’s why Israeli Ambassador to the United Nations Gilad Erdan hosted dozens of ambassadors from around the world for an Israeli Independence Day celebration featuring some of Israel’s contributions to the world of food technology.

“I see it as a huge part of my role to showcase Israel’s contribution to solving the world’s challenges, and some of the main sustainable development goals of the U.N. are being addressed by Israeli companies: high-tech companies, cyber tech, food tech,” he said.

The event was attended by about 250 people, including the Good Food Institute and several Israeli food-tech companies. Guests sampled products including poached eggs, schnitzel nuggets, pastrami sandwiches, cheeses and ice-cream—all produced with Israeli technology, and done so in a sustainable manner without using animal products.

Among the companies was ReMilk, founded by Aviv Wolff and Ori Cohavi. It uses microbial fermentation to produce milk proteins and craft a product that has the same flavor, texture and nutritional value as dairy from animals while eliminating cholesterol and lactose. They offered samples of their cream cheese at the celebration.

“It is a real cream cheese made without cows. What I mean by that is we produce real milk proteins through a fermentation process; we use yeast and feed them a simple sugar source, and they convert that sugar source into milk protein,” Jason Rosenberg, head of Business Development at ReMilk, told JNS. “We then take that protein and combine it with plant-based fat and plant-based sugar, and produce real dairy products like this cream cheese that are lactose-free, cholesterol-free, animal-free and everything else that you would want in a sustainable clean product.”

Rosenberg said ReMilk is in the process of building its own production facility in Denmark. Set to break ground by the end of the year, it would be the largest precision fermentation facility in the world.

InnovoPro has developed a technology capable of extracting protein concentrate that is 70% chickpea. Its technology harnesses a biotechnological process that yields an emulsifying, foaming product suitable for a range of industrial food applications.

“It’s the next generation of plant-based proteins. We’re here to make better tasting products, produce the total number of ingredients in ingredient labels,” InnovoPro’s Mark Orlowski told JNS. “We’re not using any solvents for a sustainable green, clean protein process that ultimately enables CPG [consumer packaged goods] manufacturers to create more nutritious and delicious products with higher protein that are ultimately going to help make the world a little cleaner, a little greener, and we were not using any solvents. We have less waste, and our long-term goals are to be zero waste—a fully sustainable manufacturing operation that hopefully makes the world a little bit better.”

SuperMeat, founded by Ido Savir, Shir Friedman and Koby Barak, is creating cultivated chicken meat for the business-to-business and business-to-consumer markets. While their product is not yet commercially available, “The Chicken”—the company’s test kitchen—has been transformed into a restaurant to enable customer engagement and feedback.

“We produce meat from animal cells. The way it works is if you take a stem-cell sample from the animal, we provide it all the nutrients it needs in order to grow and thrive until it reaches the desired size,” Osnat Shostak, head of business development at SuperMeat, told JNS. “And then we harvest it. It’s essentially meat both in terms of the meat experience and nutritional profile.”

“I think for us, specifically, it relates very well to Independence Day because we grow meat—sustainable, slaughter-free, antibiotic-free meat. So, hopefully, next Independence Day, everyone can do a barbecue using our meat instead of traditionally grown meat,” she said. 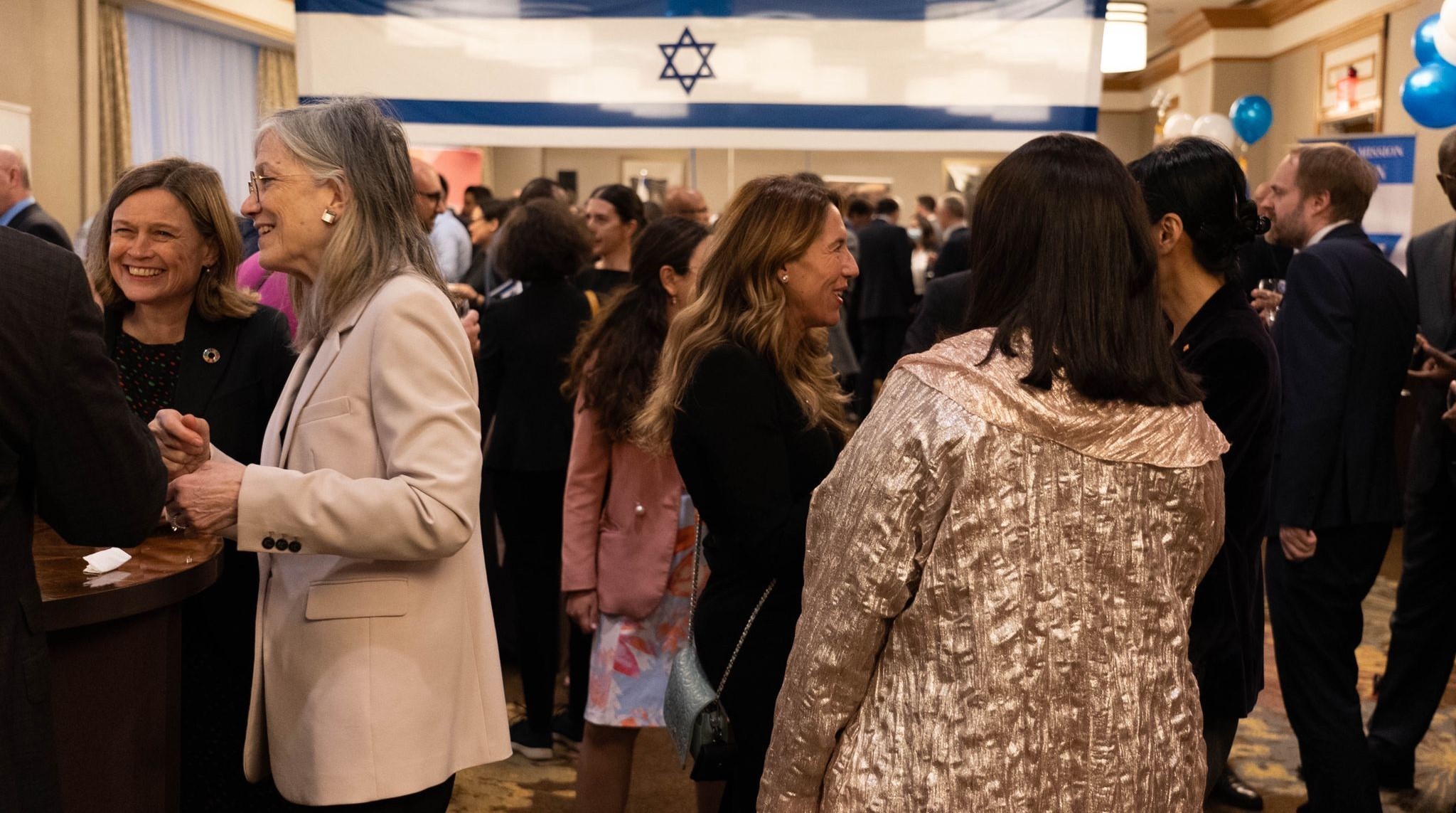 About 250 guests, including ambassadors from around the world, sampled breakthroughs in Israeli food technology at an Independence Day celebration hosted by Israel’s mission to the United Nations on May 13, 2022. Photo by Uri Westrich.

A force for good in the world

And that’s exactly the point, according to Erdan—to give Israelis and the world a taste of the future, and independence from food insecurity.

“Even today,” said Erdan to the crowd, “the scent of grilled meat immediately brings back the fondest childhood memories of celebrating Independence Day with my family at the park in my hometown of Ashkelon—my father fanning the coals while my siblings and I prepared the meats.”

This year, he said, “we chose to do something different to implement our vision of the future. Rather than organizing a barbecue, we opted for a sustainable choice. We decided to give you all a ‘taste’ of our shared vision, literally and figuratively. A taste of Israel’s dominant role in a sector that is about to change the world and ensure our future: food tech.”

He wasn’t hesitant to point out to those in attendance the inherent bias against Israel perpetuated at the United Nations and how it contradicts Israel’s support of the world in times of trouble, including earthquake rescue efforts in Haiti and Turkey, and the building of the first field hospital this year in Ukraine.

Combined with its technological offerings in critical areas of global sustainability, Erdan says it’s time that U.N. member states recognize the Jewish state’s force for good in the world.

“Just a few months ago, I hosted an event with 25 African ambassadors and with an Israeli NGO, Innovation Africa, to show them how Israelis are involved to connect African villages to running water and renewable energy—basically giving their people life. So, I hope it’s going to influence their voting patterns at the U.N. That is my role. I’m connecting their national interest with their voting patterns towards Israel,” he told JNS.

Either way, the next Israeli Independence Day will carry a theme such as this one.

Quipped the ambassador: “The best way to describe almost every Jewish holiday—from Passover to Hanukkah to Purim—is as follows: ‘They tried to kill us. We won. Now, let’s eat!’ ”