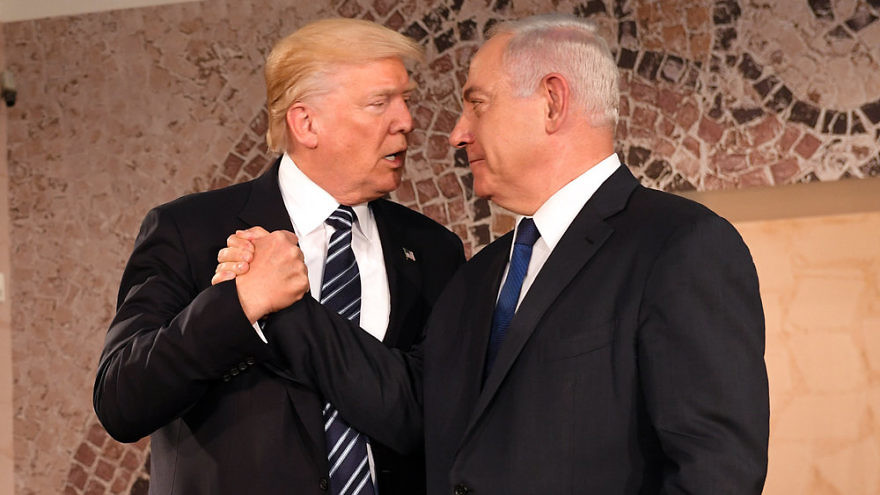 Leaders of major American Jewish organizations are applauding the Trump administration’s new global strategy doctrine, which rejects the notion that the Israeli-Palestinian conflict is the main cause of Mideast turmoil and says any solution must be acceptable to both sides.

The doctrine was presented in a 68-page document titled “National Security Strategy of the United States of America,” which was released by the White House on Dec. 18.

The Trump administration’s global strategic approach, as described in the document, focuses placing American interests ahead of global concerns, strengthening the U.S. military position around the world and fighting the war against terrorism with no holds barred.

The report contains two references to Israel. The first notes that while in the past, the Israeli-Palestinian conflict was often seen “as the prime irritant preventing peace and prosperity in the region,” today it is widely recognized that the actions of Iran and terrorist organizations, not Israel, are “the cause of the region’s problems.”

The second mention of Israel in the Trump doctrines states, “We remain committed to helping facilitate a comprehensive peace agreement that is acceptable to both Israelis and Palestinians.”

This is a change from the approach of the Obama administration, which promoted specific terms for an agreement. President Barack Obama declared in a May 19, 2011, speech that “the United States believes that negotiations should result in…a sovereign and contiguous” Palestinian state “based on the 1967 lines.” He made no reference to the question of whether or not such an outcome was acceptable to Israel.

Malcolm Hoenlein, executive vice chairman and CEO of the Conference of Presidents of Major American Jewish Organizations, told JNS he considers the Trump stance to be “a positive change from the positions of the Obama administration.” Hoenlein said he agrees that Iran and terrorist groups “are the real threats to peace,” and that any Israeli-Palestinian peace agreement needs to be acceptable to both sides, “not imposed by the United States.”

In a statement to JNS, B’nai B’rith International said the actions of Hezbollah and Hamas, and “Iran’s growing presence and influence in Syria, which already effectively controls Lebanon,” are the main threats to peace and “should be a cause for alarm among those who seek stability, not chaos in the region.” B’nai B’rith said that “rather than spending time on Jerusalem resolutions at the U.N., the international community should be focusing on Iran and its proxies.”

The B’nai B’rith statement also praised the Trump doctrine’s rejection of the idea of imposing a Palestinian state on Israel. “The Palestinian side has perfected the art of evasion, obfuscation and procrastination, while all the while working overtime to delegitimize and demonize Israel,” B’nai B’rith noted. “After decades of this, questions about the Palestinian Authority’s sincerity is seeking an agreement needs to be asked.”

Notably, two major Jewish organizations—the American Jewish Committee (AJC) and Anti-Defamation League (ADL)—have so far not responded to requests for comment from JNS on the Trump doctrine. AJC describes itself as a centrist group. ADL, meanwhile, has been a frequent critic of Trump over the support the president draws from white supremacists.

Rabbi Abraham Cooper, associate dean of the Simon Wiesenthal Center, called the Trump doctrine’s references to Israel “extremely important” and said he hopes “they are embedded in every aspect of U.S. policy.” He said that the Wiesenthal Center’s experiences in building relations with Arab Gulf kingdoms, including its recent hosting of a 25-member delegation to Israel from Bahrain, “are proof that more and more Arabs also agree that the Palestinian issue is not the most important when the region faces existential threats from Iran.”

Cooper added he was glad to see that the Trump doctrine’s approach “seeks to undo the disastrous Obama policies vis-à-vis Iran.”

AIPAC spokesman Marshall Wittmann said the pro-Israel lobby group has “long believed that the central threat to the stability of the region is the dangerous behavior of the Iranian regime and terrorist organizations such as Hezbollah and Hamas,” not the Israeli-Palestinian conflict. Wittman said AIPAC agrees “that direct, bilateral negotiations between the Israelis and the Palestinians are the best path to a durable peace.”

Betty Ehrenberg, executive director of the World Jewish Congress in North America, said the Trump administration is correct to recognize that the Middle East is “plagued by a myriad of issues that have been festering” for many decades and have nothing to do with the Israeli-Palestinian conflict, such as “corruption and exploitation by Arab governments of their countries, without regard for the needs of their populations.”

The Arab regimes “cannot continue to hide behind the distraction of blaming Israel for all the ills in the region,” Ehrenberg told JNS. She said that overspending on weapons, domestic repression and “heated religious, political and ideological differences, especially the fomenting of radical and extremist attitudes…are the major causes of the instabilities. Iran and its support of regional and global terrorism plays a major role in all this, in addition to its mad drive to achieve nuclear capability.”

Ori Nir, spokesman for Americans for Peace Now (APN), told JNS that the Trump administration’s professed commitment “to facilitating an Israeli-Palestinian peace agreement is definitely positive,” although in APN’s view, the administration’s actions so far “don’t suggest to us a serious commitment to a viable peace settlement.” At the same time, Nir said, APN agrees that an agreement should not be imposed but rather “would have to be the result of direct negotiations by the leaderships of Israel and the Palestinians.”

Paul Scham, co-president of Partners for Progressive Israel—the U.S. affiliate of the left-wing Israeli political party Meretz—is even more critical of the doctrine. He told JNS that in his view, Saudi Arabia, not Iran, is “perhaps the most significant exporter of state terrorism in the region,” and that the Israeli-Palestinian conflict is indeed one of the causes of regional instability, but not “of higher priority than Yemen or Syria.”