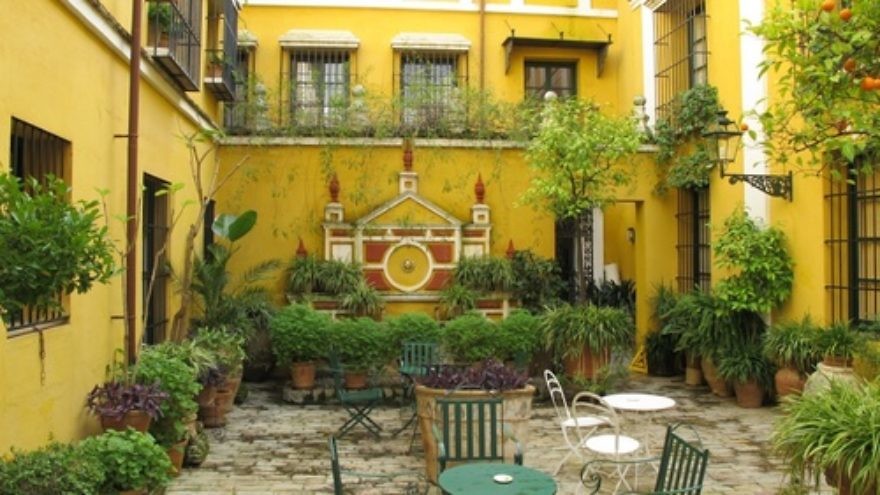 My passion for speaking Spanish, watching Flamenco, drinking Rioja, admiring artwork, walking a labyrinth of narrow streets, and inhaling the scent of orange blossoms intensifies on every visit to Spain.

These interests influenced my choice of careers as a Spanish teacher and travel writer. On repeated trips studying at the University of Salamanca, walking the Camino de Santiago, driving to Galician wine estates, vacationing in Mallorca and Marbella, experiencing spas in Bobadilla and Alicante, attending the Expo in Seville and the Olympics in Barcelona, the culture continues to fascinate me. It also prompts me to pay respect to my Jewish heritage by visiting Jewish communities and attempting to understand what happened there, if not ever comprehending why.

I visited Chamberí, Madrid’s old Jewish quarter (Judería Vieja), for the first time last November to have lunch at La Escudilla, the city’s only kosher restaurant. Its address on Calle de la Santísima Trinidad (Sacred Trinity Stret) and close to the Iglesia (Church) subway stop illustrates a common practice in Spain: after the Jews were expelled in 1492, Christians took over the former Jewish neighborhoods and Christianized the public sphere.

Viviana, the chef and owner, personally serves homemade Sephardic dishes: hummus, beets, eggplant, carrots, and a tomato-onion-cucumber salad followed by a bright, vegetable-studded couscous and a simple roast chicken. Skewered beef was served to a nearby table.

She suggested that I visit Beth Yaacov Synagogue, where I was told that the Jewish community numbers 3,000-4,000. If you go, make an appointment and take a passport for security checks.

Viviana also recommended the nearby Carnicería Elias, a kosher food store. When I arrived, it was closed for a mid-afternoon work break (2 or 3 p.m. to 5 p.m.) and I was reminded of the once-prevalent practice of siesta. Small shops are still shuttered in the afternoon, while large department stores like El Corte Inglés, where the Gourmet Department stocks kosher foods, remain open all day.

Dining at 10 p.m. is another cultural pattern that endures. Tourists notice this because restaurants are empty before 9:30 p.m. Spaniards meet friends at casual Tapas bars at 8 p.m. and have a sherry, beer, or wine served with tapas—manchego (cheese), aceitunas (olives), and salted almendras (almonds)—and discuss where to dine. Raciones (small plates to share) are available a la carte and some are vegetarian—tortillas (egg and potato pies) and papas bravas (roasted potatoes with a spicy tomato sauce), or pan tomate, (tomato puree on toast). Tapas can either precede dinner or replace dinner.

The name Lavapiés, the “new” (pre-1492) Jewish quarter of Madrid, is a reference to the tradition of the washing feet before entering the ancient Temple. Today the area is a multiethnic mix of artists, intellectuals, and immigrants who mingle at tapas bars that line the streets. I was introduced to a gem: La Musa de Espronceda, where the bar is lined with platters of huge portions of open-face Basque sandwiches. It’s just a short walk from the church of San Lorenzo, a former synagogue, Atocha Railroad Station, and the Museum of Reina Sofia.

Reina Sofia is a must-see, for me, to pay homage to Picasso’s Guernica, the iconic anti-war painting the artist created after Franco bombed the little Basque village. General Franco had previously invited Picasso to display a painting at the World’s Fair in Paris 1937, and the famed cubist artist refused to give the mural to Spain until after Franco’s death.

Reina Sofia is one of three major art museums in the Museum Triangle on or near Paseo del Prado, a beautiful tree-lined boulevard dominated by The Prado Museum and extraordinary early 20th-century palace hotels: the Ritz and the Westin Palace. The Prado houses extraordinary works by artists like Goya, El Greco, Velazquez, Titian, Rubens, and Van Dyck. Nearby, the Thyssen-Bornemisza is a private museum displaying Italian, German, and Dutch masters—favorites like Chagall, Renoir, Klee, and Van Gogh—and even works from the Hudson River School. Nearby, there are exhibits at the gorgeous Palacio de Cibeles, where the rooftop offers amazing city views. It’s also fun to have a drink on the rooftop of the ME hotel on Plaza de Santa Ana.

Madrid’s architecture also lures visitors to make it the home base of a Jewish heritage vacation. It’s a city with 17th-century Hapsburg architecture near the Plaza Mayor, ornate 18th- and 19th-century buildings during the Bourbon reign, and early 20th-century opulence along the vibrant Gran Via. And, there’s lots to do: the Rastro, a Sunday morning market at Puerta del Sol, designer boutiques along Calle Serrano, the gardens of Buen Retiro, and restaurants and galleries galore.

From Madrid, it’s easy to visit smaller cities where vestiges of the once vibrant Jewish community survive. Traveling on day trips via high-speed AVE trains is an easy and comfortable way to go, luggage-free.

The train from Madrid’s Atocha Station to Toledo—which once had the largest Jewish population—takes 35 minutes. Jews, Muslims, and Christians lived in this multicultural medieval. Of 10 synagogues, two that were converted into churches post-1492 survive. Sinagoga del Tránsito is now Museo Sefardi, and the 12th-century Sinagoga Santa Maria la Blanca has stunning Mudejar arches and floor tiles (notably, it’s on the street of the Reyes Catolicos, the Catholic kings). The El Greco Museum is worth a visit, and so is the Parador.

The AVE rail trip to Segovia leaves from Chamartin Station and arrives 35 minutes later. The former Sinagoga Mayor, now the Corpus Christi church, opens the Jewish quarter. Segovia’s highlight is the medieval menorah that dates from the Jewish Golden Age in Spain. It is located at the Jewish Museum in the Judería within the former home of a prominent resident Abraham Seneeor.

Córdoba, a UNESCO World Heritage Sight, is less than two hours via AVE from Madrid. The Juderia—near the Tourist Office in Plaza Juda Leví—is notable because its 14th-century synagogue is the only one in Spain not turned into a Christian building, and because there’s a monument to Maimonides, the Jewish doctor and religious thinker.

More time is required for some destinations. By adding an overnight, visitors can leave Cordoba for Seville in time for dinner and stay at a charming, small four-star hotel in Santa Cruz, Sevilla, called Hotel Casas de la Juderia. It’s located on Calle Santa Maria de la Santa, next door to a church with that same name that once was a synagogue.

This hotel resembles a tiny village comprised of a series of pastel townhouses, some dating to the 16th century, fronted by flower-filled courtyards and siding narrow paths. There are arches and columns, expansive rooms, and suites. Add another day for Granada, where the Fountain of the Lions at the amazing Alhambra Palace was a gift from the Jewish community. At the entry to the palace, visitors can see artisans at work creating taracea—geometric patterns inlaid into wood boxes, tables, and chessboards.

In Cosmopolitan Barcelona, just two and a half hours from Madrid via the AVE rail, Jews, including the 13th-century sage Nachmanides, once comprised 15 percent of the population. Here, like many places in Spain, there are hints of a vanished world—but one that I never tire of exploring.

Irvina Lew (www.irvinalew.com) is a member of the American Society of Journalists and Authors and the Society of American Travel Writers.