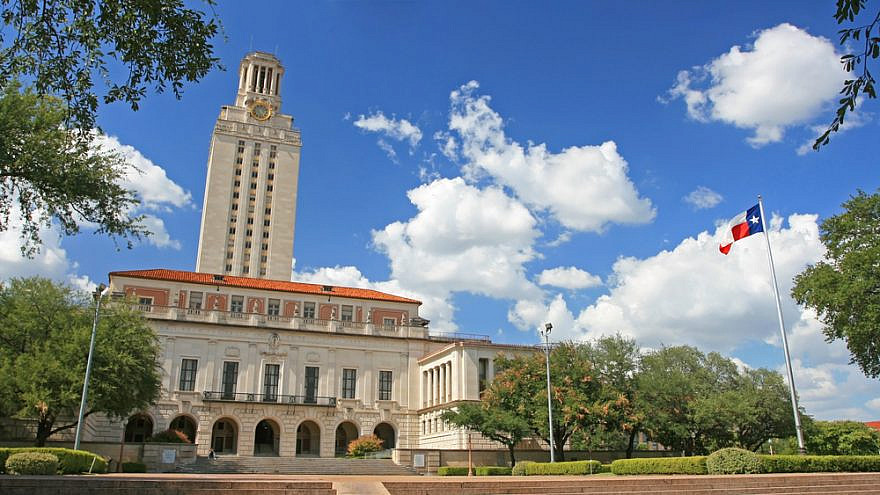 (February 11, 2022 / JNS) Jewish students and their supporters have launched a petition urging the University of Texas at Austin student government to reject a proposed measure condemning the International Holocaust Remembrance Alliance (IHRA) working definition of anti-Semitism.

The resolution, titled Anti-International Holocaust Remembrance Alliance Joint Resolution, which is being considered by the UT Senate of College Councils and the Graduate Student Assembly, seeks to “affirm the speech, actions, protests and campaigns of students advocating for Palestine as a protected right at the University of Texas at Austin.”

It further states that the “IHRA definition of anti-Semitism has notoriously been harmful to the speech and rights of pro-Palestine advocates on campuses … as it falsely conflates criticisms of the State of Israel as a form of anti-Semitism.”

The definition, however, does not say that all criticisms of Israel are anti-Semitism. It spells out that “criticism of Israel similar to that leveled against any other country cannot be regarded as anti-Semitic” noting that “denying the Jewish people their right to self-determination, e.g., by claiming that the existence of a State of Israel is a racist endeavor” is an example of anti-Semitism.

The University of Texas adopted the IHRA definition in March 2021.

The petition, which has so far garnered more than 2,500 signatures as of Friday afternoon, says that the authors of the resolution “belittle our lived experiences with anti-Semitism by claiming these instances were not about Jewish people, but rather that our advocacy to educate our peers on ways to prevent antisemitism was actually a nefarious plot to harm others.”

The authors of the petition further add that while they are happy to affirm the right to free speech, “this resolution alleges that the Jewish community at UT is responsible for global censorship, and that is inherently anti-Semitic.”

“The conflation of Jewish students advocating to prevent anti-Semitism with censorship or stifling free speech is simply disgusting and evokes historic anti-Semitic stereotypes of which we are all too familiar with,” the petition said.

Jacob Baime, Israel on Campus CEO, told JNS that the Jewish community “is tired of trying to explain and justify what does and does not constitute hate and discrimination towards Jews.”

“Last year, when Jewish students at the University of Texas at Austin passed a resolution defining what anti-Semitism meant to them in the Undergraduate Student Government, I’m sure they did not imagine that their classmates would come back to the Graduate Student Assembly and the Senate College Council, and attempt to reverse this decision.”

Baime said the complaint being leveled against Jewish students that Israel should be separate and distinct from any charges of anti-Semitism “completely ignores the fact that for the vast majority of Jews, Israel is an integral part of their Jewish identity.”

“As American Jews, we need courageous leaders to stand up and call these attempts to define hate for the Jewish community what they are—the textbook definition of anti-Semitism,” he said. “At what point do we say enough is enough?”