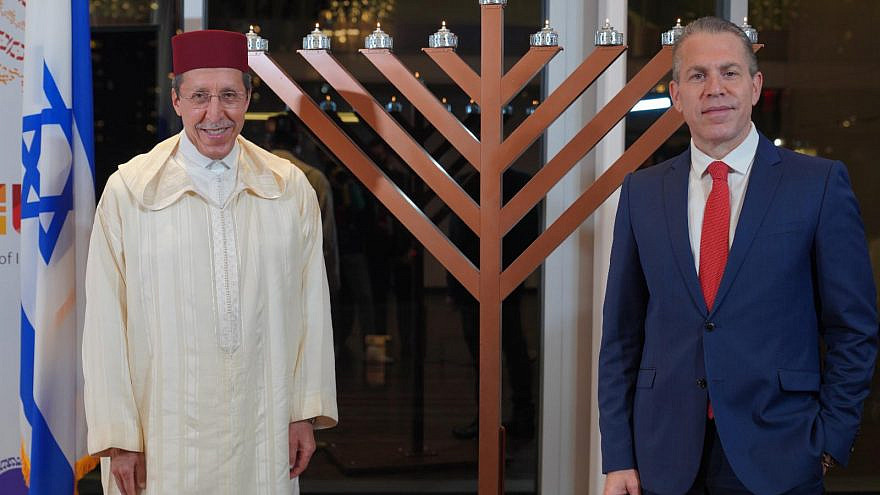 For the first time, Israel’s Ambassador to the United Nations Gilad Erdan hosted his counterparts—the ambassadors of Morocco, United Arab Emirates and Bahrain—in a public event on Thursday evening to mark the final night of Hanukkah.
He and Morocco’s Ambassador to the United Nations Omar Hilale attended the event in person, jointly lighting the final candle and reciting the Hanukkah blessings.
Addressing Hilale, Erdan noted the historic nature of the event, coming one week after Israel and Morocco formally established ties: “The deep connection between Morocco and the Jewish people dates back thousands of years. Renewing these relations fulfills the dream of many Israelis of Moroccan heritage, who remain proud of their roots and have a great love for the country.”
He added, “If you would have told me just a few months ago that I would be lighting Hanukkah candles with my friends from the UAE, Bahrain and Morocco, I would have said impossible. But here we are, sending a message of hope to the young people of our region that anything is possible.”
The event, organized by the Permanent Mission of Israel to the United Nations and co-hosted by the Forum for Cultural Diplomacy, also included the participation of U.N. ambassadors from the United States, Albania, the United Arab Emirates, India, Bahrain, Australia, Rwanda, Guatemala and Italy, with each representative lighting a candle of the Hanukkah menorah from a remote location. Rabbi Yehuda Sarna of the Jewish Council of the Emirates served as the moderator.
In his remarks, Hilale said “Hanukkah is the hope for tomorrow. Hanukkah is peace. Hanukkah is existing together. Hanukkah is loving each other. Hanukkah is rejecting violence. Hanukkah is combating terrorism. Hanukkah is building bridges between people, civilization and culture.”
He continued, saying “we are all the sons of Abraham, and at the end of the day, we must sit together to make peace, to exist together and to make a better future together for the next generation.”
Republish this article in your newspaper or website