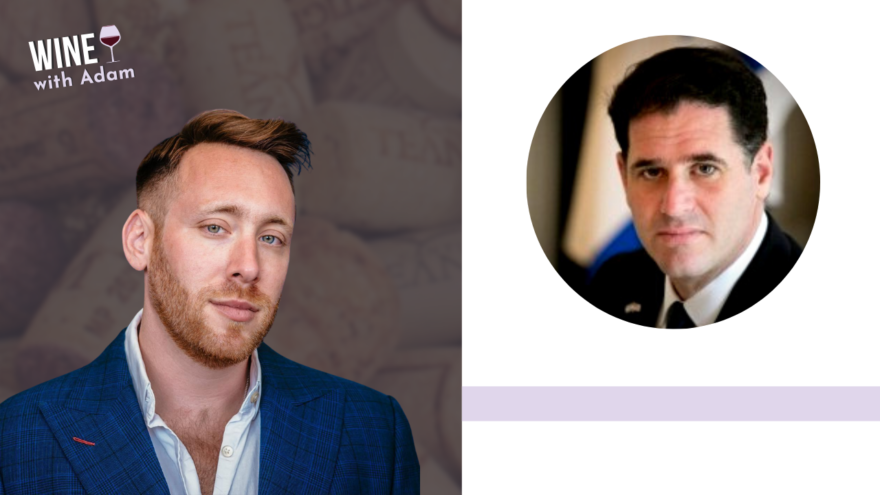 “Challenge those people who are doing it and demand that their governments challenge it,” Dermer said in this week’s Wine with Adam. “If they are afraid to speak up or they are waiting for other people to do it, that’s not going to work.”

Dermer and host Adam Bellos enjoy a glass of 2018 Shiloh Cabernet Sauvignon over a conversation about anti-Semitism, Israeli politics, Iran and the Jewish future.

The former ambassador noted that anti-Semitism is thousands of years old, something he said Jews today tend to forget. Hate against Jews existed long before the founding of the Jewish state, he said.

Anti-Semites are “lighting the fuse” of a 2,500-year-old powder keg, “and they have to be held accountable,” said Dermer. “It’s different for blacks, for gays, for women, for anyone else. For Jews, it’s open season and the only way you’re going to put an end to this is to hold them accountable. Somebody has to pay a price for making these statements,” he added.

‘Israel has to be very strong’

The difference today is that the Jewish people have Israel, said Dermer, though he admitted that just as Israel is not the cause of anti-Semitism, neither is it some miracle cure. However, he added, ensuring a strong and powerful Jewish state—making Israel an economic and military power—will lead to better diplomatic relations.

After Israel’s victories in the Six-Day War and the 1973 Yom Kippur War, the Egyptians desired peace, he noted.

“If you can’t beat them, let’s join them,” he quipped. “That’s why you heard the prime minister [Benjamin Netanyahu] say, for as long as I can remember, that no one makes alliances with the weak, and that Israel has to be very strong.”

Moreover, making dangerous concessions not only does not bring peace but “actually makes Israel a worse ally,” he said.

The younger generation of Jews should be grateful that they are living in a time when there is a sovereign Jewish state, he added.

“We had 100 generations that dreamed of it, and only the last three had the privilege to live in it. I think we take it for granted. … It’s hard for people when they’ve been born into something to realize how unique it is.”