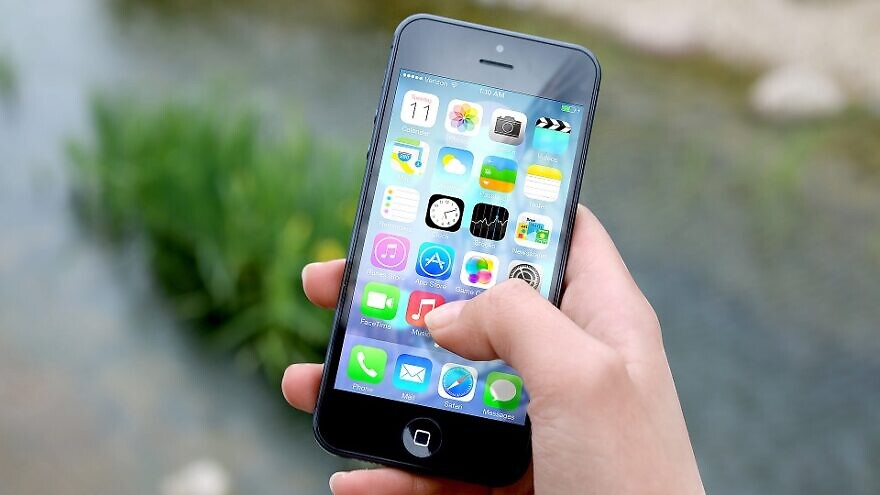 (January 7, 2022 / JNS) A new study from Tel Aviv University found that interaction between mothers and toddlers is reduced by a factor of four when the mothers use their smartphones, which might damage the toddler’s development and have even greater and far-reaching consequences.

The results of the new study, which was led by Dr. Katy Borodkin of the Department of Communication Disorders at the Stanley Steyer School of Health Professions, Sackler Faculty of Medicine of Tel Aviv University, were published in the top-tier Journal of Child Development.

The experiment involved dozens of mothers of toddlers (aged 2 to 3 years).

The mothers were ostensibly invited to participate in a study examining the link between the mother’s and the child’s interests, and so they were asked to perform three tasks: Browse a designated Facebook page, and “like” videos and articles that interest them; read printed magazines and mark articles that interest them; and finally, play with the child while the smartphone and magazines were outside the room (uninterrupted free play).

“Our goal was to simulate situations in real life where the mother has to take care of her child, while at the same time devoting some of her attention to her smartphone,” explains Borodkin. “The mothers were unaware of the purpose of the experiment, so they behaved naturally by splitting their interest between the toddlers, and the smartphone and magazines. We videotaped all the interactions between the mothers and the toddlers, and later scanned the recordings frame by frame in an attempt to quantify the mother-child interaction.”

Researchers from Tel Aviv University have defined three components of mother-child interaction. The maternal linguistic input was examined first, which is the linguistic content that the mother conveys to the child.

According to previous research, this is an important predictor of a child’s language development. It has been found in the past that reduced linguistic input leads to reduced vocabulary in a child, even as an adult. Next, conversational turns were examined—for example, how interactive the discourse was. This is a predictor of language and social development, as the child learns that he or she has something to contribute to the interaction as well as the basic social norms of social interactions.

Finally, maternal responsiveness was examined, such as to what extent the mother responds to child bids. This is a measure of the immediacy of the response and its contingency on the child bid’s content.

This measure is the basis for almost every aspect of child development: linguistic, social, emotional and cognitive.

“We found that the three components of mother-child interaction were reduced by a factor of two to four relative to uninterrupted free play, both when the mother was reading printed magazines and browsing on her smartphone,” says Borodkin. “In other words, the mothers talked up to four times less with their children while they were on their phone.”

“Moreover, they exchanged fewer conversational turns with the toddler, provided less immediate and content-tailored responses, and more often ignored explicit child bids,” she continues. “Even when they were able to respond while browsing Facebook, the quality of the response was reduced—the mothers kept their responsiveness to a bare minimum to avoid a complete breakdown in communication with the toddler.”

Equally interesting is the fact that no difference was found between browsing a smartphone and reading magazines.

“We did not find that one media distracted more than the other,” says Borodkin. “However, it is clear that we use smartphones much more than any other media, so they pose a significant developmental threat. It should be noted that we currently have no research evidence suggesting an actual effect on child development related to the parental use of smartphones, as this is a relatively new phenomenon. However, our findings indicate an adverse impact on the foundation of child development. The consequences of inadequate mother-child interaction can be far-reaching.”

To conclude, Borodkin adds: “In our current research, we focused on the mothers, but we believe that our findings characterize communication interferences between fathers and their toddlers as well, since the smartphone-usage patterns are similar between men and women, thus allowing us to estimate with high probability that the research findings are applicable to fathers and to mothers.”