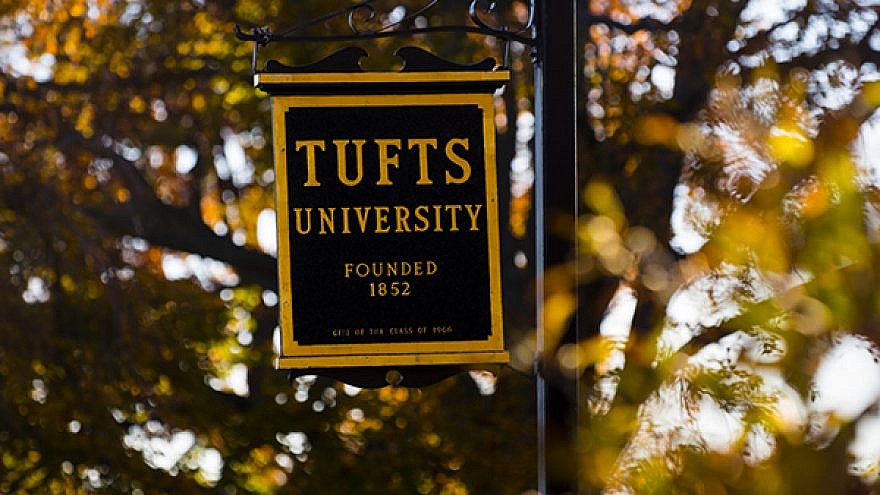 (March 23, 2022 / JNS) A petition by the Students for Justice in Palestine chapter at Tufts University that calls on students to boycott pro-Israel organizations and Israeli products is drawing outrage.

“This bigoted campaign—based on false, inflammatory claims singling out Jews and the Jewish state—is not just a stain on the university if no penalty is enacted but it violates Tufts Non-Discrimination Policy,” Aviva Rosenschein, international campus director for CAMERA on Campus, said in a statement to JNS on Tuesday. The school’s policy prohibits “discrimination against and harassment of any student, employee, applicant for employment, third party, patient, visitor or community member because of race, color, national or ethnic origin, ancestry, age, religion, disability, sex or gender.”

Rosenschein added that considering the campaign’s violation of Tufts own anti-discrimination policy and its “reprehensible incitement against the Jewish community,” she believes that Tufts University president Anthony Monaco and the Tufts Community Union Judiciary should revoke SJP’s status as a registered student organization.

On March 14, SJP at Tufts launched a “BDS Pledge,” asking students to refuse to “buy products or participate in groups that benefit and normalize Israel.”

Several student organizations, including Birthright, Tufts Friends of Israel, Tufts Hillel’s Vision of Peace program and an internship program provided by the Anti-Defamation League, are singled out in the petition. Another student group called out in the pledge is TAMID at Tufts, which connects students to professional opportunities in Israel.

The pledge also asked participants to boycott all Sabra and Pillsbury products sold on the school’s campus. SJP said its campaign urges students “to demonstrate their support for Palestinian liberation by committing to BDS until Palestine is free.”

Patrick Collins, the university’s executive director of media relations, said in statement to the school’s newspaper on March 17: “It is particularly disappointing that [SJP] have chosen to ask fellow students to boycott not just companies but other student groups on campus. [SJP’s] most recent campaign is divisive and harmful. It doesn’t help foster important conversations; rather, it shuts them down while ostracizing fellow students.”

“The programs and student groups targeted in this boycott represent a wide spectrum of views on Israel whose main overlap is that they are committed to productive dialogue,” they said. “[W]e firmly believe that dialogue is the only route to deeper understanding between people of divergent views and a lasting peace between Israelis and Palestinians.”

Leaders from FOI, Vision of Peace and TAMID also expressed disappointment in the pledge and SJP’s BDS efforts.

J Street U Tufts, another student group singled out in the boycott, has publicly denounced Israeli “occupation” and claimed that Israel is demonstrating “Jewish supremacy that is unjust, counter to Jewish values and violates international law.”

Violet Kopp, the co-chair of J Street U Tufts, told The Tufts Daily that the student group did not expect to be included in the pledge. She said “we think that, as a club, we have a lot more ideological similarities with [SJP] than not. So [our inclusion in the boycott] definitely came as a surprise.”

Explaining the decision to include the club in its boycott, SJP wrote in an email to J Street U Tufts’ co-chairs: “[W]e genuinely appreciate your efforts to move young Jews on the issue of the occupation. [B]ut we cannot in good faith ignore the fact that as an organization, J Street not only condemns BDS but also consistently uses the rhetoric of ‘conflict,’ denies Palestinians’ right to return, refuses to acknowledge ‘Israel’ as a white supremacist settler-colonial project and promotes a ‘two-state solution.’ ”