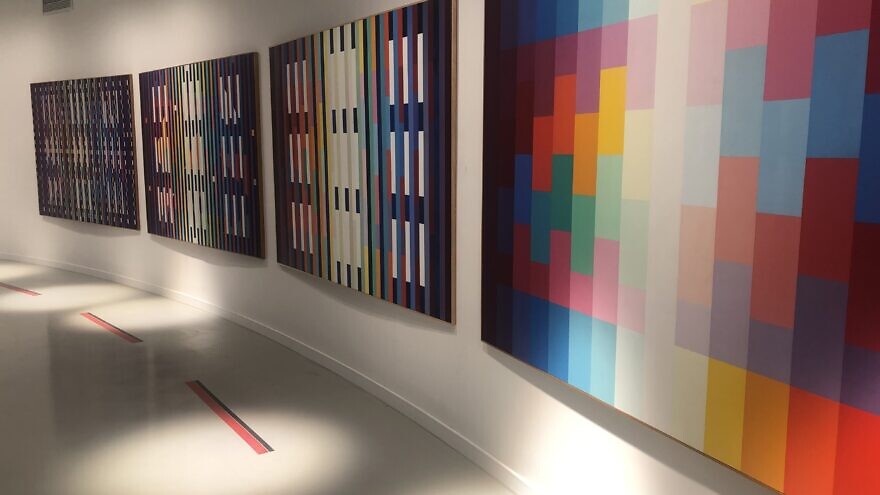 (May 24, 2022 / JNS) There’s only one museum in Israel dedicated to a sole living artist—the Yaacov Agam Museum in Rishon Letzion. Agam is so prolific and his work so striking that it’s not surprising that he merits a display space all his own.

Recently reopened after more than a year of pandemic closure, the airy museum space is filled with examples of Agam’s unique and colorful kinetic art created over the past six decades. It’s one of only a few museums in the world dedicated to Kinetic Art.

The museum is a good spot for tourists who might want to take a brief respite from nearby Tel Aviv, “the city that never sleeps,” or for Israelis who might want to get to know the artist behind the iconic “Fire and Water Fountain” that graced Dizengoff Square in Tel Aviv for more than three decades.

Agam, who celebrated his 94th birthday on May 11, was born in Rishon LeZion and partnered with the Rishon LeZion municipality in the creation of the museum, which opened in 2018.

While it’s best to book ahead and reserve a guide for a one-and-a-half-hour tour, visitors who arrive independently can download an app and enjoy a self-guided tour of the various colorful pieces in the collection, which are full of movement and symbolism.

Agam is considered to be the father of the Kinetic Movement in modern art, and a leading artist of the 20th century. At the museum, we learn that Agam was the son of a Kabbalist rabbi, imbibed Jewish spiritual values and loved nature. The kinetic, abstract style allowed Agam to remain true to the biblical commandment, “You shall not make any graven images.”

The sand dunes of Rishon LeZion apparently inspired him to trace drawings that would change constantly with the blowing wind and led him into the style that would be the hallmark of his long career.

At the entrance of the building are 29 intricately designed, brightly colored hexagonal columns called “Pillars of Clila,” after his late wife. The towering works, that tell a different visual story from each side, provide an inkling of the colorful treasures to be found inside the building. 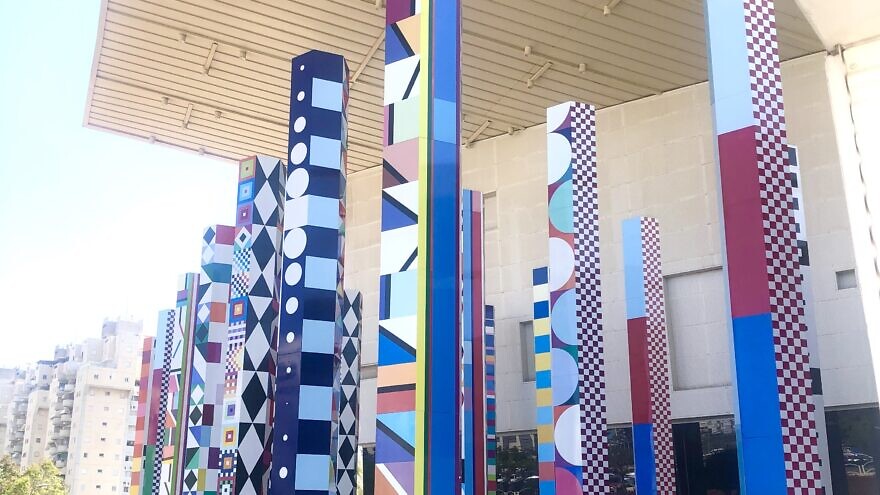 In the lower gallery, the first work we encounter is the only non-abstract piece in the museum.

“Portrait of the Artist with Heart in Motion” was created by a technique that layers six images of Agam himself behind a heart shape that gives the appearance of movement. It’s as if he is greeting visitors and inviting them to enjoy the rest of his more abstract and colorful creations.

One of the most striking pieces, in the center of the gallery is the blue, red and white “Jacob’s Ladder.” Based on the biblical story, its theme of dream and reality and the connection between the spiritual and the physical comes across clearly. The effect is multiplied as we see it reflected in the mirrors at the base and the top. It’s one of several pieces that include the Star of David, that comes into focus as we circle the ladder. 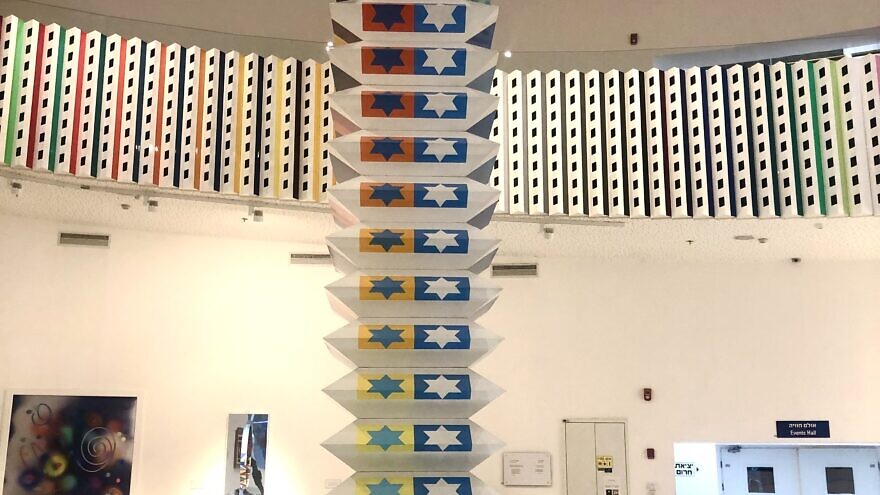 Many of the works on display are polymorphic, they change form depending on where they are viewed from. Due to that and their size, kids are attracted to them too.

On the lower level of the museum, several posters are on display that used his style to create interest in various exhibits and causes. My favorite is one Agam designed to draw attention to the plight of Soviet Jews on the occasion of the 1976 Second World Conference on Soviet Jewry in Brussels. I’ve had a print of it hanging on my wall since then.

The building’s central ramp displays the exquisitely colored “Panoramagam,” a 22-meter-long relief painting originally exhibited on the famous spiral of the Guggenheim Museum in New York. Walking along the curved walls, the vivid, rhythmically punctuated color fades in and out of the white background like a rainbow springing from light.

In the upper gallery, visitors can enjoy “Hearing the Colors” a temporary exhibit that’s set in the space of the permanent exhibit known as “Visual Music Orchestration.”

It includes a series of two-dimensional works that illustrate the connection Agam finds between plastic art and music. Modern interpretations of classical music created by artist Aviad Zinemanas play in the background, and the effect is mesmerizing. It allows the viewer to reflect on how Agam created the process of visual orchestration. According to one panel on display, Agam “views his work as a form of visual music,” and it’s easy to see that in action in this part of the museum.

The museum building, which fits in with the surrounding apartment buildings of a pleasant residential neighborhood, was designed by architect David Nofar and includes a cafe with outdoor seating in the shade of the Sculpture Garden.