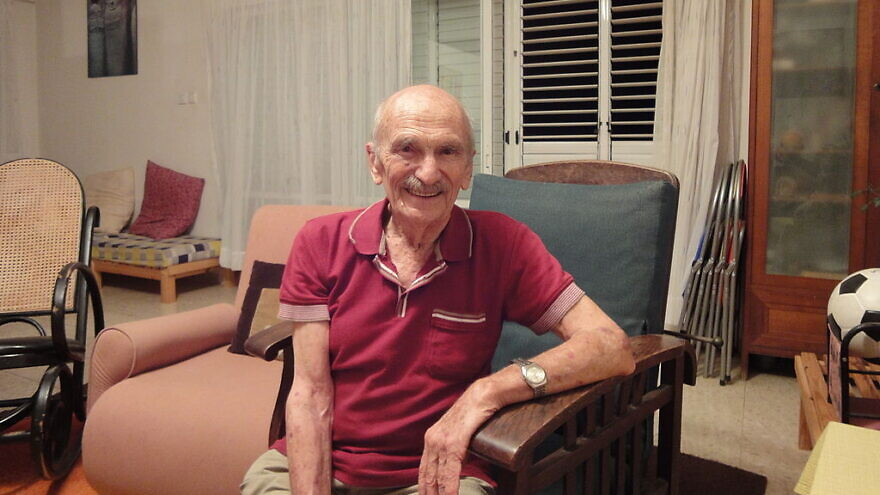 (November 8, 2022 / JNS) Uzzi Ornan, Irgun fighter, linguist and a follower of the Canaanite movement, died on Thursday in Nofit, in the Lower Galilee, at the age of 99.

Born Uzziel Halperin in Jerusalem in 1923 to a Chassidic father and an atheist mother, he grew up in Tel Aviv.

He was a member of the Irgun underground militia, and took the name of the Jebusite king called Ornan in the 1 Chronicles and Araunah in 2 Samuel, in an effort to deceive British authorities.

Nevertheless, Ornan was arrested in 1944 for assembling bombs, and detained in British prison camps in Eritrea, Sudan and Kenya until Israel achieved independence.

After his return to Israel in 1948, he became a linguist and promoted the ideology of the Canaanite Movement, which was founded by his older brother, Uriel Shelach, better known by his literary pseudonym, Yonatan Ratosh. Canaanism espoused an identity aiming to disconnect Jews from their Jewish past and create a new one that encompassed the Middle East’s Arab population as well. This included the idea of switching to the Latin script for Hebrew.

Ornan’s father, Yechiel Halperin, was a Hebraist, raising Ornan’s older siblings to speak Hebrew even before the family immigrated from Poland. But Ornan told this writer that he “picked up Yiddish from ‘here and there’ nevertheless.”

He went on to get a PhD at the Hebrew University of Jerusalem in 1964, and became a professor of linguistics. He also became a member of the Academy of the Hebrew Language, which sets the standards for the modern language.

Israeli-born Australian linguist Ghil’ad Zuckermann, who holds the chair of Endangered Languages at the University of Adelaide and is the president of the Australian Association for Jewish Studies, recalls how he enjoyed debating with Ornan, whom he had known since the 1990s.

He described Ornan as “an original thinker with very unique ideas.”

Zuckermann’s theory that Modern Hebrew (which he calls “Israeli”) is a different language from the original Hebrew of the Bible—due to the influence of Yiddish and other Diaspora languages, was heavily debated by the linguistics community, including Ornan.

“I remember once being invited along with Uzzi to Oranim Academic College [near Haifa] to discuss my idea that Israelis ought to learn Hebrew [biblical Hebrew] in order to understand the Old Testament, because their mother tongue (which they call Modern Hebrew but I call ‘Israeli’) is very different from the ancient language of Isaiah, due to non-Middle Eastern linguistic influence,” Zuckermann told JNS in an exclusive telephone interview from South Australia. “Uzzi and I differed on this issue very much,” he added.

“Uzzi opened his speech at Oranim by booming: ‘I disagree with Ghil‘ad’: All prescriptive, puristic grammarians in the audience were overjoyed as they initially assumed that Uzzi agreed with them that Modern Hebrew was in fact the same as biblical Hebrew, discounting my theory and … hinting that Israelis could easily understand the Hebrew Bible despite the numerous obvious grammatical differences,” he continued.

“But then Uzzi shocked the audience: ‘I prefer if Israelis do not learn Hebrew because I would prefer that they cannot understand such a cruel book! And the audience burst out laughing,” said Zuckermann.

As mentioned, Ornan’s older brother was the founder of the Canaanite movement, which Uzzi also championed. In an effort to secularize Israeli society, they proposed switching to the Latin script for the Hebrew language, just like Turkish and some Eastern European languages did—an idea that did not gain acceptance. They argued that the Latin alphabet was also a descendant of the Canaanite alphabet, just like the Hebrew script.

Ornan felt that the Hebrew writing system “came from religious roots and therefore does not fit in a secular state.” He was the main appellant for a Supreme Court case where a group of people intended to have their ethnicity defined as “Israeli” rather than “Jewish” on state-issued ID cards. The court ruled against them in 2013.

“My mother may have been Jewish in origin but I am not religious and so how can I be Jewish, and how can I be a citizen via ‘the right of return?’ I have always been opposed to this,” he explained to this writer a year before he died.

Zuckermann said, “Uzzi was very friendly and approachable, even if we did differ on many linguistic problems. Take for example, counter to my idea, embracing the fact that Diaspora-language influence on Israelis is something we can’t discount. But Uzzi’s Canaanism ideology was an ‘alternative nationalism to Zionism.’ You can say that he wanted to somehow nullify the memory of the Diaspora and religion.”

Ornan willed his body to science. He is survived by his wife, Michal, and five children.