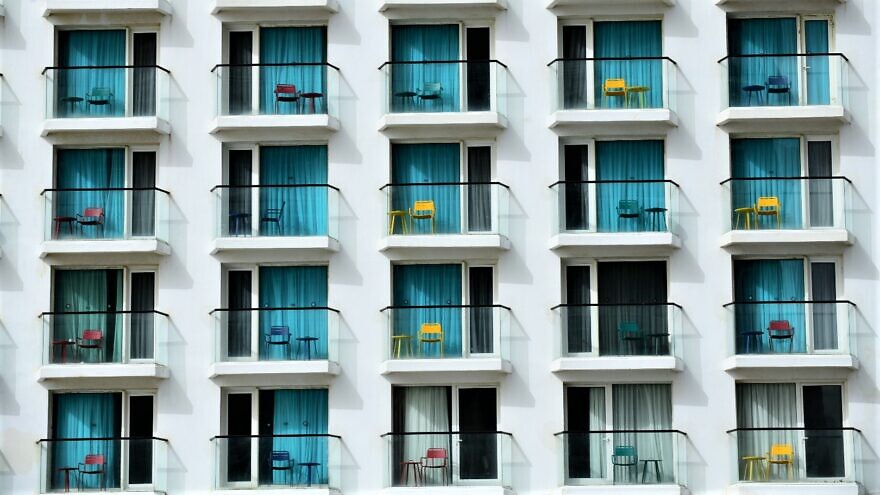 An empty hotel in Tel Aviv near the Mediterranean Sea. Daily Israeli life has largely shut down as more people have been infected with the coronavirus (COVID-19), March 27, 2020. Photo by Tomer Neuberg/Flash90.
Republish this article
349 WORDS
Spread the word.
Help JNS grow!
Share now:

(March 27, 2020 / Israel Hayom) The number of Israelis who have been diagnosed with the coronavirus climbed to 3,035 on Friday. According to the Health Ministry, 12 Israelis have succumbed to COVID-19, the disease caused by the virus, 49 patients remain in serious condition, and 79 Israelis have recovered from it.

The latest fatalities included a 93-year-old man and a 76-year-old woman. Both suffered from pre-existing health conditions, according to the ministry.

Health Ministry director general Moshe Bar Siman Tov said on Thursday that he believes that in a week from now Israel will have 200 people in serious condition from COVID-19.

The next two weeks will be “critical,” he said, warning there is a high potential for further spread of the virus.

Associate director general of the Health Ministry Professor Itamar Grotto, however, said on Friday that the numbers of fatalities and of seriously ill patients was “not as bad as we feared,” adding that the more the public observes the measures imposed by the government, the better off the country will be.

The government has tightened restrictions on all residents, enforcing a lockdown that has shuttered synagogues and non-essential stores, reduced public transportation to 25 percent, and prohibits people from traveling more than 100 meters past their homes except to purchase essential items such as food or to receive medical treatment.

Violators could face hundreds to thousands of shekels in fines, and even as much as six months of imprisonment.

Israeli Prime Minister Benjamin Netanyahu has warned that a full lockdown was most likely inevitable. On Friday, he was scheduled to hold a series of discussions on the issue, as well as on a multibillion-shekels incentive package to help sustain the economy through the crisis and restart it once the pandemic is defeated.

The emergency-aid package will amount to some NIS 50 billion ($13.8 billion), said sources familiar with the issue.