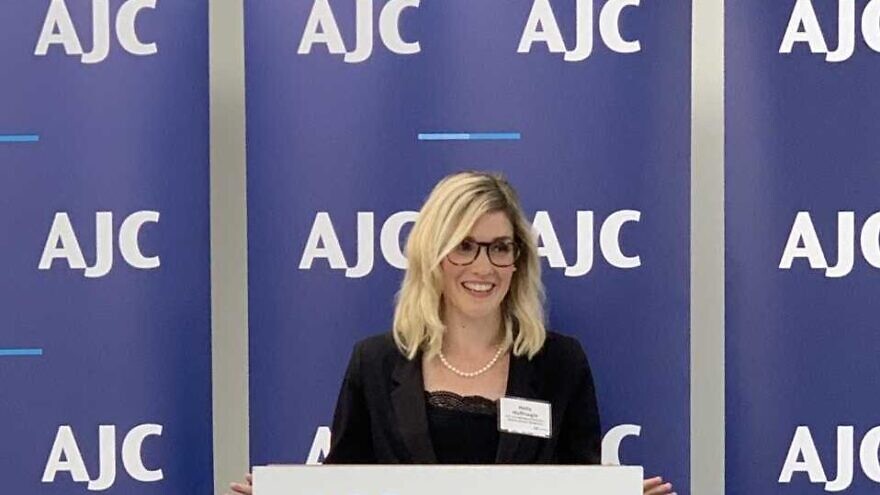 (May 31, 2022 / JNS) American Jewish Committee and E.W. Scripps Company have partnered to combat anti-Semitism in the United States. Some 160 Scripps employees, including news directors and reporters, participated in two training sessions led by AJC staff experts on anti-Semitism and media.

“Journalists who recognize anti-Semitism are more effective in covering incidents targeting Jews and ensuring that their audiences gain a better understanding of this age-old hatred that again is on the rise,” said Holly Huffnagle, AJC’s U.S. director for combating anti-Semitism.

Huffnagle has led similar training sessions for a number of government agencies. This was the first such one for a national media company.

“It’s important for our journalists across the country to understand anti-Semitism and to be equipped to report on it for our audiences,” said Scripps president and CEO Adam Symson. “Scripps works hard to give its journalists the tools and best practices they need to appropriately cover tough and complex issues. We’re fortunate to have the American Jewish Committee’s team share its expertise.”

Manya Brachear Pashman, host of AJC’s podcast “People of the Pod” and a former religion reporter for The Chicago Tribune, and Avi Mayer, AJC managing director of public affairs and senior spokesperson, joined Huffnagle in the training sessions.

“In my three years working for AJC, I have learned so much I wish I had known when I covered religion on a daily basis,” said Brachear Pashman. “There are so many misconceptions, tropes and sensitivities that I overlooked. This is an opportunity to address that information gap for other journalists.”

Findings of AJC’s third annual State of Antisemitism in America Report, based on parallel surveys of the American Jewish and general public populations, were presented to illustrate the severity of the problem in the United States. Translate Hate, AJC’s glossary of commonly used anti-Semitic terms and tropes, and other AJC resources were used to deepen understanding of various forms and sources of the scourge.

Further, about one-third of Americans over the age of 18 said they are not familiar with the term “anti-Semitism.” Some 65% have heard of it, 18% have heard it but are unsure what it means, and 16% have never heard the term.