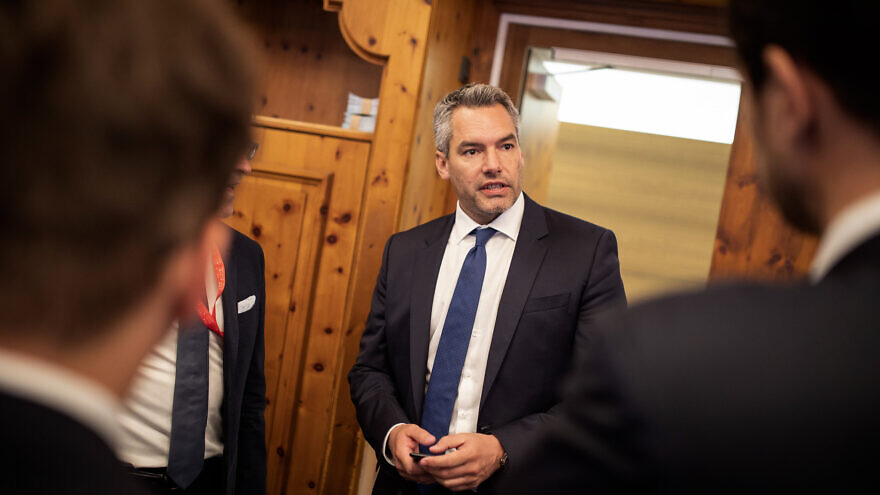 (July 12, 2022 / JNS) Austrian Chancellor Karl Nehammer arrived in Israel for a visit on Monday alongside Austrian Defense Minister Klaudia Tanner and Interior Minister Gerhard Karner in order to discuss security, energy cooperation and Russia’s war on Ukraine, as well as to sign a strategic partnership treaty, according to a report by Euractiv, which covers developments in the European Union.

“A deal with Israel, a historically close partner of Austria, could cover [Israel’s] gas fields in the Mediterranean Sea as Austria is looking for alternate gas suppliers,” said the report.

On June 15, Egypt, Israel and the European Union signed a deal to increase liquified natural-gas sales to E.U. countries that want to end their dependence on Russian energy supplies.

In a written statement released on Friday, Nehammer stated, “Israel is a particularly important partner and friend of Austria. We, therefore, want to further deepen our close relations at all levels.”

In his statement, Nehammer also said, “After the unimaginable atrocities of the Shoah, Austria bears a special historical responsibility and has an obligation for the security of Israel and its citizens.”

The Chancellor, who previously visited Yad Vashem in November 2021 as Interior Minister, toured the Flashes of Memory exhibition of Holocaust photography, according to the Israeli Government Press Office, and participated in a memorial ceremony in the Hall of Remembrance.

An official press release said that, in an emotional statement, Prime Minister Yair Lapid said to Nehammer, “When I took office just last week, somebody asked me what was the most exciting or emotional moment I had in this past year since we formed a government. I didn’t even hesitate for a second, and I said: ‘The most emotional moment I had was with you in Mauthausen concentration camp, when you told me that on behalf of the people of Austria, you apologize for the killing of my grandfather who died there.'”

“I didn’t know it at the time, my mother was watching this at home and she cried,” Lapid said. “She told me she cried like a child. So this is the most significant moment for me in office, and I thank you for this again.”